International students and temporary visa holders applying for Australian permanent residency or work visas have described how they have met the government’s required English language standards. While it took most aspirants several attempts to get the required score, others aced the test without any formal preparation. SBS Punjabi spoke to experts to understand what it takes.

Student visa holder Jaspreet Kaur had to take the English language proficiency test delivered by the Pearson Test of English (PTE) eleven times to achieve the required score for getting permanent residency in Australia.

Ms Kaur, who completed her postgraduate degree in information technology, said she was mentally distraught after failing to crack one of the modules of the computer-operated language test despite multiple attempts.

"I was mentally stressed as I couldn't understand my problem areas because PTE is a computer-operated test", she said.

PTE is one of five test providers used by Australia’s immigration department. Pearson uses a voice-recognition system to test the applicant's speaking proficiency, and a computer then assesses the audio recordings. Jaspreet Kaur got the desired score after 11 attempts.
Supplied by Jaspreet kaur

Ms Kaur, who took her first attempt in 2018, shared that it took her nearly two years and thousands of dollars in test fees to attain her permanent residency.

"After two years of continuous efforts, finally, I finally got my permanent residency in 2020," she said.

'Practice is the key to ace PTE'

While Ms Kaur's case is not an isolated one, some students have mastered the art of outsmarting the computer.

Amandeep Kaur, who passed the test in her second attempt without formal coaching, said: "practice is the key to cracking PTE."

"I devoted myself to the test wholeheartedly and also cut down my working days to two days a week while I was preparing for the test at home," the 28-year-old said.

She added that repeat practice tests could get students the desired results. Melbourne-based PTE trainer who runs a coaching centre in CBD said the best method to ace PTE is to understand each of the four modules and how they influence each other.

"Understanding PTE is the foremost step. For example, if you attempt the speaking module, it's not only going to give you a score for speaking, rather it's going to influence other modules as well.

"So it's essential to understand how each module is scored and evaluated before starting the preparation," he said.

Mr Khanna, whose TikTok videos on PTE strategy garner millions of views, said speaking is the most important module, while listening is the lengthiest one.

Mr Khanna said another recurrent problem that students fail to address is issues related to their pitch.

"Being an automated English proficiency test that used voice technology to evaluate applicants, sometimes the computer algorithm fails to pick up the applicant's tone or accent, which often results in low scores.

"We often teach students techniques to ensure their pitch is accurate and they are positioned before the mic in a way that their voice is adequately registered," he added.

Mr Khanna said that PTE is a repetitive exam that assesses language based on a set pattern using different test materials that sometimes repeat.

"Continuously giving PTE test within a few days works for some, but not for all. However, if you are very close to getting your desired score, you may want to try this trick", he said. Mr Khanna said students and other aspirants must not rely completely on the study material that is available online.

"Students can make use of mock tests for practice, but they must not trust the feedback or the scores generated by random websites.

"Pearson's algorithm is a lot smarter and cannot be compared to the random resources available on the internet," he said.

Mr Khanna advised that students who fail to get the desired score even after several attempts must take a break to reevaluate their skills before taking a shot at another attempt.

Click on the player in the picture above to listen to the interviews in Punjabi. 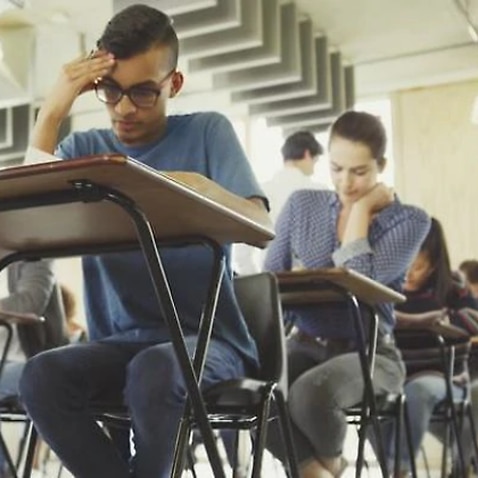