Shahlaa Shaker was unable to say goodbye to her 83-year-old father who died alone in Liverpool Hospital from COVID-19 in July.

She tells SBS Arabic24 that the infection proved too much for his frail condition.

Shaker Saleh was hospitalised for three weeks before his death, after catching the virus at Liverpool Hospital.

"He caught the virus from one of the nurses at Liverpool Hospital when he was there for treatment of a stroke he suffered," his daughter says. Shaker Saleh arrived in Australia in 1999.
Supplied by Shahlaa Shaker

The nurse who had received one Pfizer vaccine dose worked while unknowingly infectious in the hospital's geriatric and neurology wards.

Ms Shaker says her father hadn't received a vaccine because he previously suffered from blood clots and his doctor recommended against taking the jabs available.

A refugee from Iraq, Mr Saleh arrived in Australia in 1999 and his daughter followed ten years later.

The pair formed the Hymiana Mandaean Social Group to provide support for older members of their community, many of whom had also come from countries ravaged by war.

SBS News: Doherty Institute insists it will be safe for Australia to re-open at 70-80 per cent vaccination

A distraught Ms Shaker says the worst part was not being able to say goodbye.

She was only allowed to check on him via phone calls with the supervising physician present.

"I didn't see him. I couldn't say goodbye.

“The last time we spoke he was in such bad shape that all he could manage was to say ‘ha’.” She says after several requests, she managed to see him one last time through a video call on a tablet.

The catalyst for her father's death was the “slow” rollout of vaccines, she believes.

"If we had all received the vaccine by now, we would have herd immunity.

“People are on their third jabs in many countries and we're not even done with the first jab here yet."

A student nurse, 29 patients and seven staff members tested positive since the first case in Liverpool Hospital was recorded on July 24.

Eleven of those patients have died since.

As part of new protocols, all health staff will be required to be fully vaccinated by the end of November, and to have their first dose by September 30. Greenacre resident Moustafa Marei, his wife and their two children were all infected with the Delta variant during the most recent Sydney outbreak.

While they all survived, Mr Marei describes their ordeal as "brutal".

"We all suffered high fevers, muscle aches and loss of taste, smell and appetite.

I lost five kilograms during the first week and the cough was so bad, we coughed blood.

He says the infection was so bad that he and his wife were barely able to care for their five-year-old daughter and two-year-old son.

He’s grateful to their neighbours for assisting during the hardest period.

"It was all thanks to my friends and neighbours who did not forsake us during this difficult time.

“They brought us food and everything we needed, even kids toys. They would drop it all at the door and leave.”

Mr Marei says it was the period in which he was waiting for the Pfizer vaccine to become available that he was infected.

“I knew AstraZeneca was effective, but I was convinced Pfizer is much better.

"The wait time to book a vaccination appointment was two to three months so I decided to wait for new doses to arrive. That's when we got infected.

I advise everyone to get vaccinated because the symptoms were severe and not easy to deal with.

New South Wales has recorded thousands of COVID-19 infections over the past two months, stemming from a cluster in Bondi. 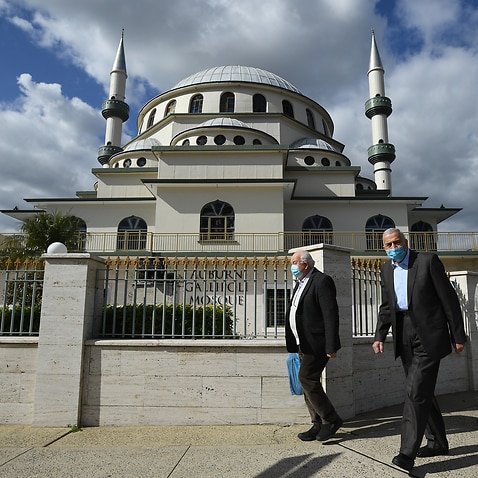 She said the state’s vaccination rate was among the highest in the world, with predictions that it would reach its target of 6 million jabs one week earlier than expected.

Reaching the target would prompt some restrictions to be eased for some people, according to the premier.

The specifics of the easing of restrictions are expected to be announced in late August.