Staff and patients at the Royal Melbourne Hospital say a painting donated by a Hazara artist who is currently in immigration detention has brought "brightness" to them.

Artist and asylum seeker Naser Moradi has depicted the efforts of healthcare workers in combating coronavirus and donated the painting to the Royal Melbourne Hospital.

“The efforts of doctors and nurses in the current situation are appreciated by all people,” Mr Moradi told SBS Dari, from detention where he has been for more than six years.

“And, especially in this very difficult atmosphere that swept over the whole of society, changed not only Australia but the whole world, and almost everyone was seeking to hide [from the virus], but only doctors and nurses were fighting on the frontline, defending the people and combating the coronavirus very hard." Doctors and nurses at the Royal Melbourne Hospital's urology ward posing for a photo with Naser Moradi's painting.
SBS Dari

The artwork was donated to the facility and is now being hung on a wall of the nursing station of the hospital’s urology ward where Mr Moradi was once treated.

The ward was converted to cater for COVID-19 patients at the height of the pandemic in Victoria in 2020.

RMH head of urology Professor Nathan Lawrentschuk, who treated Mr Moradi in 2017, said the painting has brought "joy and brightness" to them. 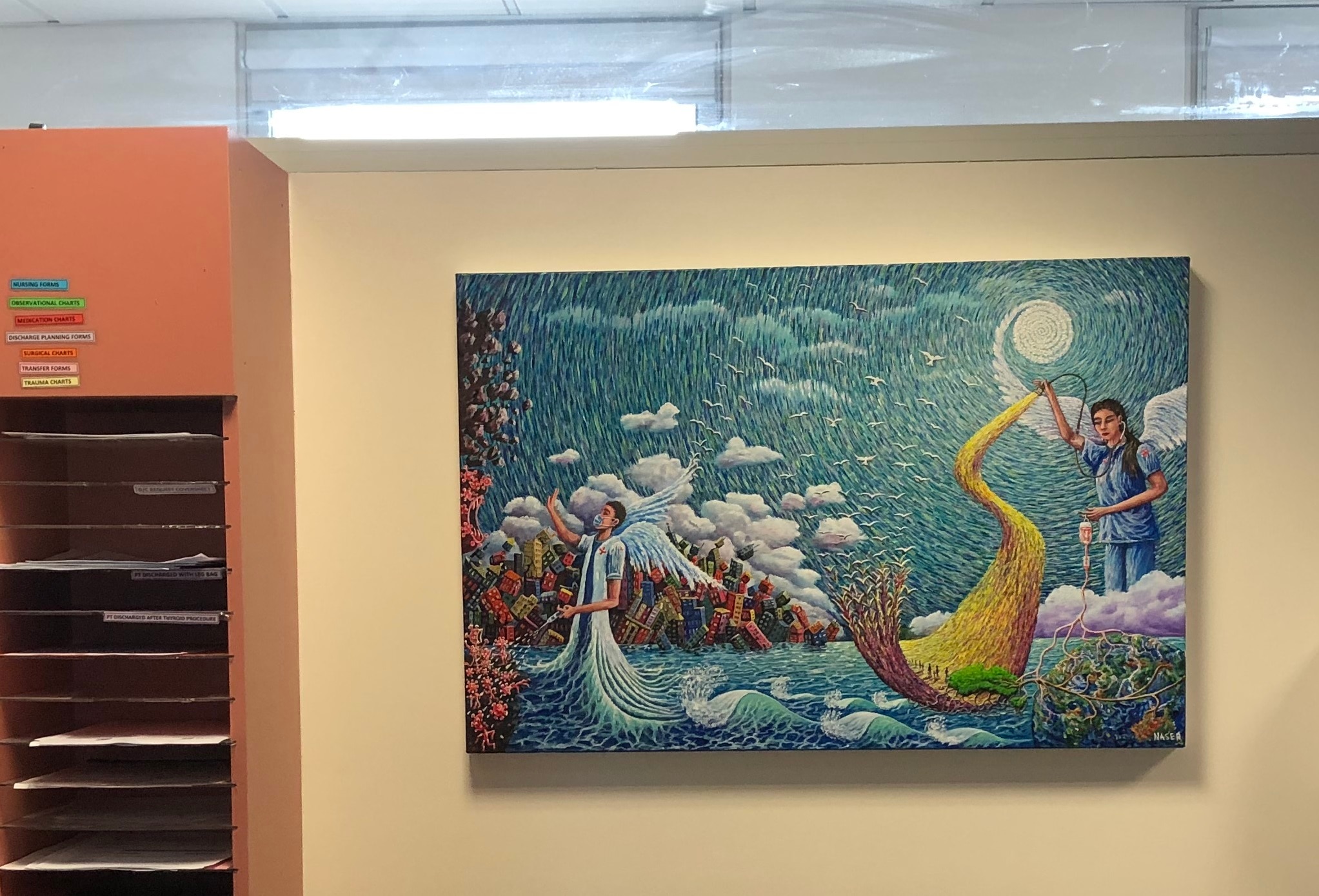 “To see the painting for the first time today, it brings joy, because It’s colourful, there is obviously a story behind it which really gives any piece of artwork, I think, that extra meaning,” he told SBS Dari.

“And, I think, for the ward, for the nurses, for the doctors, for the other healthcare workers to look upon the wall and see that brightness amongst what can be, you know, sometimes dull, serious, … it just gives brightness and a smile to your face.

“…it’s giving a piece of him back to the people who he feels helped him, and we recognise that as well, so I think it’s going to give a lot of joy to people and I think it may even start some conversations around people in his situation.” 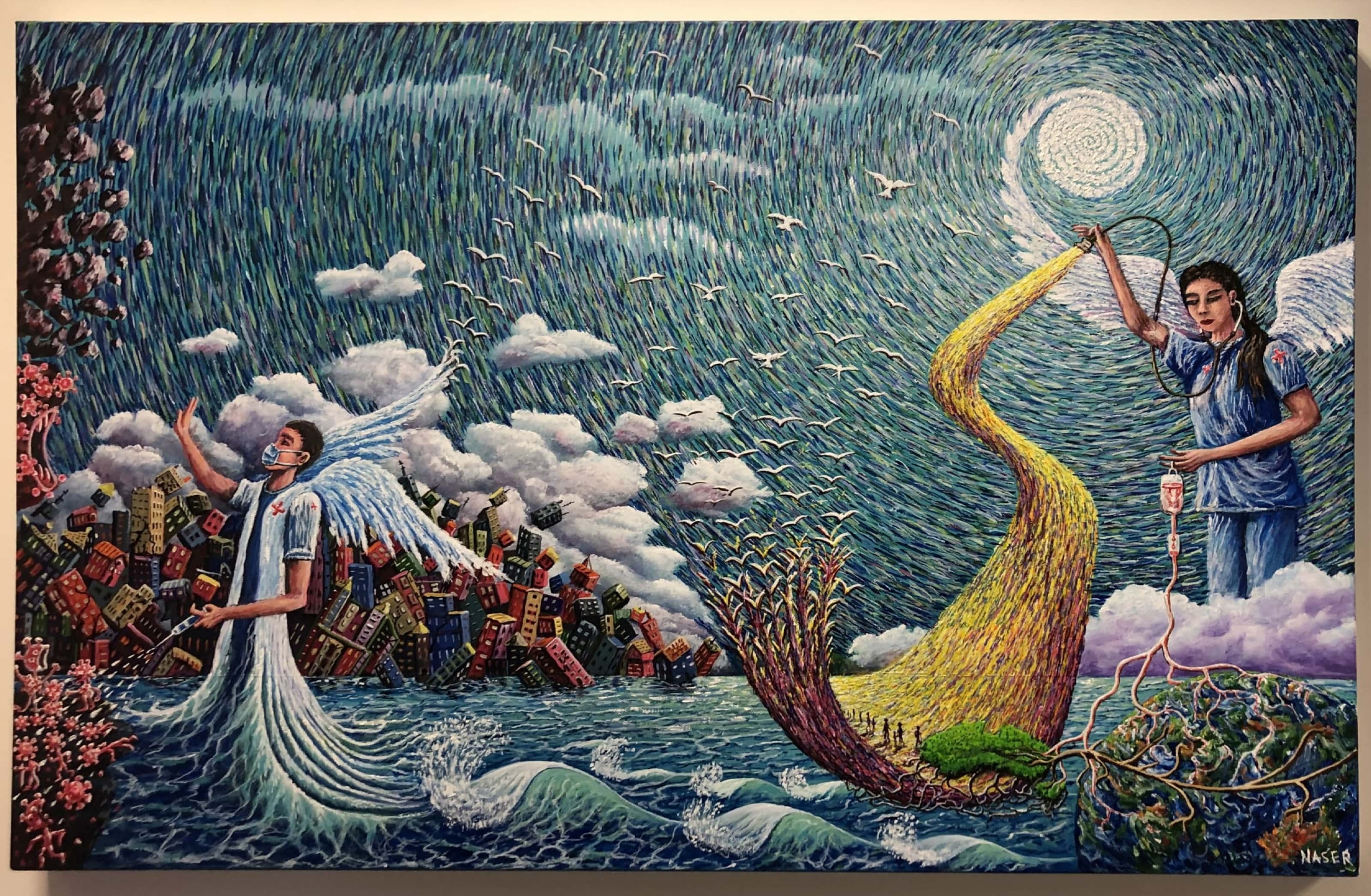 On the left of the canvas, COVID-19 is destroying the world's habitat - the buildings are a symbol of the world - while a doctor, like an angel, emerges from the sea, blocking the virus with an empty hand and a syringe from above and beyond, Mr Moradi explains.

To the right, an angel in the form of a nurse emerges from above the clouds, rescuing Australia and the planet and keeps it green with the light that shines from the drum of her stethoscope and a serum that pumps “energy and fresh blood” to them.

He said the white circle that has emerged from one of her wings, symbolises the light of the sun or the moon.

The birds are symbols of freedom and the colourful sky symbolises the diversity of people on the planet. 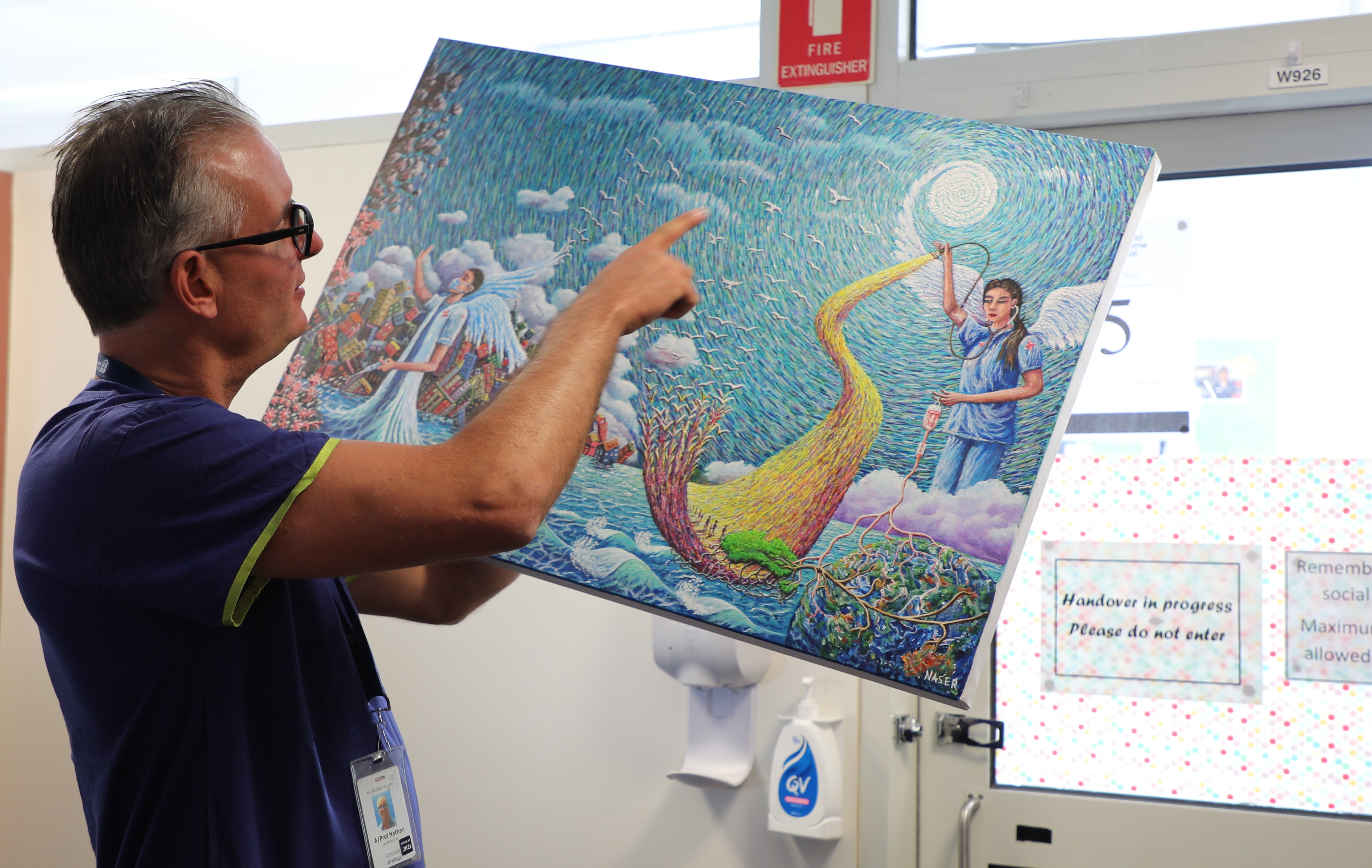 Mr Moradi is a Hazara asylum seeker from Afghanistan who has been in detention for more than six years, a period he spent perfecting his painting skills.

He is currently being held at Melbourne Immigration Transit Accommodation (MITA).

He has so far created more than 200 artworks which have been exhibited several times across the country.

Prof Lawrentschuk describes the situation of Mr Moradi and other asylum seekers as one of “hope and desperation”. One of many Naser Moradi's paintings on the walls of the Melbourne Immigration Transit Accommodation.
Supplied/Naser Moradi

“Over the years, I’ve been involved with many patients in his position who have, for circumstances, had to leave their home country and they’ve found themselves in detention centres in Australia, and indeed, we like to be advocates for people like Naser,” he said.

“You know, they’re desperate to be outside of the situation that they’re in, but they also need to maintain their hope that they can have a future which is better than the past they’re leaving behind."

Prof Lawrentschuk said people in Mr Moradi's condition don’t necessarily have access to the healthcare that the rest of the people in the Australian community have and can be immunosuppressed and vulnerable to COVID-19.

Mr Moradi said that while living in limbo and due to the situation in his home country and the time he has spent in detention, his physical and mental health have been impacted. But he hasn't given up hope. 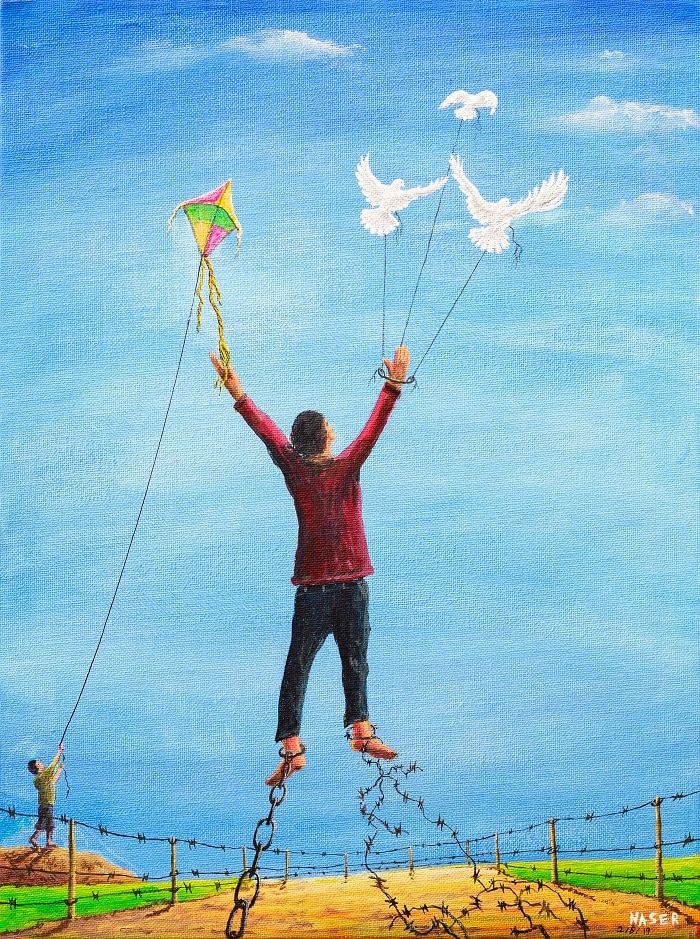 Mr Moradi's works have been exhibited around Australia.
Supplied

“Sometimes I don’t understand at all how a human being can continue to live in this kind of circumstance and not lose hope,” he said.

“And, regardless of that, I try my best to never lose my hope and to do whatever I can for friends, the community and the people.