DOWNLOAD 21.63 MB
SUBSCRIBE
Shady El-Agamy had hoped to secure work as an engineer but was forced to look elsewhere to make ends meet. Source: Amanda Wood

Egyptian Shady El-Agamy couldn't find a job as an engineer in Australia, so he took a job as a stableboy. That decision has opened doors that he never thought possible in his new homeland.

In May 2018, a young and hopeful Shady El-Agamy arrived at Sydney International Airport. After a long journey that took the better part of a year, he was eager to start his new life in Australia.

With an engineering degree under his belt and the unwavering confidence of youth, he rented an apartment in the suburb of Rose Bay, assured that he would soon secure a job in his chosen field at a respectable Australian company.

After all, he came here on a skilled migrant visa, and he thought it was only fair to assume Australia needed people of his professional experience.

Though much to his surprise, the months went by and his resume received little to no attention.

The responses lacked diversity and ranged between, "your degree isn't recognised", "you need local experience" or no response at all.

He quickly realised that his dwindling savings would eventually mean one thing - he'd have to accept whatever work he could find in order to survive.

As revealed by SBS Arabic24 in 2019, Shady decided to take a job as a stableboy for renowned horse trainer Gai Waterhouse.

To the uninitiated, this is the most entry-level, or "lowliest", position on a horse farm, or at least that's how Shady saw it. Shady in the beginning of his life in Australia, cleaning a horse working at Gai Waterhouse & Adrian Bott Racing.
supplied

Going from being an engineer working on mega projects in Egypt to shovelling horse faeces in a short few months was enough to make Shady question his move to Australia altogether.

"I was upset and resented my whole situation. How did it turn out like this?” he laments.

"The work was hard, and the hours were ungodly, but I thought to myself this will just be a temporary solution"

Little did he know, this experience was about to transform his entire life.

Where is he now?

In September, SBS Arabic24 caught up with Shady to see how he was faring since we last checked in.

He says not only did he continue working for Gai Waterhouse,  but he is loving every bit of it.

He says he fell in love with horses, horse racing and all things equestrian. 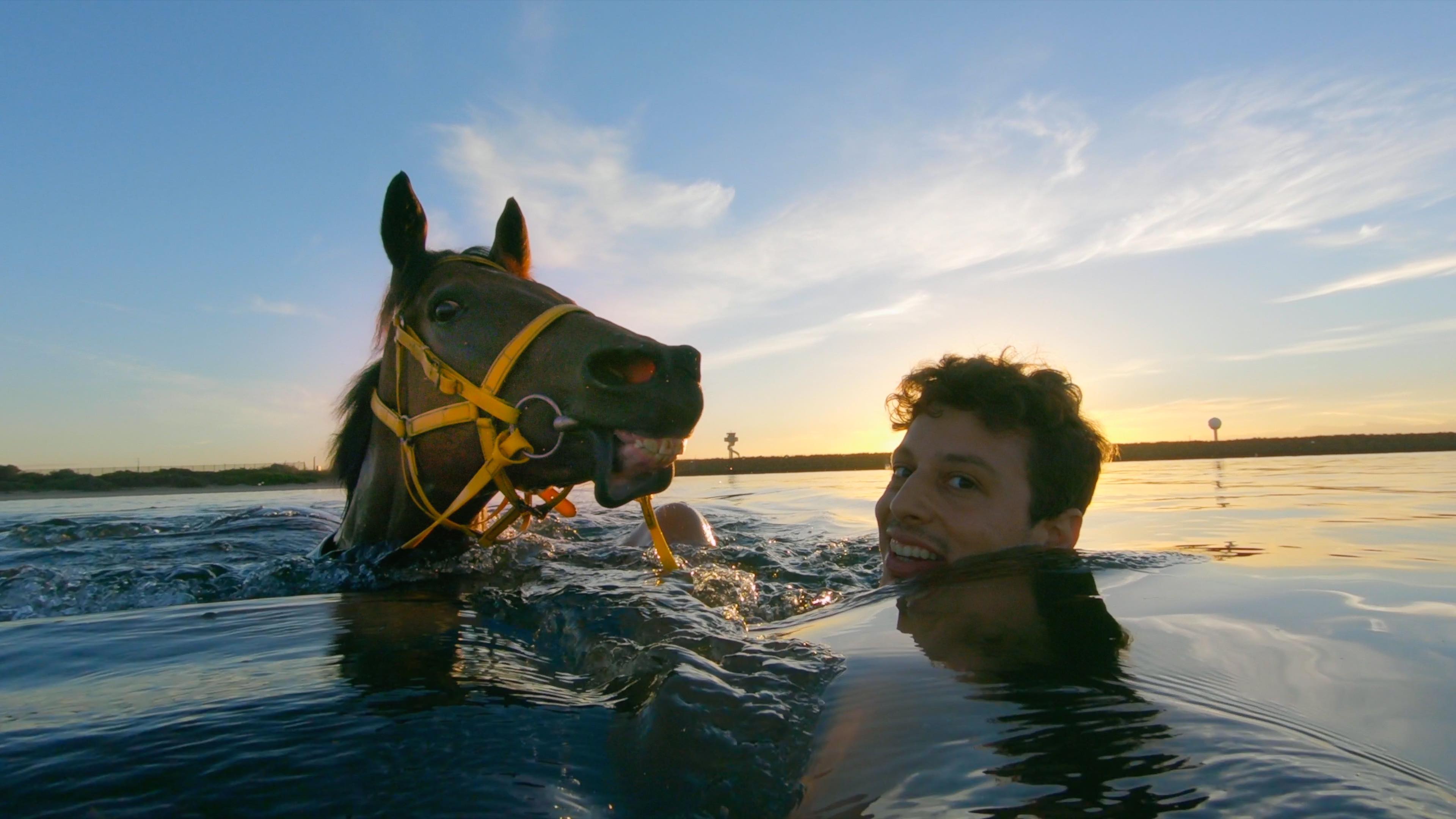 Shady El-Agamy taking one of the race horses for a swim at the beach as part of their training.
supplied

Over the past two years, he says he worked hard, gained experience, asked for more shifts, and eventually got promoted to a track rider.

To his delight, he is no longer shovelling faeces.

He now gets to ride the horses, warm them up for training with the jockeys and even takes them for swims at the beach.

Shady says he thrived in his new field and before he knew it, he had completely foregone his original field of work and study.

Gai Waterhourse even gave Shady one of his first opportunities to create promotional videos for her company. A job he gratefully accepted.

"I got the chance to make new friends and contacts I never would've met."

This gave him exposure and allowed him to find other clients for his new business as a filmmaker.

His promotions meant more money which eventually allowed him to buy better cameras and filming equipment. He even met his current partner working with horses, and they plan to travel around Australia together.

Before the coronavirus pandemic hit the world, the couple planned to accept new positions at different horse training facilities in Queensland, which is now on ice.

Shady says he never thought things could turn out this way for him.

He believes his attitude of “making the best out of your situation” played a great role in his new life in Australia.

"Everyone should know themselves and invest a bit of time searching for what makes them truly happy.

"If you have a goal and you keep working towards it, you will eventually achieve it."