While many know Australia was one of the first nations to recognise an independent Bangladesh 50 years ago, few are aware of the Dutch-Australian commando who was instrumental in that fight for freedom.

This year marks the 50th anniversary of the independence of Bangladesh. Australia was amongst the first few in the world to recognise Bangladesh as a separate country. Australia also became the country that Dutchman William A S Ouderland called home after he fought in Bangladesh’s War of Liberation, for which he was conferred the country’s gallantry award.

William Abraham Simon Ouderland was born in Amsterdam on 6 December 1918. He went to Dhaka – then spelled Dacca, the capital of East Pakistan – in 1970 as the managing director of Bata Shoe Company. He went there to do an office job but ended up a covert commando.

He moved to Australia after retiring from his job. Bangladesh conferred upon him a gallantary award for his services. This made him famous amongst Bangladeshis all over the world, who began to search for him.

Dr Qaiyum Pervez, now a resident of Sydney, was a freedom fighter in Bangladesh’s War of Liberation in 1971. He found Mr Ouderland in Perth.

He brought this forgotten freedom fighter into prominence, man who had no relations with the Bangla people before 1971, but developed a lasting relationship with the newly-formed country we know as Bangladesh today. Nigel Bowen was the Australian foreign minister when Bangladesh was recognised as a new country.
Public Domain / NAA

Little did he know that Australia, the country he would make his new home soon after the war, will be amongst the first few developed countries to recognise Bangladesh as a new country. On 31 January 1972, Nigel Bowen, the then foreign minister of Australia, formally recognised the Government of Bangladesh.

Separated in Bangladesh, united in Australia

Dr Qaiyum Parvez, now a senior lecturer at the University of Western Sydney weighs in on his relationship with Mr Ouderland.

“When he retired, he moved to Australia and began living in Perth. He had a massive heart attack and underwent a bypass surgery. I learnt about it and contacted his wife, Maria,” recalls Dr Qaiyum.

He sent her an English translation of a poem written by him in Bangla on Mr Ouderland.

“I contacted Maria again, who said that she had read the poem to him. He could neither speak a word nor stop his tears,” recalls Dr Qaiyum. Mr Ouderland died in Perth shortly after that.

“When I heard that he had passed away, I contacted the Bangladeshi High Commissioner in Canberra as the Bangladesh government had announced that any freedom fighter, native or foreigner, who took part in our War of Liberation, will be given state honour at the time of his death” says Dr Qaiyum.

“Perth is home to many Bangladeshi freedom fighters. We got condolence messages from our prime minister and foreign minister. We were sent the Bangladesh national flag to put on his coffin. This is how we gave him a funeral with full state honours,” recollects Dr Qaiyum.

Bangladesh has conferred 426 freedom fighters with its fourth highest gallantry title, the 'Bir Pratik’, meaning ‘symbol of bravery’. Mr Ouderland was one of them and the only foreigner to be decorated. “Several dignitaries from Bangladesh, who later visited Australia, met Maria on behalf of the government and expressed their gratitude for the service of her husband,” he adds.

Mr Ouderland was shocked when he witnessed the massacre of East Pakistanis in Dacca on the night 25 March 1971.

Named 'Operation Searchlight', it was a military operation conducted by the Pakistan Army in Dacca to quell the uprising by thousands of Bangla-speaking East Pakistanis.

Under the leadership of Sheikh Mujibur Rehman, known as the father of the Nation later, this uprising assumed gigantic proportions and became a civil disobedience movement. 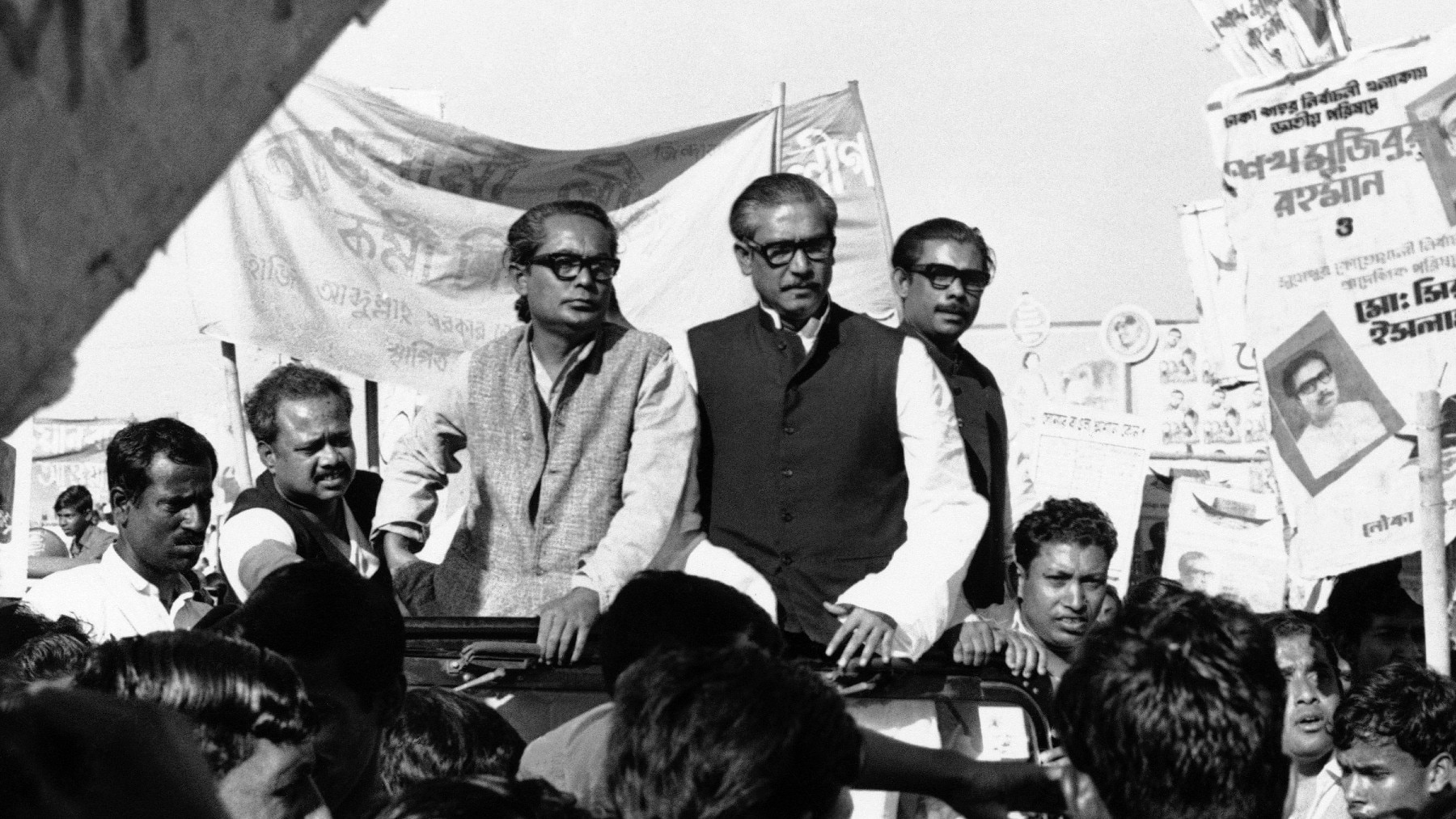 Mr Rehman’s political party, Awami League, had won a majority in national elections, but their rulers in West Pakistan rejected the results. This spawned a mass revolt.

They soon began demanding independence from Pakistan, which ruled over them from more than 1,000 miles away but left issues closer home – like self-rule and their freedom to speak Bangla – unaddressed.

Mr Ouderland used his professional advantage as the head of Bata in Bangladesh to establish friendly relations with the upper echelons of the Pakistani military regime and gathered information for the Bangla freedom fighters.

had fought as a guerrilla commando in World War II. Armed with that experience, he secretly helped the freedom fighters in ways more than food and finance. He also secretly trained them in guerrilla warfare.

Eventually, he headed for the battleground. With his planning and management, several operations were undertaken in and around Dhaka. Dr Qaiyum painfully recalls the time when he was arrested by the Pakistan army during the war.

“They tortured me a lot. I was taken to a room of 40 people. Each night, they took one or two and they never returned. Every night, I thought, would be my last night. But fortunately, I lived to see this day,” he recollects.

The birth of Bangladesh

On 26 March 1971, Bangladesh came into being and declared itself a free country and severed ties with Pakistan. The proclamation of independence was ratified later on 10 April 1971.

However, Bangladesh commemorates its Victory Day on 16 December, when the Pakistan Army surrendered to the Indian army at Dhaka and signed the Instrument of Surrender. 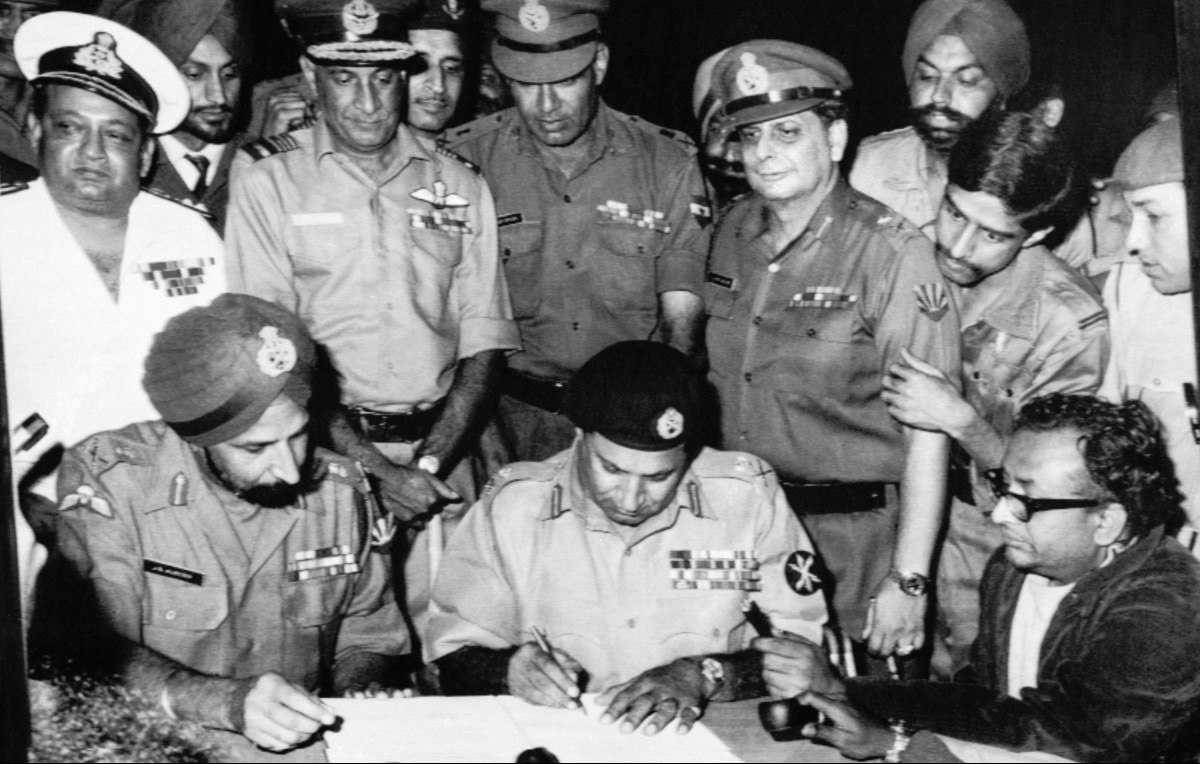 Pakistan’s Lt. Gen. AAK Niazi surrendered to Lt. Gen. J S Aurora, who was the joint commander of the Bangladeshi Mukti Bahini (meaning the vehicle of freedom) and Indian armed forces. Over 93,000 soldiers of the Pakistan Army surrendered to India, amongst the largest in world military history.

Listen to Dr Qaiyum Parvez's interview in English by clicking on the audio player inside the picture at the top of the page.