Hans Grimus arrived in Australia in 1959 by himself with nothing but £16 in his pocket and found his way into the skiing industry by pure coincidence. Despite hailing from snowy Austria, the now 76-year-old actually had no skiing experience himself, but he was to become a pioneer for Australia's winter sports industry.

Poor of options and opportunities in post-war Austria, Hans Grimus heard of a friend's plan to migrate to Australia.

"I had nothing to lose," says Grimus. "Instantly I said 'yes I´m coming too.'"

For the then 18-year-old it would be a life-changing decision.

"But, as I always say, the women get in between," he jokes. "Both my friends couldn't make it. One fell in love, the other didn't get the permission from his grandmother. So I was all by myself."

After his arrival, he was employed at the Snowy Mountains Hydro-Electric Scheme for seven months. A tough time.

"I almost died at the Snowy Mountains. In three various occasions."

"I almost died at the Snowy Mountains. In three various occasions," Grimus tells SBS German. "We were working for 16 hours."

"Once I was completely exhausted, walking along the rails. I slipped and an approaching train almost hit me."

In spite of hailing from snowy Austria, Grimus was in fact a total novice when it came to skiing. You wouldn't expect an Austrian native to never have come across the national sport in his youth.

"There was a bit of cross-country skiing," explains Grimus. "But I come from a rather flat area. I didn't know how to ski back then."

Hans was rather talented at soccer and made a good goal keeper in Australia - until he broke his finger and gave up on playing.

It was by coincidence that he came across a fellow Austrian acquaintance in a St Kilda restaurant one night, who hepled him obtain a job opportunity in the winter sport industry. "I started as a lift operator and soon became the industry's manager and director," Grimus tells SBS German of his early years at Mt Buller.

He was a man who always rolled up his sleeves when the area's lift infrastructure was built. "There was dynamite, bulldozers... and all kind of methods," Grimus says.

"It's hard to believe today how hard it was and how much work we put into it."

In honour of one of its pioneers, the Mr Buller area named one of its chairlifts, which goes all the way up to the top, "Grimus."

"I consider myself very lucky. I don´t take anything I have achieved for granted."

In 1969, Hans opened his guest house, but was forced to sell it three years later as he ran out of money.

After buying it back, he steadily expanded - 35 rooms have grown to 120.

"I consider myself very lucky," says Grimus. "I don't take anything I have achieved for granted."

The Hotel Pension Grimus has since been awarded with the "World Travel Award" as Australia's Best Ski Lodge for eight times.

However, Hans doesn't hide the challenges hoteliers are facing. "Our season is incredibly short, roughly 12-14 weeks."

Australia's skiing resorts also have strong competitors overseas. "We can only make money with beginners and average skiers. The good ones don't stay in Australia."

The "Skiing Dog" who earned fame

The well-known character in the Mt Buller area was accompanied for many years by his four-legged friend "Captain," a German shepherd he had once won in a skiing competition.

"I trained him. This dog could do anything, he even knew how to ski," Hans remembers today.

After a Melbourne newspaper published the story, the skiing dog made headlines around the globe.

"Interestingly, I had issues with the Health Department. So I fought in court and payed a fine. But the dog had to stay with me."

Son Anton has represented Australia at the last Winter Olympics 2014 in Sotchi and currently prepares for Pyeongchang 2018.

"He's very talented, but his area freestyle skiing is a tough one", Hans says. 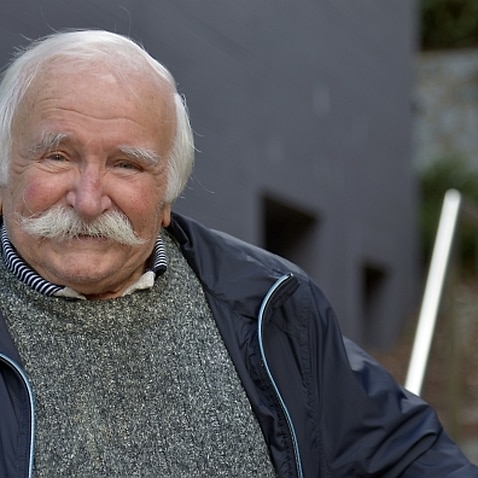 Australia's oldest living Olympian is still passionate about skiing at 95