‘I found love in cancer’: How a cancer survivor found romance amid her health journey

Maureen Roco was diagnosed with stage 3 breast cancer during the pandemic. In the middle of a tough battle against cancer, she also found the love of her life.

While Maureen Roco was sunbathing in Bali Indonesia, she felt a lump on her breast. She immediately underwent a comprehensive medical examination and received the worst news she could ever imagine.

“I was shocked when I was diagnosed with stage 3 breast cancer. I didn't expect I'd get cancer at age 33," Maureen Roco says in an interview with SBS Filipino love down under.

Ms Roco shares that she felt deflated upon hearing the doctor's news and had no one to turn to during her cancer treatment.

Although she has little time for love due to battling cancer, Ms Roco silently hoped for someone to support her through her cancer journey.

"When I had cancer, having someone was the least of my priority. The number one goal was to beat cancer. But when I was going through treatment, I felt so tired after it, I couldn’t bother getting up the bed. I felt really sick. Those were the times when I hoped someone was there to support me."

Love is a therapy

Ms Roco who is an international student found love in the most unexpected way.

As she was about to undergo her chemotherapy treatment, she shares she needed friends to drive her to the hospital so she asked for help.

She got in touch with an old friend she met back in 2019 when she worked at a restaurant.

Ms Roco says that apart from her close friends, her friend turned partner drove her every week to the hospital and supported her throughout her chemo treatment.

Spending time together during her treatment became an opportunity for them to get to know one another. After a one year battle against cancer, aureen Roco foundthe love of her life.
Maureen Roco

Finding love in the most unexpected way

After a one-year battle against cancer, Ms Roco says it was in October 2020 when she was declared cancer-free.

Although they were always in touch, there was a point when Ms Roco says she decided to take a break to focus on her healing.

"I told him let's see how it goes after I beat my cancer journey and if we really like each other then we can always find each other. I just really need this time for me. I needed all my strength and focus to heal."

She shares that she was also hesitant to be with him at first because of the huge 10-year age gap.

"At first, I didn't want to be with him because I'm 10 years older and we did not have anything in common. But as I get to know him, I discovered he was a good person."

'I found love in cancer'

In December 2020 when the lockdown was lifted, the two had the opportunity to reconnect again.

"It was really hard to explain to him what I'm going through. In December we dated slowly and he showed his true intention."

In the late weeks of December, Ms Roco traveled the Byron bay up to the Sunshine Coast to take a much needed holiday. To her surprise, he turned up in Queensland to confess his love for her.

"When I had cancer I thought it was the end of my life. I prayed to God that if I overcome this, I hope I will meet someone in the future that will make me think everything I fought for was worth it."

Their relationship deepened and the two became an exclusive couple in January 2021. 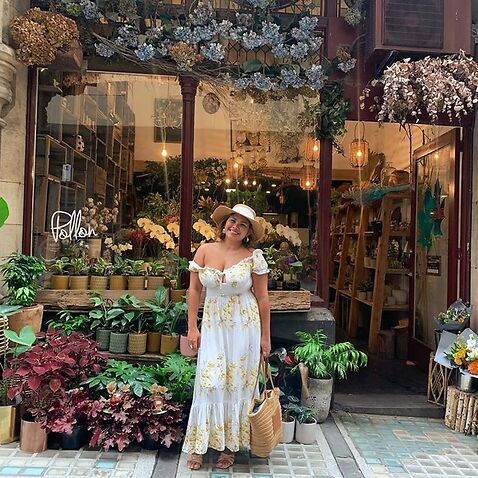