DOWNLOAD 21.41
SUBSCRIBE
Elias Jahshan is an editor and journalist. He was born and raised in the suburb of Parramatta in Western Sydney. Source: Elias Jahshan

In the first episode of ‘My Arab Identity’ season two, journalist Elias Jahshan shares the challenges he faced as a child after losing his hearing, and as a teenager who hid his Arab identity. He also talks about how coming out as a gay man challenged culturally-imposed stigmas which threatened to derail the relationship with his family.

Challenges began in Elias Jahshan's life when he was just five years old.

"My kindergarten teacher called out my name and I was not responding. The teacher called my mother and told her that she should take me for a hearing test."

His mother rushed to the examination, and it turned out that Jahshan had indeed lost his hearing.

The news came as a shock for the family, as deafness did not run in the bloodline.

It took about a year to get to the bottom of the issue. His ear, nose and throat specialist’s diagnosis was that he had Vestibular Aqueduct Syndrome (EVA), an illness where children usually experience some degree of hearing loss. Jahshan says he was raised in a home full of love, which helped during times when he had to deal with the effects of his hearing loss.

“My sisters and brother spoiled me all the time because there was a big age gap between us. They loved me, took me everywhere with them. I was very lucky to have their love and support. I had a very happy childhood.”

Outside of the home, however, he encountered quite the opposite.

“Sometimes I walked into a room and see some kids laughing and instantly thought they are laughing at me, but I could never know, I had no idea, I could not hear what they were talking about, even if they were close up. A normal hearing person probably could be able to hear them from a few metres away, but I could not.

“When you have those listening skills robbed of you, it does affect your socialising. It took time to come to terms with that."

He remembers that from a young age, his family cultivated a love of their culture, and he used to hear many stories from his father about his hometown in Palestine, and about Lebanon from his mother. 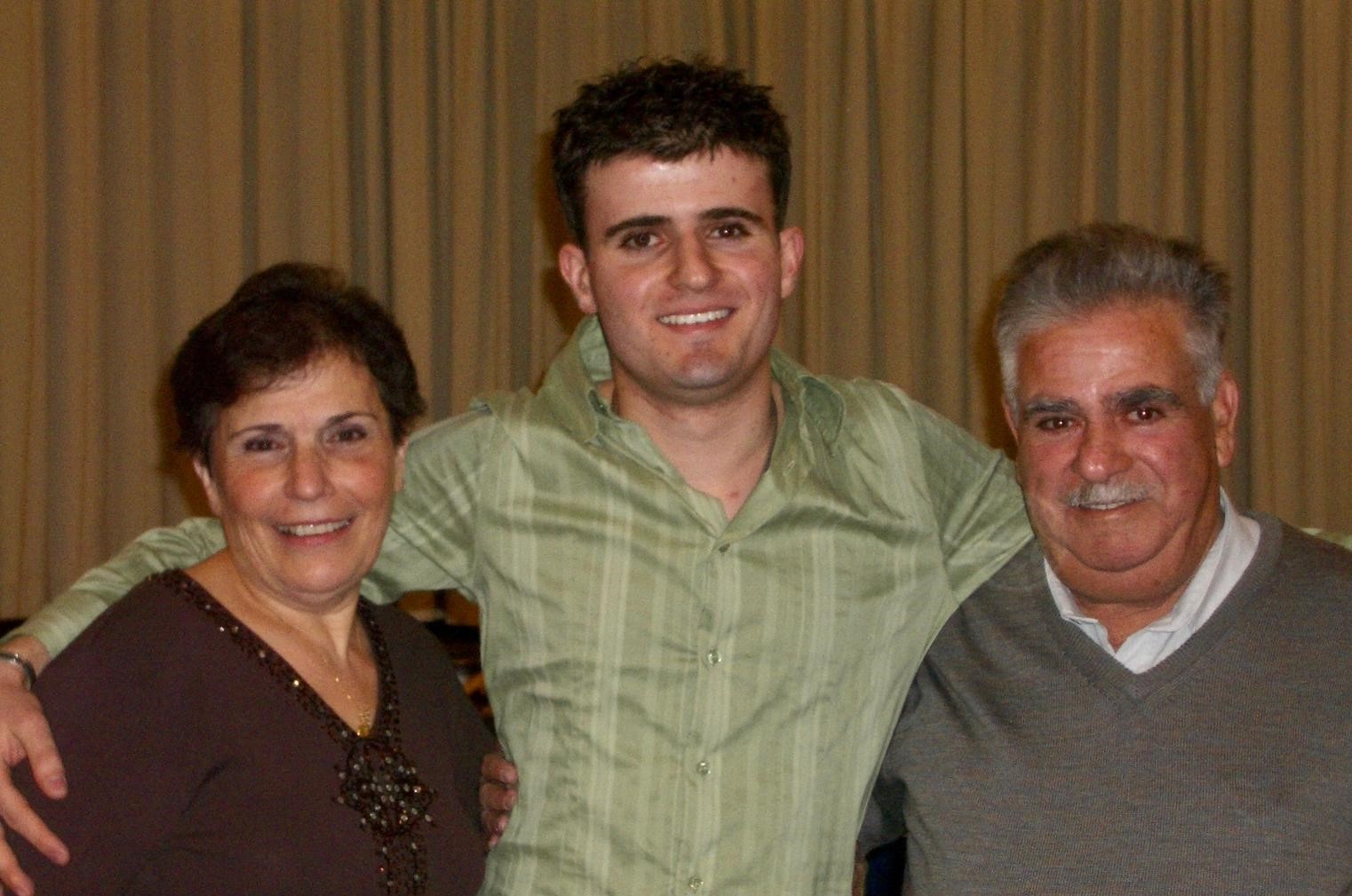 He says his parents were always proud of their Arab culture, and he felt that the family’s attachment to its traditions and the family togetherness became a sacred bond.

He made sure, from a young age, to make his parents and siblings proud.

“Because I was the youngest, it also comes with that expectation I have that instead of two eyes on me from my parents and how well I do in school, I have got my sisters and my brother on my back as well making sure I do well at school. But having said that, the pressure they put on me is nothing compared to the pressure I have put on myself.”

Jahshan faced new challenges at high school, linked to his Palestinian and Arab identity. He felt forced to hide his Palestinian heritage in order to be able to be accepted into the society around him.

“That was all over the media, before 9/11.  But when 9/11 happened, it added another layer of being Palestinian and being Arab at the same time. There was Islamophobia, and racism towards Arabs in general, whether they are Muslims or not. I think that all played a part in the shame I felt with being Palestinian.”

At that time, he felt it wise to attribute his origins to Lebanon solely, especially in front of Australians and other nationalities, but even this solution placed him in trouble on some occasions, because the news linked Arabs at crime gangs.

“Sometimes telling people I was Lebanese came with its own set of challenges because of the gang rapes that were happening in Western Sydney around that time. And how [Arabs] were all over the tabloids and front pages, ‘Gang rapes being led by the youth of middle eastern appearance’.” The challenges of intercultural identity and stereotypes about Arab migrants consumed his energy so much that he ignored a very important aspect of his life, his sexual orientation.

"I remember that day, I hadn't been to school for months. We are at the swimming carnival, the first major event of the school calendar of the year.

“I remember, just being in my own world, looking at all these boys walking around in their Speedos. I didn't understand what that was until later on in life, that was my awakening. I guess that was the moment I was awakened totally.”

Just as he hid his cultural identity before and isolated himself socially, he was able to reject his homosexuality and fought it until he reached university, and he was able to convince himself and those around him of his attraction to girls.

“I told people that I like this girl, I liked that girl, openly talked about all these girls in my life where I thought I had a crush on, but it wasn't really a crush. It was like my cover of trying to prove to people that I'm not gay.”

For him, accepting his homosexuality meant that he would not be a "good Arab son" in the eyes of his family.

"This fact would have made me the bad son. No matter how many other good things I've done, because of the stigma that comes with being gay and homosexuality in the culture.” Elias Jahshan with his mother in Saida, Lebanon 2011. A part of a larger trip around the Middle East.
Elias Jahshan

After he turned 20, he finally accepted the reality, but in complete secrecy.

It was during his final year of university, as an exchange student in France.

There, he felt free to discover this aspect of his identity, away from his family, relatives and friends.

“I had the freedom of being away from the family, being able to explore myself without having to look over my shoulder all the time."

He returned to Australia a few months later, from a trip that gave him a big push to reveal the secret that had strained him for years.

He decided to tell his brother and sisters before they heard it from a stranger.

He turned to his cousins ​​for help and they arranged a meeting secretly from the family, in a hotel room, without giving any introduction as to the reason behind the emergency gathering.

“I have been thinking about this for days and days, and in my mind, I was calculating what I could say and how I am going to say it. But all that I could blow out on the moment was just like, I looked at the floor and I was like 'well, ah I’m gay'.

“Then I shrink back into the corner of the chair and all the worst things possible going through my mind.”

He recalls that his brother's reaction was not welcoming, and the signs of anger on his face were enough to make him feel the loss of his love and respect.

Some people may ask, in a country like Australia that supports gay rights and allows same-sex marriage, why is Jahshan afraid to disclose his sexual orientation?

“I grew up hearing comments or snide remarks about gay people doing this gay person doing that, but in a really negative way. So, I just knew if I would come out that my family would associate me with all these negative remarks, the negative stereotypes, and I did not want to be like that. I didn't want to be the person, an outcast in that way.

“I couldn't imagine what it would be like being cut off from my family because from a young age it drummed into your mind that family is the most important thing and our culture and our identity is so reflective of our family. Our identity and our family are so interchangeable they are not two separate things.”

He says his brother did not cut him off, though he preferred to deny the truth and ignore it.

Unfortunately, a few years later, his father's health deteriorated after he was diagnosed with lung cancer. He was soon on his deathbed.

Jahshan refused to tell his father the truth before he died. He was not ready for a confrontation, and he said that neither the time nor the place was appropriate to burden any family members with a burden greater than the burden of losing their father.

When he was 24, he entered his first official relationship. After one year in this relationship, and what came with it from sleeping outside the house and staying out for long hours during the night, his mother confronted him:

She said, "So what are you doing? Tell me, I'm afraid you are hiding something from me."

I said, "I want to tell you but I can't. I know that if I tell you, you'd feel sad and disappointed with me."

She said, "Are you staying with friends?"

"Then I looked into her eyes, and I didn't even answer yes or no, it was the look that confirmed everything for her."

Jahshan recalls that his mother became very upset, and subsequently rejected the truth, and decided to ignore it.

Despite the sadness that he felt on this day, he was comforted because she got the news from him, and not from anyone else.

When he reached the age of 30, he travelled to London for work, where he experienced a love journey that changed his life.

“In London, I joined a dancing class, which happened to be the same class as Aron and that is how we met. I defiantly had a crush on him. It was till after that showcased was all over, I was like I still want to talk to this guy.

“So, I asked him out to go for lunch one time, and it turned out to be four years’ worth of relationship, and we've been married since 2018.”

If ignoring and rejecting Jahshan’s sexual orientation was easy for his mother and brother in the years before he decided to marry, it would not be easy for them to ignore the reality when he decided to marry and settle down, especially after they got to know Aron.

“The fact that they accept me for who I am as a gay man, and they accept Aaron into the family is such an important thing because for me I can't imagine my life without my family and I think that's something that every single Arab person can relate to especially in the diaspora.” Despite this satisfying resolution to his years-long struggle with his identity, the challenges ahead have not ended, but he says he’s happier now than ever before.

“There are so many contradictions that come with my intersectional identity. That is very messy. I'm gay, I'm deaf I’m Arab, I’m Australian, an immigrant living in the UK as well. And I think that's OK because, at the end of the day, I just want to be me, who I am.”

Elias Jahshan is an editor and journalist. Born and raised in the western Sydney suburb of Parramatta, Elias Jahshan is the son of Lebanese and Palestinian migrants. He was the editor of the Star Observer, Australia’s most prolific and only national LGBT media outlet, for two and a half years. He was the publication’s only editor from a non-English speaking background in its 39-year history. He previously worked for News Corp, and his work has been published by SBS and The New Arab. Elias is also a former board member of the Arab Council Australia.

Follow My Arab Identity on your favourite podcast platform.