Meet the man who loves to cook. Sandeep Pandit will no longer be seen in the competition but says the experiences and memories of MasterChef Australia will stay with him for a long time to come.

The man who dared to dream and revealed culinary secrets of making delicious Indian food to Australian audiences, Sandeep Pandit has bid adieu to the competition.

On Thursday, the only MasterChef Australia contestant till date to win an immunity pin and score a 30 on 30 together was eliminated from the cooking competition.

“I hurt my back and it was very nasty. I was taken to the doctor, was on complete bed rest, started my physiotherapy but I wasn’t my hundred per cent. With pain, it became difficult. To compete in such a fierce competition, the body and mind have to be in tandem,” Sandeep told SBS Hindi after elimination. Mr Pandit, an Indian migrant who works as an Information Technology Project Manager in Melbourne, Victoria, learnt cooking at a young age.

“We were migrants in our own country. My family had to flee from Kashmir and we all started from scratch when we moved to Bengaluru. My parents worked really hard to make ends meet and I started cooking to help my mother,” Sandeep reveals.

It was while cooking at a tender age Sandeep realized how much joy it could bring to others.

“My mother loved it and I learnt to cook Kashmiri and various types of Indian dishes. It was like a therapy,” he says. 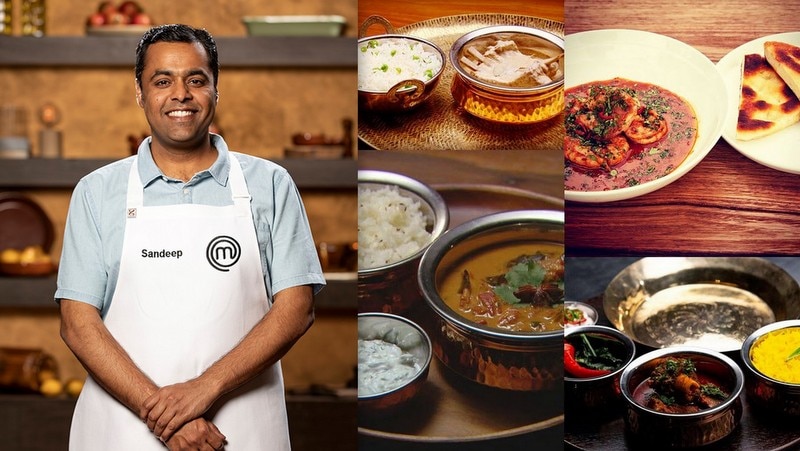 His passion for cooking and his play with Indian spices saw him score 30 on 30 during 2019 season of the show and also earned him an immunity pin.

“I am honoured to be the only contestant who won the immunity pin and the perfect score together. I was thrilled and in a very happy space. Unfortunately, I lost the immunity pin due to my injury,” he explains as the pin used when he could not compete in a round.

Sandeep attributes his exit from the show to his injury. He made the Indian delicacy – Kheer, using honey with puri for the sweet week where the contestants were challenged to create a dessert without using sugar.

He says dessert is not his main strength but it was his injury that kept diverting his attention.

“I wanted to cook something that is close to my heart in the sweet week. It is not that I can’t bake or make ice-creams. But I was keen to make Indian food. I have done pretty well through the season but when your body and mind are not working together, it can be tough to compete at this level,” he says. Sandeep will no longer be seen in the competition but says the experiences and memories of MasterChef Australia will stay with him for a long time to come.

“I have made lifelong friendships and there was this one moment which touched me. I was eliminated but my colleague Tati, who is like my elder sister, broke down. That is when I realized that food really breaks boundaries. I was the one leaving the show but she was so upset,” he says.

Undeterred by elimination, Sandeep has big dreams, from launching his own restaurant to his own website.

“I want to launch a restaurant that serves Barbecue and Biryani, Indian style. Indian cuisine is way beyond curry and I am working on making this dream come true. But I am much closer to launching my food website,” he says.