Is Brexit a failure for the European Union?

Britain's divorce proceedings from the European Union continue, but progress remains slow after the fourth round of formal negotiations.

And until the two parties can reach agreement on key points, what happens next will remain unclear. 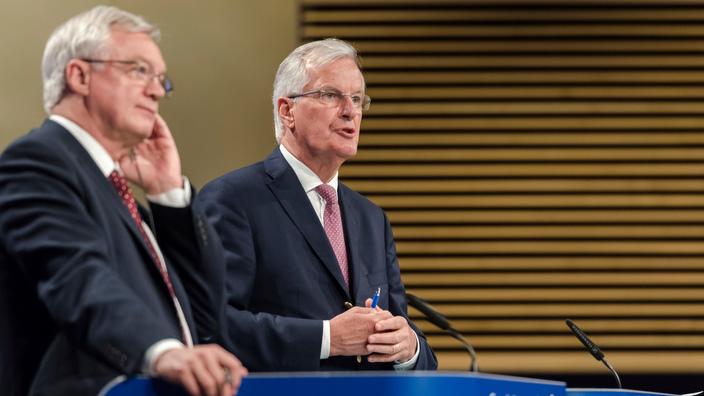 Britain's chief Brexit negotiator, David Davis, and his EU counterpart Michel Barnier have just completed another round of talks over four days in Brussels.

And Mr Barnier says the talks have been constructive, even if progress is slow.

"Ladies and Gentlemen, we have had a constructive week, yes. But we are not yet there, in terms of achieving sufficient progress. Further work is needed in the coming weeks and coming months."

Mr Barnier is keen to move the talks forward, to discuss what happens after Brexit in March 2019.

But there is still work to do to reach that stage.

Mr Davis is positive, though, and says important progress has been made after a speech by Prime Minister Theresa May.

"We made important progress and capitalised on the momentum created by the Prime Minister's speech. We're working quickly through a number of complex  issues, yet there remain some points where further discussion and pragmatism will be required to reach agreement."

One of those key areas is citizens' rights.

Mr Davis has confirmed the withdrawal treaty will guarantee the rights of 3 million EU citizens in Britain and will have what he calls "direct effect" in British law.

That means Britain could not change it through new legislation.

"This is very important. It will give the assurance to our citizens that they will be able to invoke their rights as defined by the wide withdrawal agreement before UK courts. We agreed to guarantee for the citizens concerned that the UK will apply EU law concepts in a manner that is consistent with EU law after Brexit."

But the European Union believes its citizens should have the right to pursue grievances in the EU's own court.

There is also disagreement over the budget. Theresa May says the other 27 countries should not lose out financially from Brexit during the current EU budget period ending after 2020.

But that would cover payments only in 2019 and 2020, which Mr Barnier says is not enough.

He says commitments agreed upon in the current budget should also lead to outward payments in subsequent years.

By 28, Mr Barnier means agreements made when the European Union was comprised of 28 member states with Britain.

The negotiations have been a source of frustration for the rest of Europe.

Dutch foreign minister Bert Koenders has told a news conference in The Hague it is time for Britain to clarify exactly where it stands on the sticking points surrounding Brexit.

"I mentioned that I have some doubts as to the concreteness, and the level of concreteness, where we are now at this moment on the side of United Kingdom. There are gaps there we cannot avoid by (not) saying that, so, yes, there is a great responsibility for the UK to get its house in order internally as soon as possible."

But her attempt to provide some clarity was also a source of mirth for the European Parliament's Brexit coordinator, Guy Verhofstadt.

"I have to tell you that I also know why Theresa May gave her speech in Florence. I presume that I know it. I think she chose Florence because Florentine politics in the 15th Century made her feel at home, I think. You know, backstabbing, betrayal, noble families fighting for power, and so on and so on. So I think that it is an environment that she recognised very well."

Mr Verhofstadt was talking to students at the London School of Economics, where he also said Brexit was negative and a waste of time and energy.

And he described Britain's decision to leave as a failure for the European Union.