Love is in the air: The couple that got engaged at India vs Australia match share their love story

Indian man Dipen Mandaliya proposed to his Australian girlfriend Rose Wimbush during the second One-Day International (ODI) between Australia and India at the Sydney Cricket Ground. They shared their love story with SBS Hindi a day after their engagement went viral world over.

India may have lost the One-Day International series to Australia but one Indian cricket fan couldn’t contain his excitement and happiness on Sunday.

Melbourne-based Dipen Mandaliya proposed to his girlfriend Rose Wimbush during the match and she said ‘Yes’.

“I moved to Australia four years ago. I was living in Sydney and two years ago, I moved to Melbourne,” Mandaliya says. The move was a fortunate stroke of serendipity for the couple.

“When I moved to Melbourne, Rose happened to be the previous tenant of the house I had rented.

“I received letters and mail addressed to her and so I looked for her on Facebook and reached out to her. That’s how we met. We started with coffee, then dinner..” he says adding the rest is history.

Rose hails from Western Sydney and works as a health and wellbeing promotion worker in Melbourne.

Both are die-hard cricket fans. While Dipen roots for the Indian cricket team, Rose has been an avid supporter of the men in green and gold.

“The first time we met, we talked so much about cricket. So I thought it was the right occasion [proposing at India vs Australia game] as we both love cricket,” Mandaliya told SBS Hindi, a day after his iconic proposal went viral across the world.

Rose says they hit it off quickly and cricket played a role.

“We hit it off quite quickly. Cricket bonded us,” she told SBS Hindi

Listen to Dipen and Rose share their love story:

Love is in the air: The couple that got engaged at India vs Australia match share their love story
Embed Download
00:00 00:00

Mandaliya, who hails from Bengaluru in Southern India, says he had planned it weeks in advance and kept it a surprise.

“I didn’t tell our families so it was a surprise for them too.

“I reached out to the Sydney Cricket Ground and told them about my plan to propose during the game and that it would be great to receive their support,” Mandaliya told SBS Hindi.

To his surprise, the Sydney Cricket Ground replied in affirmative.

“They responded positively and they said, we should do it after the 20th over. They told me all cameras will be on me.

“When the match started, I was continuously thinking about how it will go. Never thought it will go viral like this," he said.

Take a look at the moment when Dipen went down on his knee:

Rose accepted the proposal which was broadcast across the world to fans who were watching the second One-Day International between Australia and India on their TV sets live, including their families.

“I was so overwhelmed but in a good way. It was beautiful. I loved the whole thing,” said Rose.

She was later interviewed live at the stadium and inundated with messages.

“Our phones were blowing up with messages. It was funny to see everyone’s [overwhelming] reaction,” she says. After she said Yes.
Supplied by Dipen Mandaliya

The couple is now looking forward to their wedding.

Rose, last year travelled to India to celebrate Diwali with Dipen’s family, is now looking forward to an Indian wedding.

“I went to India for Diwali and was there in December and January. That was beautiful. [India] was amazing. I haven’t been to an Indian wedding but I have heard they are massive,” she says bursting into giggles.

While the couple is now planning on their big day and spending their lives together, they are clear about leading separate paths for one thing. 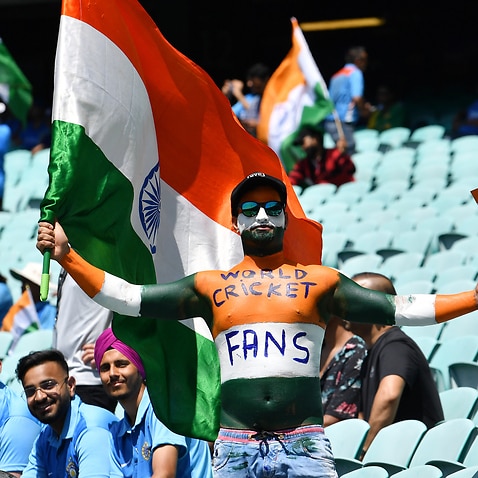 Boos, roars and centuries: Cricket returns with a bang as India take on Australia