When members of Australia’s first all-Afghan surf life saving team first set foot in their new country a few years back, they were all afraid of the water. In March 2021, however, they took home a silver medal at the Victorian championships.

Members of Australia’s first all-Afghan lifesaving team say that when they arrived in their new country, none of them could swim and all were afraid of the water.

“When we came to Australia, I couldn’t swim at all and was very scared of water,” says team member Setara Rezaei, 18.

They were all studying English when Life Saving Victoria’s multicultural project officer and a fellow Afghan Ramzi Hussaini held a session at their school. From that initial lesson, they were hooked and decided to continue attending classes to better their swimming skills.

“When we slowly moved forward, week after week I got more interested in swimming and learned that anyone who lives in Australia should know how to swim, and when you know how to swim, you don’t only help yourself, you save another person’s life and it’s very useful,” Ms Rezaei says.

The team was initially preparing for the 2020 Victorian State Championships, but that competition was cancelled as a result of the pandemic.

They continued to practice and finally competed at the 2021 Surf Life Saving Championships at Lorne on March 14, 2021.

Their efforts paid off when they secured a silver medal in an under-19 competition at the event.

They were one of the two senior Rescue and Resuscitation teams made up of culturally and linguistically diverse people from the Bonbeach club. 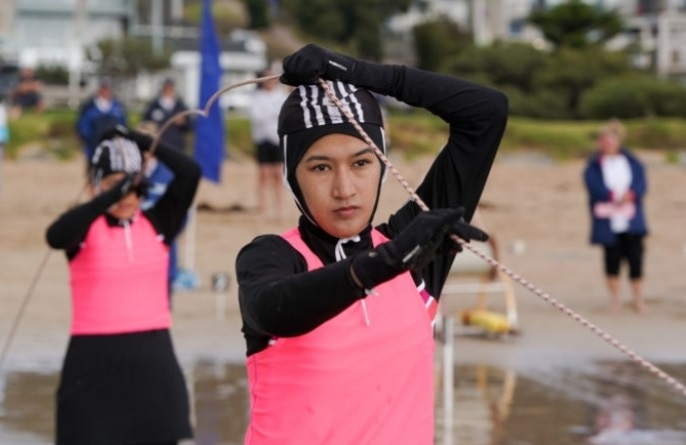 Sana Mosawi, 19, felt "uneasy" walking into the water when she came to Australia.
Supplied/Sana Mosawi

“It was a very proud moment for us. We’ve been working on it since last year,” team member Sana Mosawi says.

Mr Hussaini feels proud that the team overcame a number of challenges to reach this moment.

“They worked very hard, they worked significantly hard… they impressed everyone. I was totally shocked,” he says.

“When they got there, they were a bit nervous because it’s a competition and for the first time they’d gone to a beach that had big waves, and when they started, they looked very interested, they were very impressed and it was a proud moment for them, they were very happy."

Setara and her 16-year-old sister Mahdia Rezaei were both born and raised in an Afghan refugee family living in Iran.

Their father came to Australia as a refugee in 2008 and the family was reunited in 2018. Sisters Setara and Mahdia Rezaei were both scared of water when they arrived in Australia.
Supplied/Setara Rezaei

Tamana Ahmadi, 15, was born in Afghanistan and raised in Pakistan before moving to Australia in 2018.

The year-10 student says she joined the swimming program "straight away" after arriving.

Sana Mosawi, 19, was born and raised in an Afghan family in Pakistan before arriving in Australia in 2017.

Feeling “uneasy” walking into the water at first, she joined the program a year later. Tamana Ahmadi said in the Quetta city of Pakistan, where she grew up, swimming wasn’t a normal activity for girls and women.
Supplied/Tamana Ahmadi

Sahar Ehsani, 17, was born in Afghanistan and grew up in the Pakistani city of Quetta.

Cautious not to “compromise” her Hijab, the year-12 student says she made a “difficult decision” to join the swimming program.

Sabira Jafari, 19, was reunited with her brother in Australia in mid-2018.

Understanding the need to be "safe and keep others safe”, she felt motivated to become a surf life saver.

‘Didn’t want to compromise my Hijab’

The team members all agree that initially, they had concerns relating to cultural sensitivities around being clothed and wearing headscarves while swimming.

But those issues were resolved by Life Saving Victoria, who ordered special burqinis for the team. It was a difficult decision for Sahar Ehsani to become a lifesaver because she didn’t want to "compromise" her hijab.
Supplied/Sahar Ehsani

“I couldn’t swim. When I got here, I wasn’t thinking about swimming at all. After Life Saving Victoria came and introduced us to its program, I got very excited and I didn’t want to compromise my Hijab, so it was a difficult decision for me,” Ms Ehsani says.

It was a similarly difficult decision for Ms Mosawi to make.

“At first, when we just started our swimming lessons, I didn’t want to go, because at the time I had this mindset that, for example, girls don’t swim, or for example, if we did, what would happen to our Hijab?” “But my father supported me and said, ‘you’re living in a place like Australia, you must know how to swim’.”

She now encourages other women from CALD backgrounds to learn swimming.

“They should learn how to swim because in a place like Australia swimming is very necessary as there is water all around us … this something that could save their lives,” she adds.

He says people who were born overseas are five times more likely to drown compared to those born in Australia.

“Because many of them are coming from countries where they haven’t seen water, haven’t seen the sea, they don’t know the risks of the sea. Ramzi Hussaini started off as a volunteer lifesaver and is now working for Life Saving Victoria’s multicultural program.
Supplied/Ramzi Hussaini

“Some people don’t know the season; they don’t know how the weather is.

“Those people sometimes come and think, ‘I’ve swum in a swimming pool, it’s good, I can swim in the sea too’ … that’s why our people are drowning faster.”

He calls on all members of society to abide by the following water safety recommendations: