Immediately after the Great Famine of Bengal in 1943, Richard Casey, an Australian was appointed by the British Government as Governor of Bengal. Associate Professor of South Asian and World History at UNSW, Kama Maclean unfolds the story of the steps taken by Governor Casey to ameliorate the effects of the famine which took the lives of more than three million Indians.

After more than three million died of starvation, malaria and other diseases related to malnutrition during the Bengal famine of 1943, in India, an Australian man, made attempts to ameliorate the effects of famine.

Little is known about Governor Richard Casey, an Australian who served as the Bengal Governor from 1944 to 1946.

“When Richard Casey was appointed, there were massive protests in India. The national newspapers claimed that while the country was trying to gain autonomy, a person was appointed from Australia, which had a White Australia policy, which meant that he can come to India but nobody from India can go to Australia, and he would be paid well in a highly prestigious role,” says Kama Maclean, the Associate Professor of South Asian and World History at the University of New South Wales.

Meet the Australian man who brought in reforms to help Indians after the Bengal famine
Embed Download
00:00 00:00

Governor Casey's governorship appointment was a short, wartime appointment in a province troubled by famine, the threat of invasion, and rising communalism prior to its partition in 1947.

Professor Maclean, who has studied the diaries of Governor Casey and his wife Maie, reveals Governor Casey was appointed at the end of famine when the aftereffects like the diseases related to malnutrition and malaria were widespread in the community.

“Casey tried to do a number of things. He set up rationing and it was directed towards those working in critical districts. Those living in urban areas had some food but those in rural communities didn’t.

“He also set up orphanages, established food supplies, and during that time, when Japan was advancing in Burma, some of the grain was stored away in government storehouses. So that was the tragedy during the famine. There was food but it was stored away. Casey released it, reconditioned the gains and made it available for distribution,” shares Professor Maclean.

“He also started the boat building program. As you know, Bengal diet is heavily inclined towards fish. So he started this program so that people could get food through fish again which they weren’t able to source in 1943.” 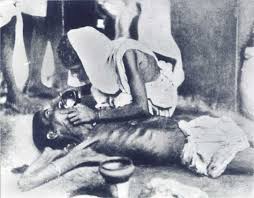 “He was an imperialist. He was there working for the Government of India but he disagreed with a lot of things British were doing in India. He used to write this in his letters to the Viceroy whom he knew since his military days. He wrote to him regularly about the way British were managing in India. He was very critical of the British in India,” Professor Maclean.

“Gandhi actually approached Casey, thinking here is an Australian, I will talk to him and he will be able to create a backchannel and we will be able to restart negotiations again. And the two got along quite well together. They had quite some great conversations,” she says.