How did Hossam Haddad, who comes from Egypt, fall in love with his Australian bride, Erin? And how did Erin overcome all the challenges that could have stood against the success of their relationship?

It features the stories of six couples from different cultural backgrounds, and how they overcame social, religious and cultural challenges, as well as the gap between their parents' expectations and their own dreams.

Those couples are a small example of Australia’s ever-changing multicultural face.

SBS Arabic24 spoke to one such couple: newly-weds Hossam Haddad and Erin Suderlandia, who crowned their love with a wedding on a Melbourne beach.

They delve into how their love blossomed.

Q: Hossam, how did you meet Erin?

Hossam: "Our relationship started through online dating. We messaged and emailed for two weeks, and after that, we decided it’s time to actually meet."

Q: Were you always open to multicultural marriages?

Hossam: "This is my eighth year in Australia.

"When I first arrived in Australia, I thought that when it is time for me to marry, I will go back to Egypt, or I will find an Egyptian girl, but as my stay here grew, my convictions (beliefs) changed with time."

Q: Erin, what did you think of Hossam when you first met him, were you okay with meeting someone who isn’t Australian - and who comes from a completely different cultural background?

Erin: "I thought Hossam was fantastic from the moment I met him and that’s why we continued going out together.

"I never had one idea or another about who I would end up marrying. I don’t think I definitely saw myself marrying an Australian or a non-Australian. I’ve always been open-minded about that sort of thing." As Hossam and Erin got to know each other better, they realised they were more or less on the same page. Despite coming from different countries and cultures, they had some common values and attitudes. This evolved to a stage where Erin "couldn’t imagine" her life without Hossam.

Q: What were some of the obstacles you thought you might face in this relationship?

Hossam: "Naturally, when someone from the Middle East decides to marry a foreigner, the first thing one thinks about is what their parent's reaction will be.

"From the very start of our relationship, around our third or fourth date, I shared with Erin my concerns.

"I told her that I don’t know how my mother and sister, who live in Egypt, will react to me wanting to tie the knot with a girl who isn’t Egyptian, isn’t Middle Eastern, and isn’t a Muslim."

Q: So how did your family react?

Hossam: "Honestly, I was surprised by my family’s reaction and their acceptance of the idea. They welcomed Erin, and respected her as a member of the family."

Q: Erin, what did Hossam tell you about his family? What were you expecting?

Erin: "He talked a lot in the beginning about his family - actually that was one of our main topic of conversation.

"I knew they were Muslims but he also described his family as progressive and open-minded in a way, and perhaps they ended up being even more open-minded than he expected."

“I come from the Middle East, the perception I have of children and religion is that they will follow automatically their father’s religion. However Erin had a different perception."

Q: How did that make you feel?

Erin: "I have to say that of course, I had some fears because I hadn’t met them yet, I didn’t know them personally, so I had to trust that they were as progressive as he told me they were."

Q: Did you prepare in any way to meeting Hossam’s family?

Erin: “I definitely prepared in terms of knowing as much as I could about them personally, I also read a little bit about Islam and educated myself and learned about Islam as a faith."

Q: What about you Hossam, what steps did you take before meeting Erin's parents?

Hossam: "I think here (in Australia) this subject is easier than there (Arab world).

"Since Erin’s family is Australian and Australia is a multicultural country - and multi-faith, this didn’t make me feel worried - or as worried in comparison to Erin’s worrying about meeting my family.

"I also tried to learn as much as I can about Erin’s family.”

Q: Did you lay down any rules for the relationship to ensure its continuity?

Hossan: "We were both in the same mindset, we both wanted to get married, so we both knew that the biggest obstacle we would face and we will need to discuss at early stages, was the children.

“I come from the Middle East, the perception I have of children and religion is that they will follow automatically their father’s religion.

“However Erin had a different perception and with her, all topics are subject to discussion and that there should be equality between the mother and the father in the aspect of religion.” Hossam and Erin in Egypt
H&E

Q: So how did you resolve this?

"We eventually agreed that the best for our children will be to learn both religions (Islam and Baha'i) and that we teach them respect and acceptance of both religions.

"And what helped us reach this solution is that both these religions share a lot of common values.

She explained how Hossam used to travel hours to reach her as she lived away from the city. But Hossam said that if she thinks that he has put the effort in by driving, then she had put effort in many other ways by learning Arabic.

He says she has been learning it for two years and she also decided that she wanted to go to Egypt, so she went and lived in Cairo for six months to learn more about culture and family.

Q: Erin how did you feel about visiting Egypt and learning Arabic?

Erin: “I absolutely loved my time in Egypt. I loved the culture.

"The language is super difficult for me. I’m a long way from really understanding and speaking it fluently.

"But I love the culture, the nightlife, the life on the streets in Cairo was amazing.

"The importance of family is something that I really appreciate, that is perhaps a little lacking in Australia, in comparison to the Middle Eastern culture. There is so much that I loved about Egypt that I would bring into my life in Australia.

"I am lucky to have Hossam and his Egyptian friends, who are like family to him, and that I get to experience that Egyptian culture in Australia."

Q: Hossam how did you feel after meeting Erin’s family?

Hossam: "Erin’s family were very welcoming and accepting of our relationship, they accepted me as part of their family and they didn’t make me feel pressured or worried."

We also asked Hossam if any of his friends had different views. He says a few told him not to go into this relationship and to try and find someone of the same religion and background.

But he says he knew they would change their minds once they met Erin, and that was in fact what happened. 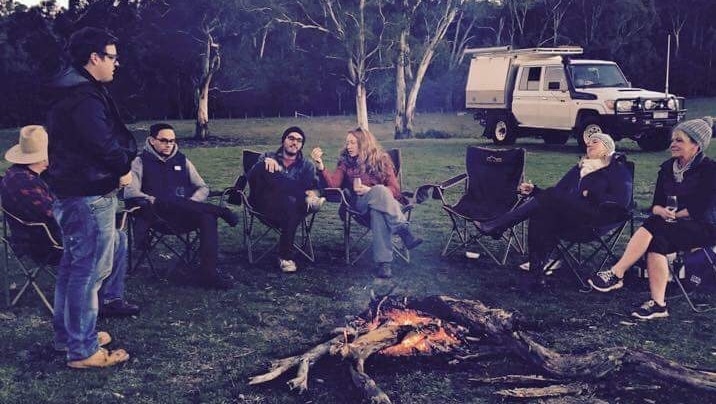 Erin and Hossam with family and friends
H&E

Q: What advice can you give to couples from different cultures?

Hossam: "Keep an open mind. Have an open approach to people from different cultures.

"There is always middle ground to be reached and the key to that is communication."

Erin agreed, adding "I think accepting differences between you because of the cultural backgrounds and respecting that some things are different and coming to an understanding that there is nothing wrong with some differences, as long as fundamentally you have the same values and have the same ideas about how you want to raise your family and how you value time together and how you spend money… all these things are really important in a relationship.

"If you can figure out these things, then you can respect each other’s differences."

Listen to Erin and Hossam’s story in Arabic and English in the audio link at the top of the page.

Marry Me, Marry My Family is the familiar story of multicultural Australians, as they are today - trying to embrace their Australian identity, whilst staying true to their culture, identity, and family. It's a heartwarming update on how multiculturalism is working in Australia and a colourful account of the country that we are evolving into.

Marry Me, Marry My Family is streaming now on SBS On Demand.