"Spoja lorda", the home-made filled pasta made by Emilia-Romagna's nonnas

This traditional egg pasta from the northern Italian region originates from the cuts of the pasta sheet when making ravioli. Chef Gabriele Olivieri advises on how to prepare it with a rabbit, broad beans and wine sauce.

It is known that once upon a time food wasn’t wasted by Italian grandmothers. Every ingredient and every cut were used entirely in the preparation of their recipes.

That's exactly how the “spoja lorda” – which in the Romagna dialect means "dirty pasta sheet" – was born. Romagna-style sushi, the recipe born after a 1-year experience in Australia

Once when you made the stuffed pasta and dirty the pastry with the filling, instead of throwing away the scraps, since nothing was thrown away, those little pieces of dirty pastry were cooked in the broth.

This is how Gabriele Olivieri, chef at the Pentolina restaurant in Melbourne's CBD, described the filled pasta dish that his grandmother used to prepare for him.

“On Sundays, we were always at lunch with the family and, if on Saturday the grandmother prepared the ravioli, on Sunday we probably ate the spoja lorda”, he told SBS Italian.

Traditionally served in chicken broth and filled with squacquerone and ricotta cheeses, Gabriele serves it with a rabbit, broad beans and white wine sauce.

Here's how to prepare it.

Prepare the dough by placing the flour on a wooden cutting board, forming a "fountain" and a hole in the centre in which we will put the rest of the ingredients.

Knead until the mass is smooth and homogeneous, and let it rest for about 40 minutes.

Then prepare the rabbit. Cut the rear and front legs from the central body, then split the latter in 4 parts of the same size (to facilitate cooking).

In a saucepan, put garlic, bay leaf and herbs with a little oil. Fry for a few minutes, then add the rabbit pieces. Season with salt and pepper and brown on both sides for about four minutes each.

Add the wine, broth and cover with the lid. Cook over low heat for about 40/50 minutes.

Let's now prepare the filling for the pasta. In a blender or food processor, mix all the ingredients together for 5 minutes, until you get a thick cream. Leave to rest at room temperature.

Roll out the dough with the help of a dough roller or with a rolling pin and stretch it out until the thickness is approximately 2mm.

Put a pot of water on the stove to cook the pasta.

After 50 minutes, check the rabbit. Once cooked, divide the meat from the bones. Cut the meat into small pieces and add them to the previously filtered cooking liquid with a strainer. Then pour the sauce into a saucepan and add the previously blanched broad beans.

When the water for the pasta boils, add salt and cook the pasta for about a minute, until the pasta comes to the surface.

Drain the pasta and pour it into the rabbit and broad bean sauce. Add a little extra virgin olive oil, Parmesan cheese and mix.

Listen to the podcast of the recipe (only available in Italian): 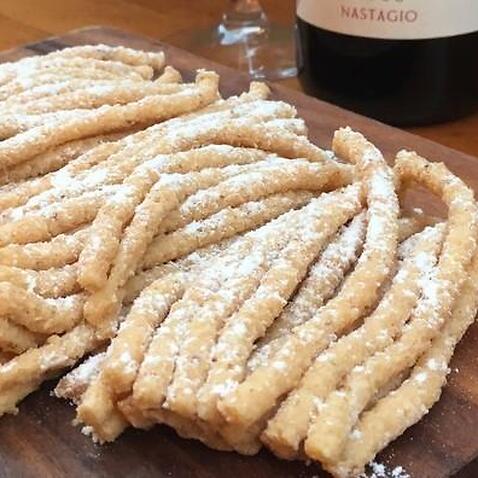 The reciepe for swordfish "passatelli"