Residents of Jordan Springs in Western Sydney have expressed concerns after some media reports labelled the area as a ‘sinking suburb’.

Satinder Pal Singh, a resident of Jordan Springs near Penrith, moved to his newly built house in early 2019.

Mr Singh lives at about * kilometres away from the street that has been ‘severely’ affected by the recent ground settlement issues.

Mr Singh said that although his property is not affected by this problem, he is concerned that it would adversely affect the overall property prices and insurance costs in the area.

“The problem is localised in the one part of the area but it has drastically affected the reputation of the entire suburb,” he said in an interview with SBS Punjabi.

“There are only a few properties that have seen considerable damage. We have around 2,000 properties in this suburb and we find it very inappropriate for the media to label the whole area as a sinking suburb.” 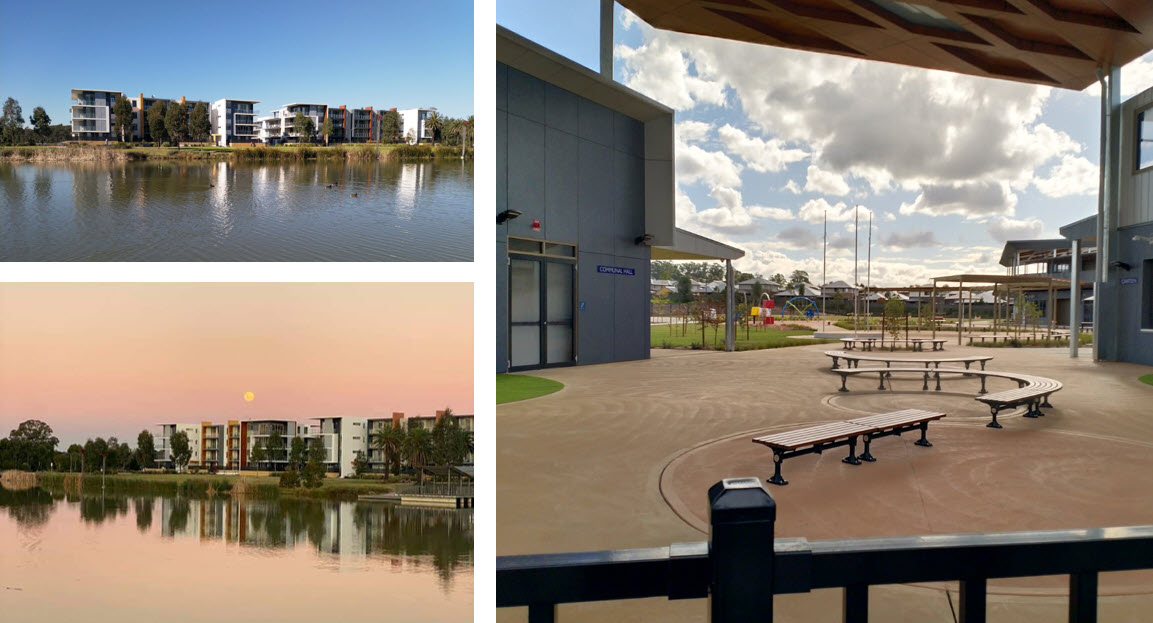 A view of Jordan Springs, which is a new development in Llandilo, near Penrith in Sydney's west.
Supplied

Mr Singh said he also wants the Council** to disclose their basis for sending warning notations to around 900 properties across the area.

“I don’t know why they’ve sent it to everyone. I don’t see any problems in my house, nor in my immediate neighbourhood. Our houses are raised on a high-grade H1 slab that fulfils all the safety recommendations,” he added.

“We feel we are caught up in a tussle between the council and property developer. I urge them not to indulge in a blame game, rather find a solution to the problem.” 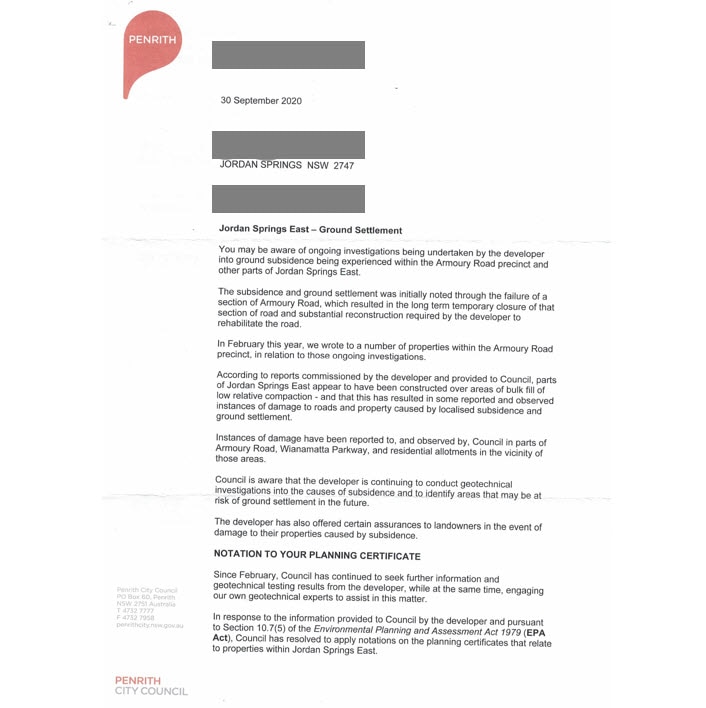 Penrith City Council sent this notice to a large number of properties in Jordan Springs in NSW.
Supplied by Mr Singh.

Meanwhile, the property developers Lendlease has claimed that the issue is ‘localised’ and does not extend to the whole of Jordan Springs East.

“Our investigations and expert advice have determined that the excessive ground settlement issue is an isolated, localised issue, impacting around 90 houses in the Armoury Road area, rather than a precinct-wide issue. We’re not aware of excessive settlement issues in any house outside of the impacted area,” said Kevin Montier, Senior Development Manager, Lendlease in a written statement to SBS Punjabi.

The developer has also offered certain assurances to landowners in the event of damage of their properties caused by subsidence.

“To support our customers directly impacted by the excessive ground settlement issue, we have established a compensation scheme with the Commissioner of Fair Trading and many of our customers are currently accessing that scheme,” said Mr Montier.

“We’ve made a commitment to Penrith City Council to repair any of the precinct’s public assets impacted by excessive ground settlement issues. This offer includes local roads and footpaths and we’ll work with the Council to make sure these repairs are completed to their satisfaction. The property developer Lendlease sent this letter to Mr Singh and other residents in this area.
Supplied

Lendlease also took notice on the Penrith City Council who have reportedly placed a notation on the planning certificates of around 900 properties.

“We’re urging Council to provide clarity to customers around the removal of the notation from properties which are not impacted, and we remain committed to working with Council for the benefit of our customers,” said Mr Montier.

“We know how important our customers’ homes and community are, and we are very sorry for the stress and anxiety this issue is causing residents. Everything we are doing is first and foremost to support them.”

Two other Jordan Springs-based residents, who want to be known by their surnames Mr Singh and Mr Verma only, have also expressed concerns over the matter.

“We don’t want to see this area going down in the history books just because of some media reporting and a friction between the council and the developers,” said Mr Singh.

“We invested our hard-earned money into these properties…. and we can’t simply sit and watch to see the real estate market collapse for a reason that is not completely true for the whole area.” Mr Singh said he is aware of at least two occasions where the property deals were adversely affected owing to the current situation.

“Buyers don’t want to go into the details. It is all from the news reports that mention we are living on a sinking piece of land, which we found misleading, unfair and not completely true,” he said.

Earlier, media reports had raised concerns after many properties in the area suffered sunken driveways, cracked brickwork and damaged roads.

It is alleged that the locality was developed on insufficiently compacted landfill, causing some parts of it to sink.

* Mr Singh doesn't want to share the exact locality of his residence.

** SBS Punjabi has contacted the Penrith City Council for a comment.