Coming Up Wed 8:00 AM  AEDT
Coming Up Live in
Live
Italian radio
More

The Cousin Quartet triumphs in the inaugural Strike a Chord competition

The Cousin Quartet were announced as the inaugural winners of Musica Viva’s Strike A Chord, the first National Chamber Music Championship for secondary school ensembles. Performing live from the City Recital Hall in Sydney, New South Wales the group claimed the Robert Salzer Prize, worth $5, 000.

The Strike A Chord competition was developed by Musica Viva Australia as a new annual initiative for its 75th anniversary in 2020, with support from Creative Victoria and presented in partnership with Melbourne Recital Centre and the Australian National Academy of Music (ANAM). A visionary gift from Gandel Philanthropy also helped to underpin this unique and important event. Thanks to the partnership of Melbourne Digital Concert Hall, the competition was able to move to an online format, successfully navigating complications arising due to the COVID19 pandemic. Wherever it was possible, the groups performed live on Saturday, from cities all over Australia. For those groups unable to do so because of lockdown restrictions, a broadcast of their first-round performance was livestreamed. Strike A Chord Final, Winners, Cousin Quartet.
The Cousin Quartet is made up of four cousins: Beatrice and Dylan Colombis and Hanna and Jamie Wallace, all coming from musical families.

The lead violin, Beatrice Colombis, is an experienced musician who has already performed in Italy, Japan, UK, the Baltic Republics and Island. Having just completed her HSC, Beatrice dreams of becoming a professional performer and is now trying to enter Sydney's Conservatorium of Music.

Dylan is 12 years old and has followed his older sister in studying the violin. Hanna (15) has chosen to study the Viola "as too many students go for the violin", while Jamie (13) has fallen in love with the cello. They were encouraged to get together and form the Cousin Quartet by their parents. 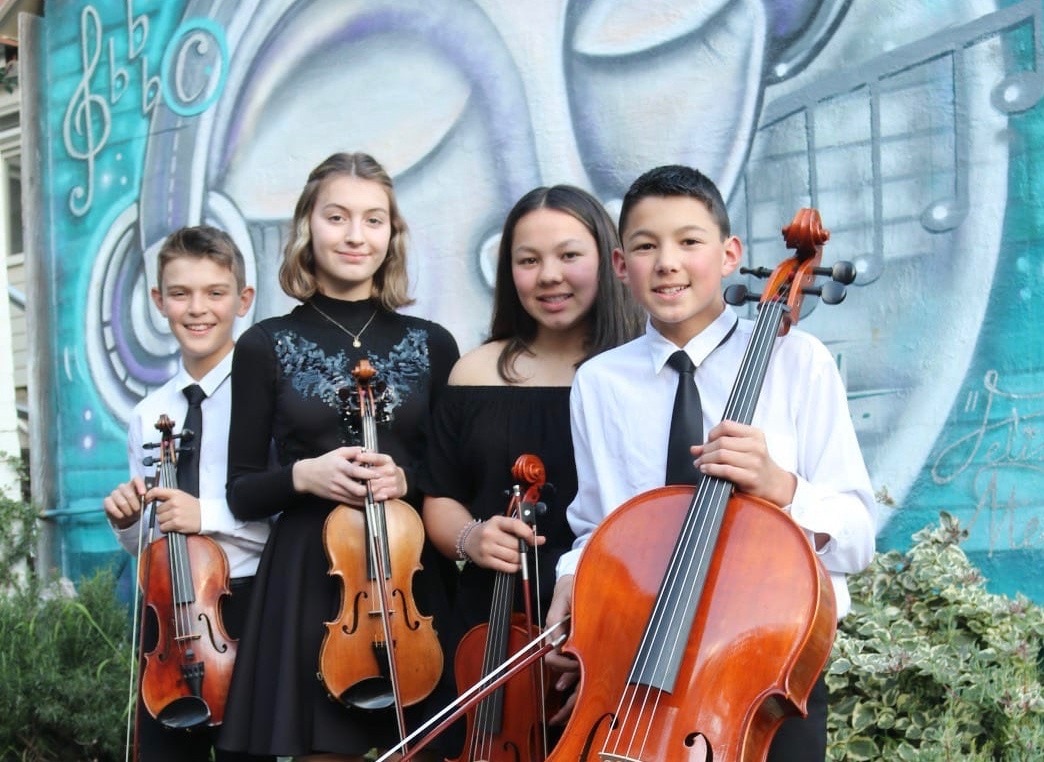 The Cousin Quartet. From left: Dylan and Beatrice Colombis, and Hanna and Jamie Wallace.
Photo by Masaki Nakamura