'The Indian Himalayas – Through My Eyes’ - a PEACE project

An unique exhibition, “ The Indian Himalayas – Through My Eyes’ held in Sydney, gave opportunity to the students of a school situated at Shey, Ladakh India to participate in the completion and express their creative excellence.

In association with the Union Bank of India Sydney, the exhibition The Indian Himalayas Through My Eyes’  show cased the art work of students and a few of students also had the opportunity to come to Sydney .

As part of this project, an art competition was conducted on the theme ‘The Indian Himalayas- Through My Eyes’ for the students of the school.  A total of 23 submissions were received.

The Indian Himalayan Region (IHR) is the section of the Himalayas within India, spanning the states of Arunachal Pradesh, Himachal Pradesh, Jammu & Kashmir, Manipur, Meghalaya, Mizoram, Nagaland, Sikkim, Tripura, Uttaranchal as well as the hilly regions of Assam and West Bengal. The Himalayan region has a very significant role in the mountain ecosystems of the world- not only from the standpoint of climate, as a provider of life giving water to a large part of the Indian sub-continent, but also harbouring a rich variety of flora, fauna, human communities and cultural diversity.

Along with showcasing the creative excellence of the students, this project PEACE - The Indian Himalayas Through My Eyes’  also gave opportunity to promote tourism.​ People discovered the unique landscape and untouched beauty of Ladakh, India

Speaking with SBS Hindi, Jayantee Mukherjee Saha the director Aei4eiA said, “This invitation only Art exhibition was well attended by senior diplomats, Government officials, business leaders as well as members of media representing both Australia and India. “Everything about the exhibition is unique”, “refreshing”, “rejuvenating” were the most common responses received.

Ms. Jayantee said, "It was our honour to have The Hon. Philip Ruddock (Former Minister for Immigration and Multicultural Affairs, Former Attorney General of Australia, Mayor of Hornsby Shire Council and the second longest-serving parliamentarian in the history of the Australian Parliament) amongst us.” She also  added, “We are thankful to Mr. B Vanlalvawna, Consul General of India in Sydney for gracing the occasion and his kind words of encouragement.

Ms. Jayantee told that all the judges shared the comments like - "Excellent efforts by all. It's difficult to judge. Overall, marvellous experience. I salute all"

The Union Bank of India Sydney branch also announced AUD 500/- towards the development of the School and cash prizes for the winners. 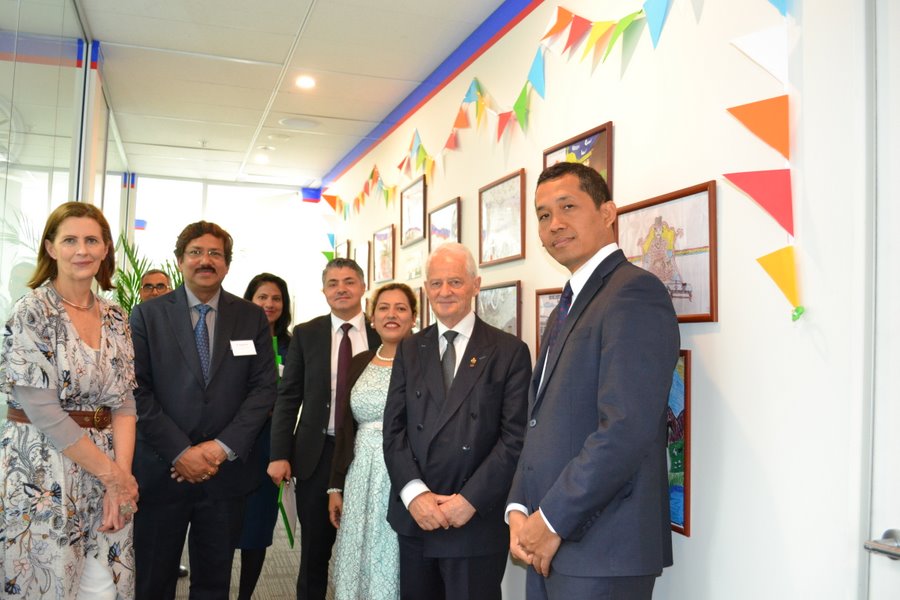