The recipes of the Giro d’Italia, a menu typical in today’s stage

While the cycling race of the Bel Paese crosses the Abruzzo region, the chef of the Giro D'Italia restaurant brings to the table two typical Abruzzo dishes; a bruschetta and cavatelli pasta.

Today the Giro d'Italia will pass through the 10th stage of the cycling tour, crossing the Abruzzo region.

While cyclists travel the 177km that go from Lanciano to Tortoreto, we will be able to taste the traditional dishes of these places also in Australia. How? 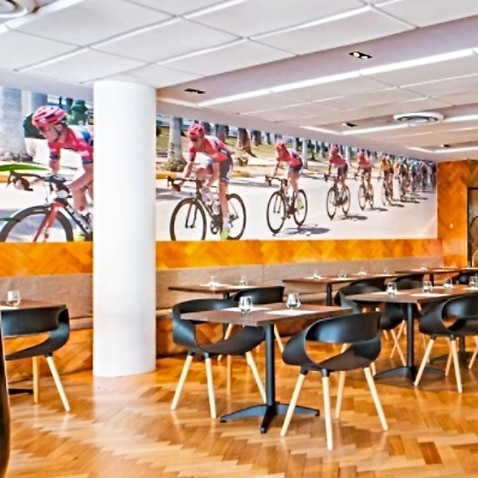 Take-away the Giro D’Italia from a Melbourne's restaurant

Domenico De Marco, chef and owner of the Giro d'Italia restaurant in Melbourne, brings to the table a menu dedicated to the traditional cuisine of Abruzzo: a bruschetta with broad beans and pecorino cheese, followed by cavatelli with lamb sauce.

Quote: "Think how nice it is, tonight you can watch the Abruzzo stage while you eat cavatelli!"

Here's how to prepare the typical menu of the stage:

Bruschetta with broad beans and pecorino Cut the bread into slices and toast. Then rub the garlic on the slices to flavour.

Boil the water, add salt and cook the broad beans. Once cooked, dip in water and ice to cool.

Shell the beans and flavour with mint, lemon peel, oil, salt and pepper.

Place the broad beans onto the bread and garnish with pecorino cheese flakes. Fry celery, carrot and onion in a pan with a little oil. Add the lamb without removing the bone and let it brown.

Deglaze with the red wine, then add the tomato sauce and season with salt and pepper. Cook for at least three hours over low heat.

When the sauce is ready, let it cool slightly. Remove the bones and add the thyme.

Cook the cavatelli in salted water for about 12-13 minutes. Drain and mix with the lamb sauce. Garnish with a little parsley and season with pecorino and parmesan cheeses.

Pair the bruschetta with a white wine (Trebbiano d’Abruzzo) and the cavatelli with a red wine (Montepulciano d’Abruzzo.

Always use the wine we are going to drink for cooking; it’s better than using cooking wine

Listen to the podcast of the recipe as it was told by the chef to SBS Italian (only available in Italian):