The frustration is brewing among the overseas Indian citizens as they struggle to convert their old currency while standing in long RBI queues. SBS Punjabi' Preetinder Singh Grewal 's reports...

Two Indian-Australians who are currently visiting India feel that they have been caught in the transition phase of demonetization.

Sydney’s Rajwant Singh and Dr Surinder Singh are currently is India to spend some quality time with their relatives and loved ones.

Both of them feel that the demonetization and the process of currency exchange by RBI looks good on paper, but it's a different story on ground.

“The situation is still far from ‘normal’. There are still long queues at ATMs and Banks in Punjab. I have visited Ludhiana, Amritsar, Moga recently, and i'd to face similar cash crisis,” said Rajwant Singh a restaurant owner from Sydney.

“It’s a difficult situation for everyone including the NRIs who visit India in winter.”

“The effect can be seen on day today life with markets still struggling to cope with losses. And it is as bad for the farmers.” Dr Surinder Singh, a Vet from Sydney had a hard time exchanging his debunked currency at Reserve Bank of India’s New Delhi branch.

“The process is very poorly managed by Reserve Bank of India. I had to stand in a long queue of app 300 people with no one one knowing what's happening inside with the officials.”

“And it’s only for people having Indian passports. There is no support for foreign nationals.”

“I have seen few foreigners complaining that currency exchanged for $70 per week is just not enough. But who cares!”

“It is all chaotic as tempers run high outside the RBI’s New Delhi branch; NRI's trying their luck to exchange debunked currency in long queues.”

“Is that time and effort worth for AUD $500,” asks Surinder Singh from Sydney who visited RBI’s New Delhi Branch last week.

The government of India demonetised 500 and 1,000 rupee notes from November 8 midnight.

On the other side, the government maintains that there is no shortage of cash and there is enough stock of currency notes with the Reserve Bank of India.

According to a Deccan Herald report, as only 5 RBI offices -- in Mumbai, New Delhi, Chennai, Kolkata, and Nagpur -- are authorised to exchange the currency, people have to travel long distances.

While there is no limit on deposit of SBNs by an Indian national who was abroad when the 50-day window was in operation, NRIs can deposit only up to Rs 25,000.

Indians abroad will have to produce a "copy of passport with immigration stamp as proof of the individual's absence from the country during the period November 9, 2016, to December 30, 2016" as also copies of all bank account statements evidencing that no SBNs of 500 and 1,000 rupees were deposited during the 50-day window. 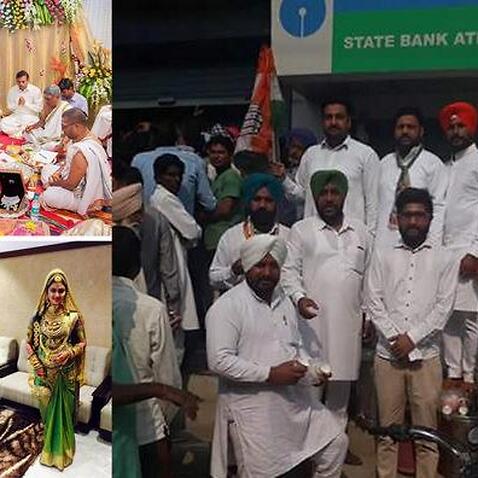 What is wrong with the BIG FAT 500 crore wedding!! 'Please be patient' as the currency change gets underway: Indian High Commissioner