‘West of Sunshine’ is the debut film of Greek Australian writer, director and producer Jason Raftopoulos. The 78 minutes feature film was screened in last year’s Venice Film Festival and was greeted with a five-minute standing ovation. Jason Raftopoulos talks to SBS Greek.

Tell us about your family’s journey from Greece to Australia

'My father is from Ithaca and my mum's side is from Cyprus. It was my great-grandfather that first came to Australia with the gold rush, he worked and then went back to his Ithaca. This is where he bought his first properties and eventually settled.  Then he came back with my grandfather where he lived the rest of his life.

Just before World War Two, they went back to Greece. When he decided to return to Australia the authorities wouldn't let my grandfather return because "he was too old at the time". They needed young people to come and help "build" Australia. So, my dad got on a boat, sailed for a month and came as a very young teenager. It’s the classic migrant story.'

The idea for the film's scenario is based on your award winning 2011 short film ‘Father's Day’. Could you please tell us a few words about the storyline of ‘West of sunshine’?

'The story was born in 2010 - 2011 when I directed and produced the film ‘Father's Day’. I was exploring the father-son relationships, kind of mythological stories that repeat. In a sense, this idea was born there where are a man needed to pay back a debt to a loan ‘shark’ by the end of the day but he had to look after his young son who's was on school holidays'

Jim, the protagonist, is caught in a vicious cycle of gambling and debt. He must choose between his past and a second chance in life. Do you think that our life is a matter of correct or wrong choices or are there other social, political or other factors that influence our lives?

'I did a lot of research on gambling addiction and of all kinds of addiction. Ultimately, addiction is a symptom of some greater pain or some greater problem. In a way, finding insight into this exact pain is really the story of the film. In a society, we live under all these kinds of pressures and structures and that kind of add to the stresses that people make when they are choosing to either gamble or to excessively use substances or anything else that is addictive.

It’s a personal choice that the protagonist has to make; to either live in a fantasy which is gambling and basically pain management or chooses to live in the present moment and try and be someone that's present and understands about love that didn't understand before and to be a father to his son.'

How important is this film to you, personally?

'It’s important for a lot of reasons. Directing and producing a film is a miracle itself; From conceiving an idea for a film and for the film to resonate with people out there. This is where the success is"

In your film, there are elements of the post World War Two, Italian neorealism films. Do you find any similarities in today’s society with the one that was formed just after WWII?

'What I really wanted to do was to create a documentary-style film and to capture the essence of the people who lived back then. I wanted to do this as authentic as possible using non-actors and actors and the city as a character.

So, when you look into film history, the people that first started to do that were the Italians and the Neorealists. I love that time in the cinema so much because it's so vibrant and exciting. The sets of the film are on the streets with real people. I just think that's both challenging and exciting and that's what I wanted to try and capture.' 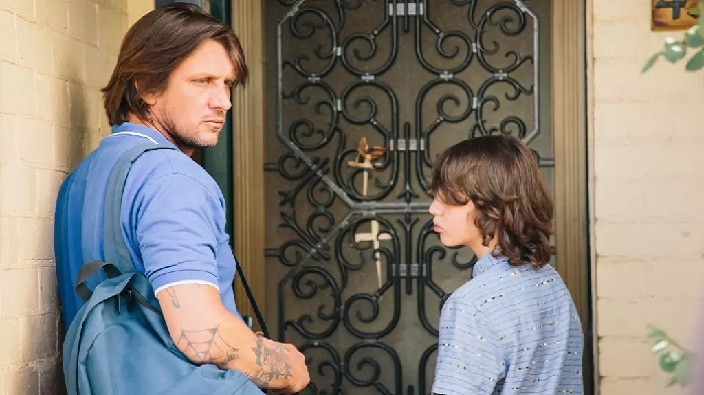 Damian Hill as Jim (L) and the young Ty Perham as Alex.
Supplied

How do you prefer to deliver your message through your film?

'I definitely turn to less is more. So my natural inclination is to let the audience work and that doesn't mean that everything is wrapped up in a bow. You can still have an upbeat ending film whereas all the questions are answered but I'm treating my audience with respect and knowing that there's so much smarter than we potentially give them credit for. I feel like giving them questions to think about after the film.'

Are there any Greek directors that you know and you follow their work?

'I think Greece produces some of the most incredible directors of late. And just going back in time, Theo Angelopoulos and ‘Ulysses’s Gaze’and Costa-Gavra ‘Z’. I remember seeing those films and they really moving, there are incredible films. And they just stayed with me.

They are political films and in a sense, politics and I will cross over every time because they will have a strong point of view. There is some kind of element where those societal and political views cross. More young directors are coming out now due to the Greek crisis, i.e Yannis Economides’s film ‘Stratos’, Yorgos Lanthimos ‘Dogtooth’, Giorgos Georgopoulos’s ‘Tungsten’, Athina Rachel Tsangari’s ‘Attenberg’. Almost dystopian like, in a world that they create. It kind of speaks to the psychology of the nation as well.'

Are you working on any new projects?

'I'm working diligently on a screenplay which is a totally different project. It's more of a thriller sited in a very exotic world, but when you break it all down, some of the things are still quite simple. So it's a psychological thriller in a kind of a mysterious exotic world.' 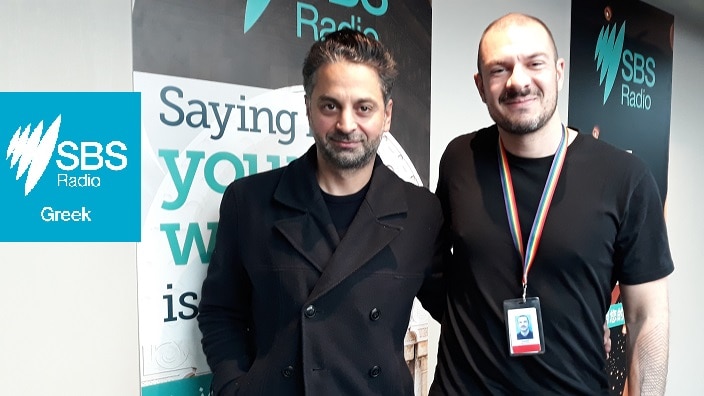