Ahead of their participation in their first-ever Asian Blind Football Championships next year, Australia's Blind Football team has toured India in a friendly series of matches to gain exposure of playing at an international level.

Australia’s Blind Football team (B1) has just completed a tour of India to develop and strengthen the football culture amongst the visually impaired of both the countries.

During their tour, from 17th- 23rd September 2018, the national side consisting of vision impaired players played two matches against India and took part in joint training sessions with the Indian Blind Football team.

It was the first international tournament for the Australian team which is preparing to compete in their first Asian Blind Football (B1) Championship next year. During the two-match series, the Australian team showed a fighting spirit and gave tough competition to the Indian side, but in the end they lost to the host in both of the games - with a  final scoreline of 2-0 and 5-0 respectively.

After the friendly series, the team participated in a joint training session with the Indian team focussing on fitness, conditioning and skill improvement.

The Australian Blind Football Coordinator, Dave Connolly, told SBS Gujarati: "The purpose of India tour was to provide an international competitive opportunity for the team. It was the first international tournament and players got significant exposure from the tour."

Australia made their international blind football debut against India in Kochi last week, and Shae Skinner made history as the first woman to play for the Australia Blind Football National Team. Congratulations to Shae and the Australian National Team! #BlindFootball 🇦🇺⚽ pic.twitter.com/joLVUViiou

The inaugural Australian Blind Football team consists of players from Victoria and Queensland:

Blind Football Australia's national program is only a year old but it's looking to take part in more competitions in 2019.

"We are looking to increase our national camps to 4 in 2019, which will prepare the team for their first appearance at the IBSA Asian Blind Football (B1) Championships which will provide us with an opportunity to qualify for the 2020 Paralympics in Tokyo," said Dave Connolly.

Give it up for @Blindfootie for winning the two-match series against Australia. The team scored seven goals and didn't concede a goal in both games.

A small ground for blind football

Blind Football is an internationally recognized sport played at the Paralympics. The game is played on a smaller ground compared to a normal football pitch. Generally, the ground size for the blind football is 40 metre by 20 metresh with side kickboards and an audible ball. 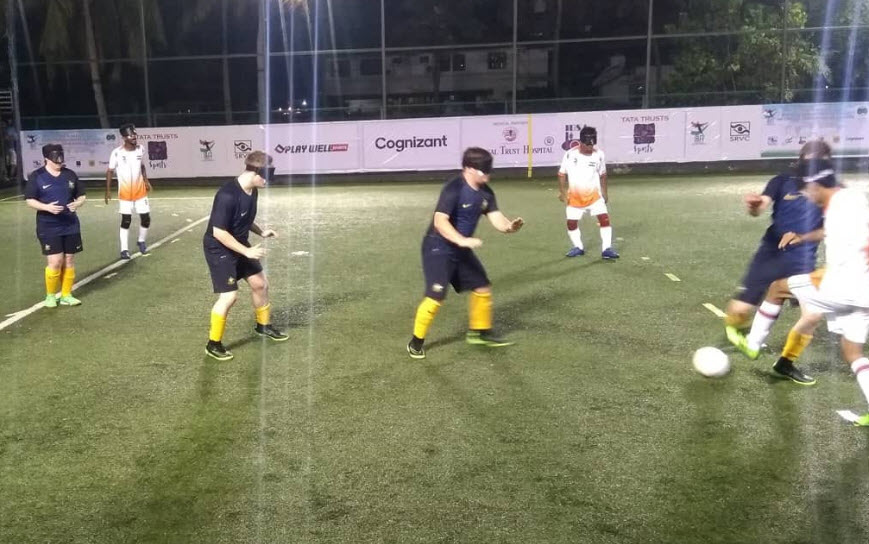 Indian and Australian players are in action during a match.
Blind Football India

A size 3 audible ball with low bounce is used for the game. The players have to depend on the sound emitted from the ball. They also receive instructions from other players as well as coach, a shooting assistant behind the opponent’s goalpost guides them to kick the ball towards the goalpost.

The team now heads to the Malaysian capital, Kuala Lumpur for another series of friendly games and training.