The statue was brought to Australia by an artefacts collector during the 1970s.

A 2,000-year-old statue of Buddha has been returned to the government of Pakistan at an event at the High Commission for Pakistan in Canberra.

Australian citizen Romy Dingle said her family had the Buddha statue since she was a child.

“I am delighted to facilitate and return the piece of history as it has now been returned to its rightful place to be celebrated and protected in a befitting manner.

“Today’s event is an excellent example of the results that can come with close cooperation between individuals from civil society and government institution to preserve and celebrate art,” she said. 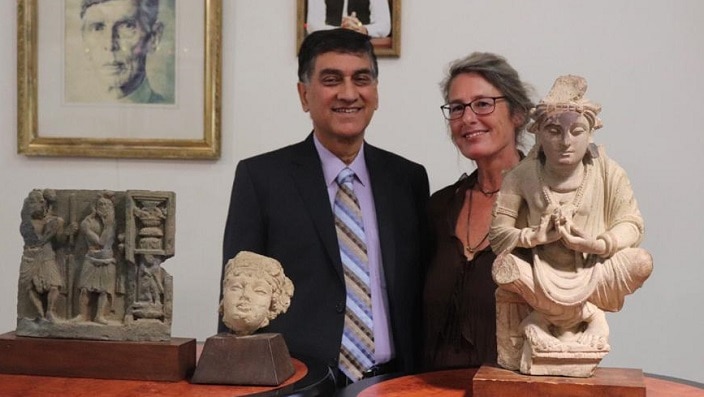 Pakistan’s High Commissioner in Australia, Babar Amin thanked the family and said that the statue was an important element of the cultural history of Pakistan.

“I hope the people understood its value as it is one part of Pakistan’s history which also belonged to the entire world.”

“Gandhara was an ancient kingdom in the modern-day North of Pakistan spreading from Peshawar to the Swat valley, and Pothohar plateau region of Pakistan.” The cultural and linguistic region of Gandhara, which was located in modern-day northern Pakistan and parts of eastern Afghanistan, lasted from the early 1st millennium BC to the around 11th century AD.

Chair of the Department of Indian Subcontinent Studies, at the University of Sydney, Dr Mark Allon is currently researching the recent discoveries of ancient Buddhist manuscripts from Afghanistan and Pakistan.

According to Dr Allon, there has been a huge market of Gandharan art from the Afghanistan and Pakistan region since the discovery by British of the Buddhist heritage of that area.

“It was fueled to a large extent by the fact that the art of that region was sort of a melding of both classical Greek/Roman forms, Indian forms and some central Asian influences.

"So the European collectors were intrigued by this 'greekness' in the South Asian Buddhist imagery." Buddha statue and other artefacts being returned to Pakistan.
Supplied

“The statue and other artefacts [being returned to Pakistan] seem to be from the Kushan Empire which stretched from the area which is now India, Northern Pakistan, Afghanistan and Central Asia.

“People travelled for trade throughout South Asia during that time. There were artisans, tradesmen and agriculturists and warriors forming the gamut of North and South Asia.

“The Gandharan region saw many invaders and rulers who occupied the area, the first recorded being the Persian Empire, which was followed by the Greeks, Mauryans, and Kushans, who were a nomadic central Asian tribe” Dr Allon said.