The India Club celebrated Diwali on 7th October with the usual panache. The surprise for the elegant evening was a Bollywood style dance performed by Julian Leeser Federal MP for Berowra.

Australian federal MP Julian Leeser surprised the crowd with his moves at a recent Diwali function in Sydney. It was sight to behold when the Federal MP for Berowra, Leeser was cheered by the audience.

MP Leeser was taught these dance moves by an Indian dance teacher, Monalisa Grover who also works as a primary school teacher in Sydney.

The Diwali event was organised by the India Club in Sydney on 7th October.

Every year, the India Club presents an almagation of performances ranging from Indian to Middle Eastern to South American cultural performances.

While they had the usual delightful dining, networking and other entertainment, the  the biggest surprise for every one including the dance team was when Julian Leeser – the Federal Member for Berowra stood up from his seat on the song “Dil Kaa Maamla Hai Dilbar” and came dancing on the floor and delighted the attendees with his amazing performance.

The audience stood up with a big roar of appreciation and cheered Julian for his performance.

The event was attended by an array of politicians representing both sides. The Hon. Ray Williams MP, Minister for Multiculturalism and Minister for Disability Services represented the Premiere of NSW. The Consul General of India in Sydney Mr Vanlalvawna & Dr. Mrs Rosy L. Khuma,  The Hon. David Elliott Minister For Counter Terrorism, Minister for Corrections and Minister for Veterans Affairs, The Hon. David Clarke MLC Parliamentary Secretary for Justice and Mrs. Marisa Clarke were among the special guests.

On the occasion, Minister Ray Williams announced the “Illumination of the Opera House” again this year and mentioned that it started with Shubha’s efforts. 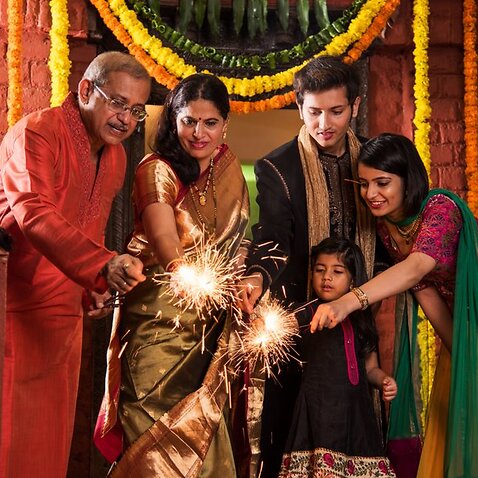 Celebrate Diwali with SBS Hindi and win a $200 voucher!