Small and medium businesses and middle class workers are tipped to be winners in the tight 2016 budget.

The winners in the 2016 budget will be small and medium businesses and middle class workers earning more than $80,000, media reports suggest.

On Saturday, The Australian reported the budget will contain tax cuts for middle class workers on $80,000 due to take effect on July 1, the day before the election is held.

Treasurer Scott Morrison said small and medium businesses will be the biggest budget winners, telling the Australian Financial Review they are the "hope of the side" as the economy transitions following the mining boom. Australians are likely to learn more about the budget on Monday, with Mr Morrison stating he wants budget details released before he presents it on Tuesday so he can take a wider focus in his speech.

Senior government ministers, including deputy Liberal leader Julie Bishop and Industry Minister Christopher Pyne, didn't confirm the reports of tax cuts, but Mr Pyne said if they are in the budget he would like to see them rolled out quickly.

"Obviously we want the tax cuts to start earlier rather than later should they be confirmed in the budget, because we want middle class earners not to be moving into higher tax brackets," Mr Pyne said on Sky TV. 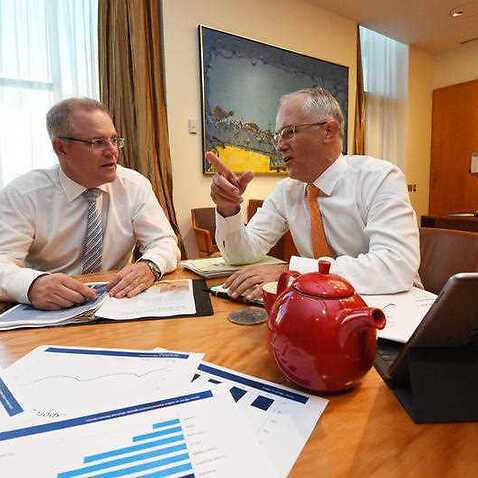 Opposition Leader Bill Shorten was scathing of the cuts, arguing they amount to Prime Minister Malcolm Turnbull splashing cash around to set himself up for the election.

"His government has been picking the pockets of Australians every day for three years, now at the last minute, the day before an election, hopes to throw a few dollars so everything will be forgotten and forgiven," Mr Shorten told reporters.