Harjit Kaur’s son found her body at her Glenwood home and NSW Police have charged her husband, Jagdish Singh, with murder.

The Blacktown community is organizing a candlelight vigil will in memory of murdered Indian woman - Harjit Kaur.

Ms Kaur’s son found her body at her Glenwood home on Tuesday, March 7.

NSW Police have charged her husband, Jagdish Singh, with murder. The vigil will be held be on Monday evening.

It will remeber Harjit along with all women who have lost their lives due to domestic violence.

Ms Kaur was the second Sydney woman who police allege was murdered by a partner this week.

Blacktown mayor Stephen Bali urged the whole community to come together at the vigil and help put an end to domestic violence.

“Violence against women is a national emergency – and it must stop,” Cr Bali told Blacktown Sun.

He adds - “Local support for events such as Ms Kaur’s vigil is a reflection of the seriousness with which people view family violence, and of the growing awareness that such violence can cause terrible physical and psychological harm.”

Blacktown MP John Robertson says that it appears Ms Kaur is the ninth woman to die from domestic violence in Australia this year.

“This is an extremely saddening time for our community as we all gather on the village green to remember the life of Harjit Kaur, and to highlight the fact that violence against women is a national crisis that continues to grow,” Mr Robertson added.

The vigil will take place from 5.30pm on Monday, March 13 in the Village Green on Flushcombe Road, opposite Westpoint. 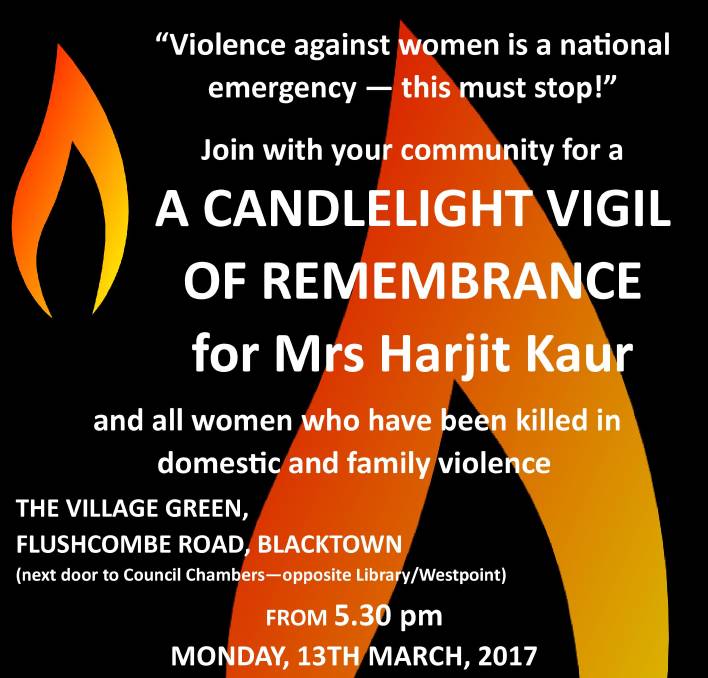