As part of combating coronavirus, all foreigners including OCI holders have been restricted from visiting India.

"I planned to travel on March 29th to Chennai via Singapore. But as India has put a travel restriction on OCI cardholders we now have to comply with it," says Karthik Vilvananthan.

"When countries like Australia initiated travel restrictions to only coronavirus affected countries, India all of a sudden put restrictions on to all countries which makes no sense. However I do respect the decision," he told SBS Malayalam.

Karthik along with three of his friends had planned to travel to India for two weeks till mid-April. However, as India has put travel restrictions to all foreigners including OCI holders on Thursday morning, he is confused about what decision he has to take. 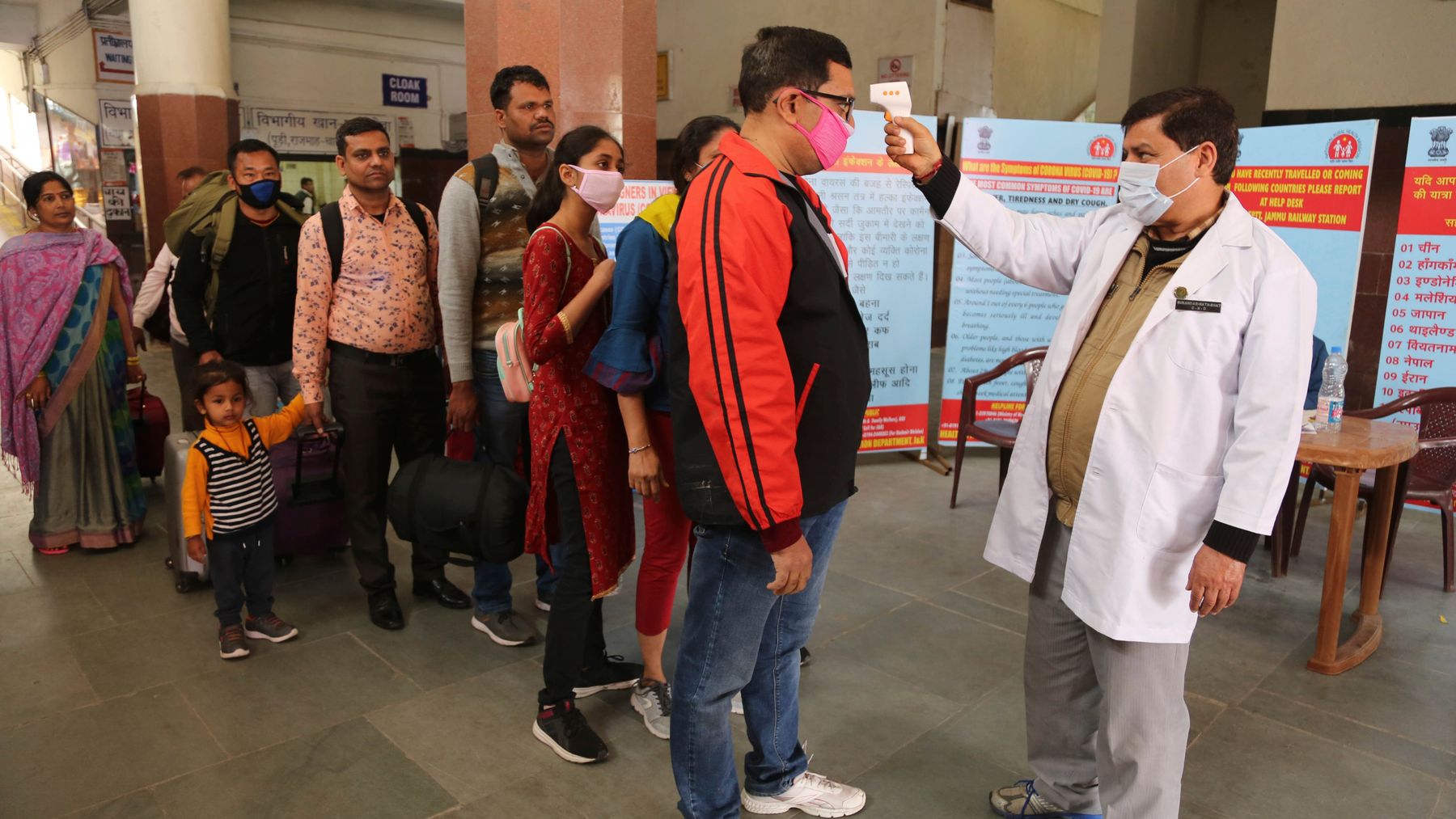 An Indian doctor checks the temperature of passengers at a railway station as a precautionary measure against the new virus in Jammu, India
AAP Image/AP Photo/Channi Anand

"I may have to postpone it. As it came today morning I couldn't decide on it. Anyway, we have to obey the Indian government's decision. So I will make a decision soon."

Karthik is among many who planned to visit India.

As part of precautionary measures against coronavirus, India has closed its borders with all countries early Thursday. This has caused confusion among those who were planning to visit their homeland for holidays.

According to Dr Harsh Vardhan, Union Minister for Health and Family Welfare, the restrictions will come into force on March 13th. Foreign nationals who plan to visit India for an emergency will have to contact their nearest Indian Mission.

"Indian nationals are strongly advised to avoid all non-essential travel abroad. On their return, they can be subjected to quarantine for a minimum of 14 days."

Also all travellers planning to visit India have been advised to avoid non-essential travel to India.

"Incoming travellers, including Indian nationals, are advised to avoid non-essential travel and are informed that they can be quarantined for a minimum of 14 days upon their arrival in India,"  Dr Harsha Vardhan's tweet reads.

All existing visas, except diplomatic, official, UN/International Organizations, employment, project visas, stand suspended till 15th April 2020. This decision will come into effect from 1200 GMT on 13th March 2020 at the port of departure.

Many cancel and postpone travel

Others have cancelled or postponed their visit to India. Melbourne based Molly Kuruvilla and family are among them.

"We planned to travel on February 13th to Kerala. But we postponed our travel to August fearing the spread of coronavirus," Molly said.

"We feared that if we reach India we would be quarantined and if so the journey would be a total waste. So we postponed it to August hoping that everything will be fine by then."

There are many who are in India now for various reasons. They say that unlike before there are very less passengers in the airlines and the airports are seen empty.

In the wake of coronavirus, the Indian government has announced that all passengers travelling from overseas must fill out a self-declaration form also known as self-reporting form. 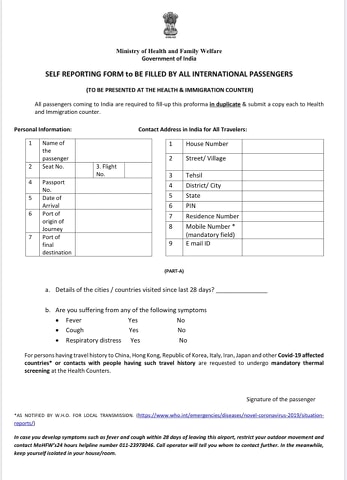 self-reporting/ self-declaration form to be filled by passengers

"I came to India for my dad's funeral," says Bovas Johannan who travelled last weekend from Melbourne. "People here are panicked that even very limited people turned up for the function. As I travelled through Singapore I had to undergo thermal check-ups and extra screenings at both ports."

"All passengers were given two self-reporting forms each before landing. The form asks the passengers to fill in the details of the countries visited in the last 28 days and to mark the symptoms of coronavirus if we are suffering from any of those," adds Bovas who is in Kerala, the southern state of India.

Travellers also say that there are less people seen in airports and in flights.

"I travelled through Malaysia on March 9th. There were only 20 people on board the flight. Even the airport in Kochi, India looks empty than usual," Ashok Mathew said.

"I came to India for three weeks. But if the situation worsens, I may fly back to Melbourne early," he added.

The passengers also have to fill their personal information and their contact details during their stay in India. The passengers who fill out the forms are asked to duplicate this and submit a copy each to the Health and Immigration counter. 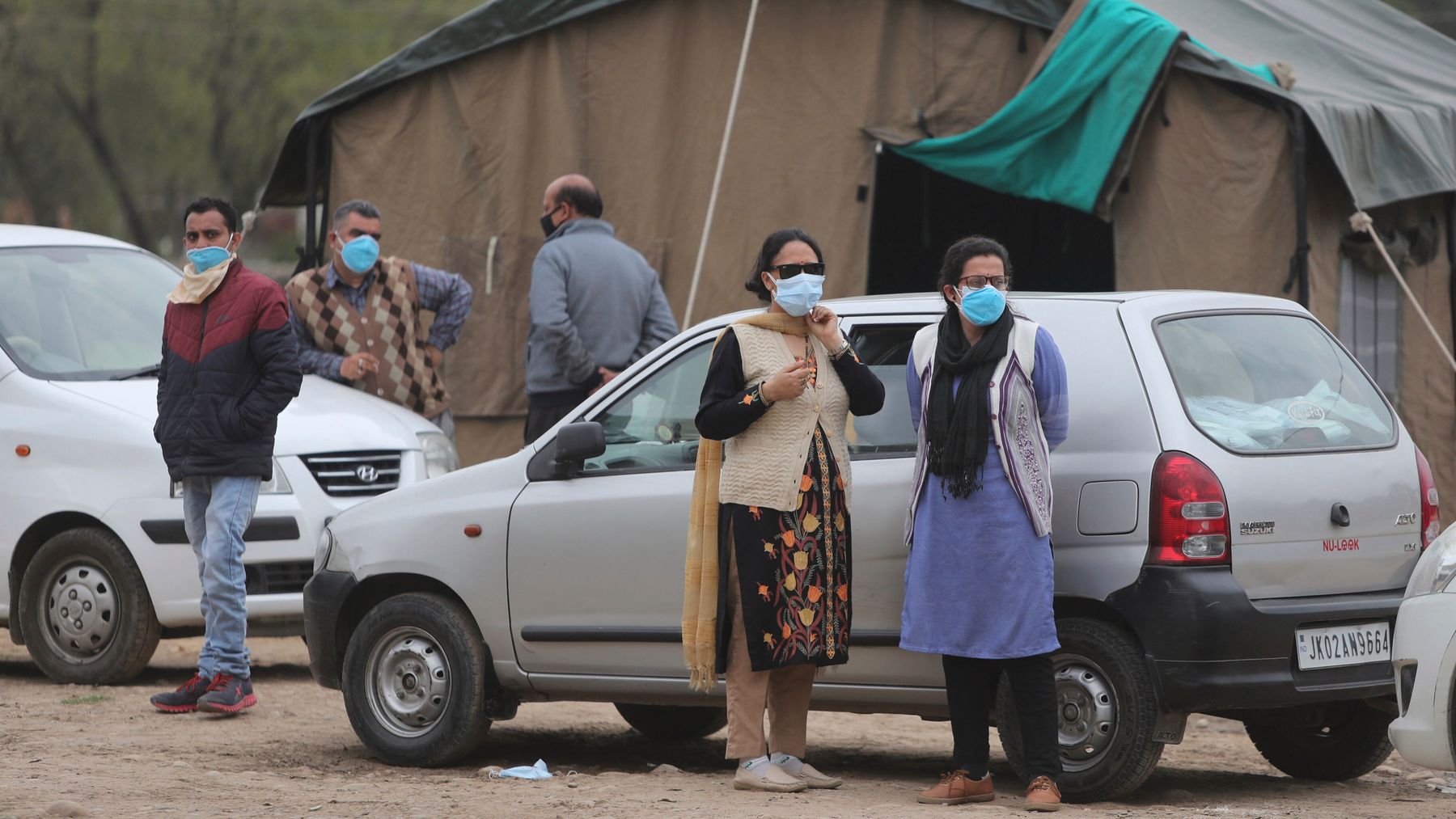 "All foreign and Indian nationals entering India from any port are required to furnish duly filled self-declaration form (including personal particulars i.e. phone no. and address in India) and travel history, to Health officials and Immigration officials at all port," reads the statement from the Indian Ministry of Home Affairs.

Earlier India has imposed tougher border control measures to combat the COVID-19 outbreak by putting more restrictions on travellers in and out from France, Spain and Germany. Besides this, the government has taken further measures on March 10th for people travelling from or have visited Italy and South Korea.

The Directorate General of Civil Aviation (DGCA) has stated that it is mandatory for the travellers who have visited these countries to submit a medical certificate of having tested negative for COVID-19 to enter the country. These must be issued from the laboratories authorised by the health authorities of these respective countries.

However, on Thursday morning the country has closed its borders putting travel restrictions in place to all foreigners visiting the country. 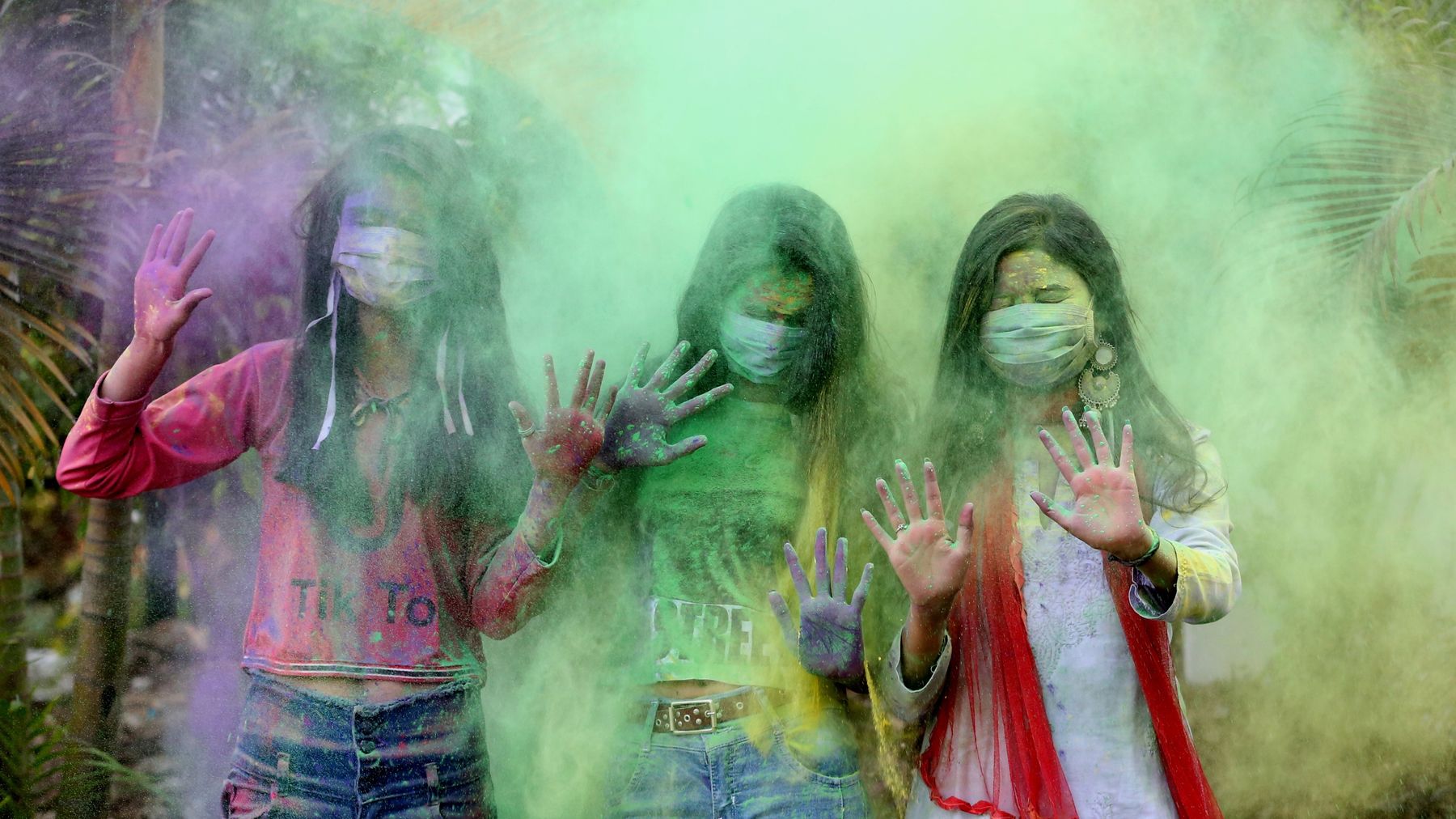 According to the reports, the number of confirmed cases in India has risen to 61 with many cases reported from Karnataka, Kerala and Pune. India had already suspended visas granted to the nationals of Italy, Iran, South Korea, Japan and China when the coronavirus started spreading in the country early March.

India has also cancelled many major events. Celebrations of Holi festival, across the country were subdued. Initially, there were only three cases reported in India. Three medical students who returned from Wuhan the epicentre of the outbreak to Kerala were tested positive. However, all three were cured and discharged from hospitals. It was after a month that more coronavirus cases were reported in the country.

The number of patients in Kerala now stands at 14 after a three-year-old child and his parents who arrived from Italy were tested positive to the virus. The state government has implemented stringent measures to combat the spread by closing schools, cancelling examinations, shutting down the movie theatres and declaring avoiding gatherings.