Coming Up Fri 6:00 AM  AEST
Coming Up Live in
Live
Arabic radio
More

Fifteen Yazidi families have arrived over the past few months in Wagga Wagga in regional New South Wales as part of Australia’s commitment to a special intake of 12,000 people affected by the conflict in Syria and Iraq. This week they shared their story with SBS Arabic24's Heba Kassoua.

Fleeing the self-proclaimed Islamic State (I.S.) militant groups’ advance in Iraq in 2014 - the families have survived traumatic journeys,  walking for days in the mountains of Sinjar - before reaching the safety of the Kurdish region.

The families spoke about young children dying of thirst and hunger while trapped on the mountain. Others recall attacks on their villages and the kidnapping of their daughters and relatives by I.S. fighters. Wagga Wagga has become the Yazidis' new home. First impressions of the regional city, five hours drive from Sydney, include being amazed at how warmly they have been welcomed by neighbours, volunteers and staff from the Multicultural Council of Wagga Wagga.

Khayro Kunji Khayro is a former journalist. He recalls holding his six month old daughter while leaving his home without having time to bury his father who’d passed away from a heart attack.

He had to leave in a hurry, having heard of atrocities against Yazidis in neighbouring villages. Khayro says he is constantly amazed at the friendliness in Wagga Wagga.

"What is really strange is that people in Wagga Wagga - everyone, neighbours and others smile at me and they say Hi," Khayro tells SBS Arabic24. "It really flatters and makes me want to live with such people."

"Sometimes, I walk past and I get shy I don’t say hi but then they say hello and greet me. I get embarrassed and I don’t know if it’s the same everywhere or if it is only in Wagga Wagga. I like this." 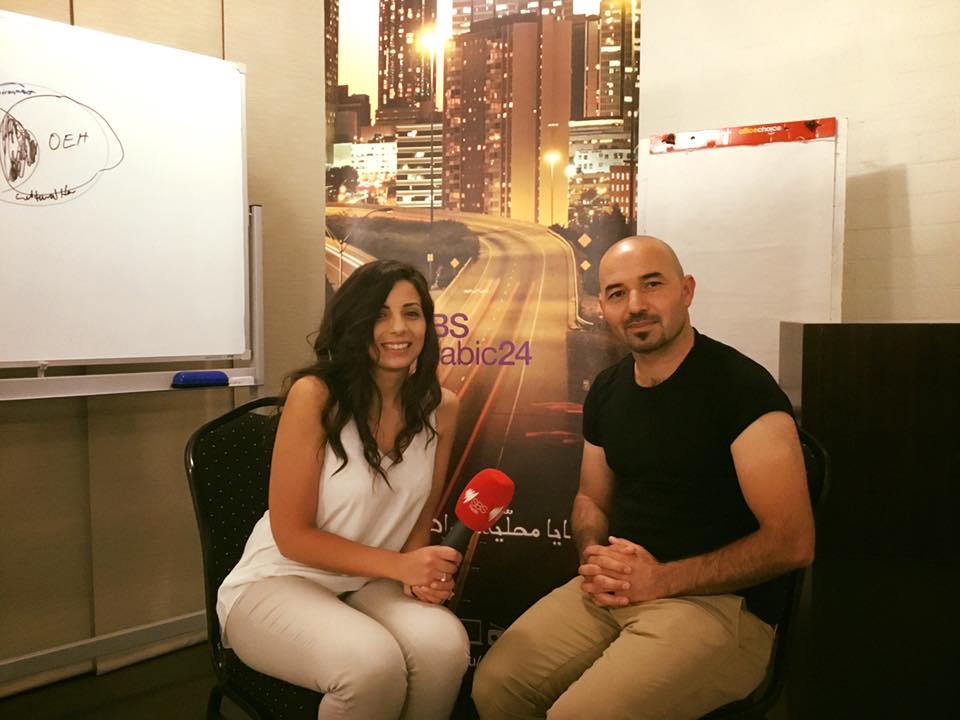 "What is really strange is that people in Wagga Wagga - everyone, neighbours and others smile at me and they say 'Hi'."

Fares’ family ended up being split apart by I.S.  His fifteen year old son was separated from the family in Turkey and they only found out later he had crossed the sea by boat to Europe and had been able to get to Germany.

"We were resisting ISIS for 4 hours.," he tells SBS. "We had to leave in the morning and walk for about 10 kilometers."

"ISIS separated my family. My 15 year old son is now in Germany. He went there by boat.” 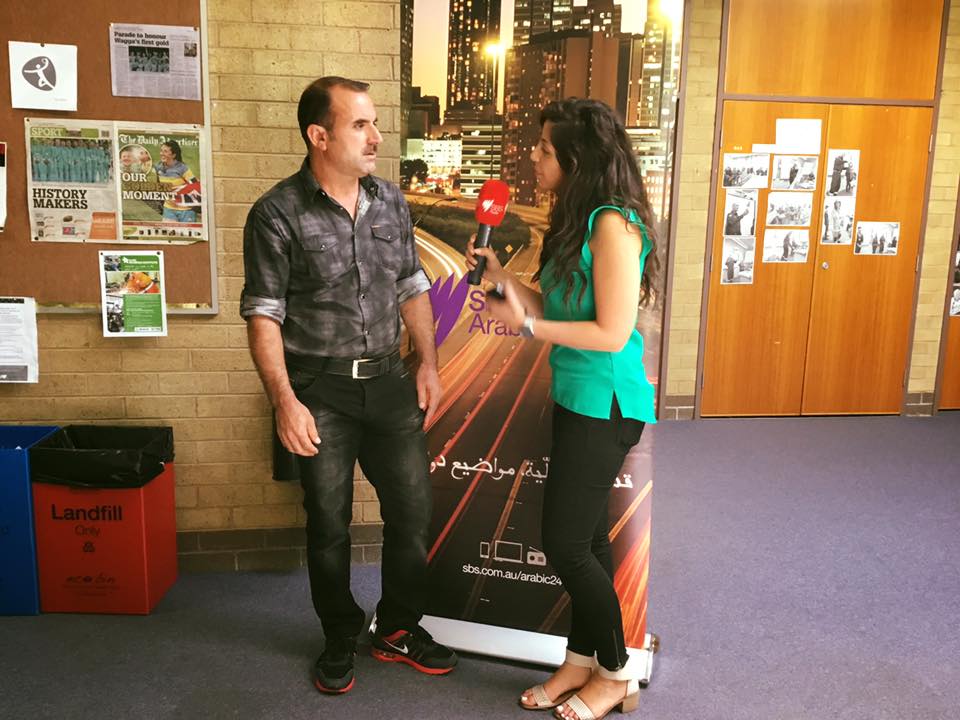 Fighting back tears as they told their personal stories of hardship - the Yazidi refugees also explained they were targeted in Iraq as a religious minority.

“When we got here, we knew we were safe and no one was going to hurt us or kill us because of our religion.”

Khalaf Ali Kam found it difficult to speak of his experience having had to wrap his young daughter’s feet with clothes to help her walk in the mountains for hours before reaching safety in the Kurdish region of Iraq.

“My daughter was 3 years old at the time," says Kam. "She suffered more than all of us because she was so young.” 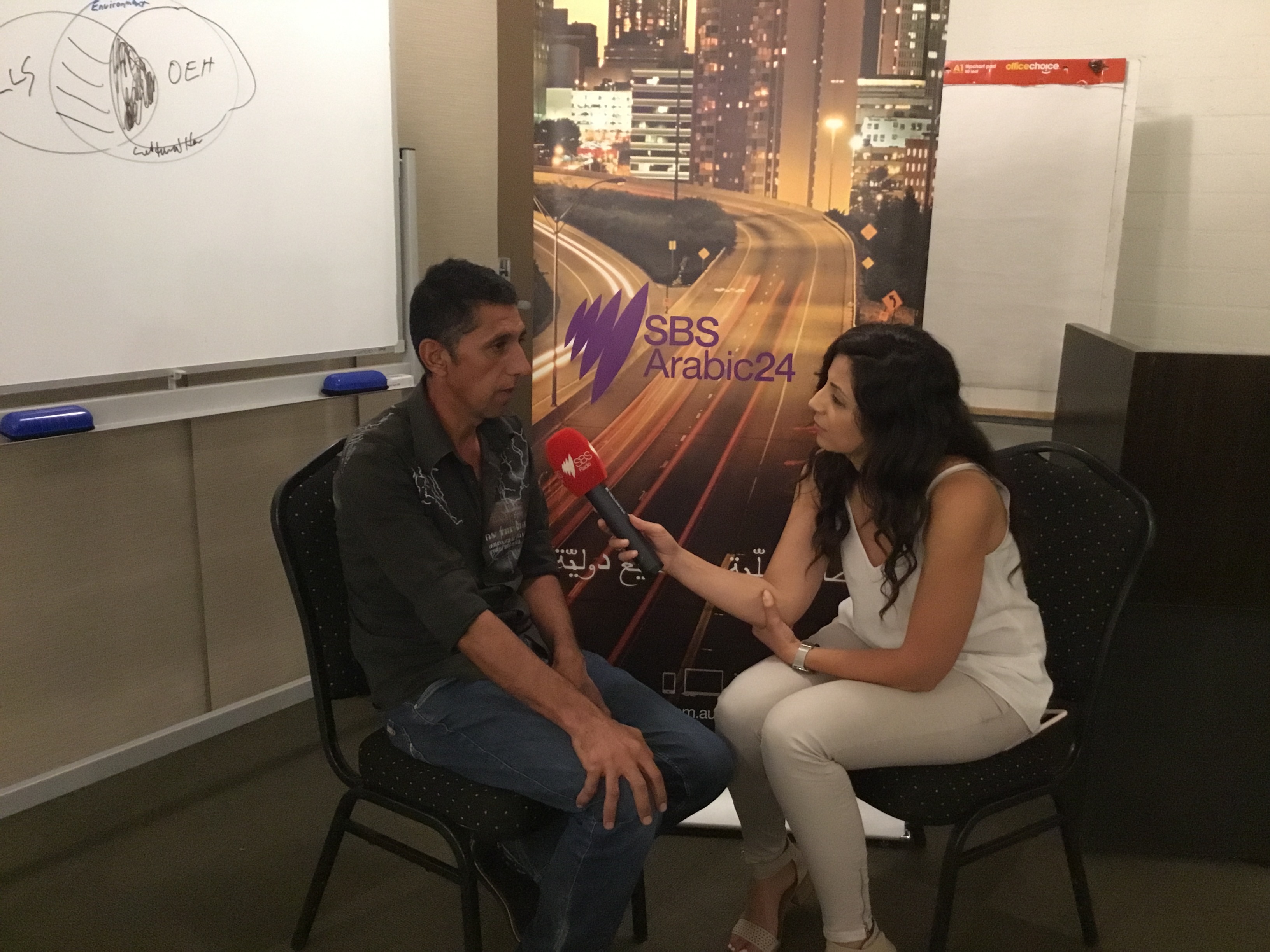 Despite the distressing memories and feelings of despair – the Yazidi refugees are now full of hope for the future in Australia.

They say the warm welcome in Wagga Wagga has made them feel right at home.

The Multicultural Council of Wagga Wagga plays a vital role in making that happen. Case workers complete a needs assessment analysis before the families even arrive to make sure the children and the elderly, in particular, are well looked after. 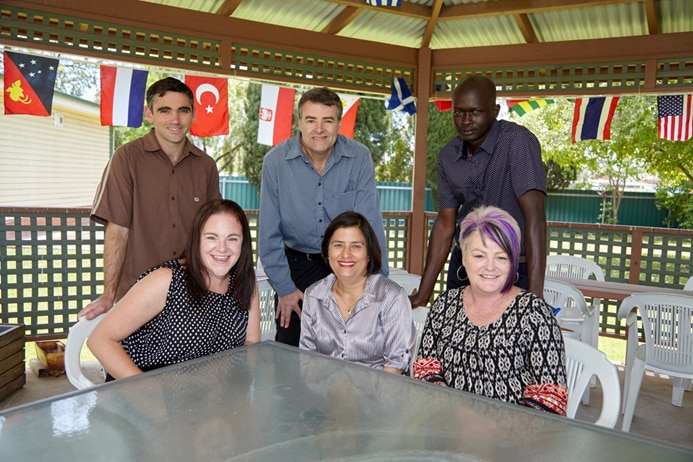 "Within the first couple of weeks we get them straight into Medical to see a doctor," says Dee Mace from The Multicultural Council of Wagga Wagga.

"We get them into TAFE especially that is a very high need for our clients as they haven’t had access to education."

"They are very keen to get into TAFE. It also helps them with their settlement. Throughout their settlement period we teach them everything they need to know about Australian life. We go through Australian law, their rights and responsibilities as tenants. We look at family relationships, healthy eating and fire safety."

See the full News report from SBS News below:

Mace says case workers assigned to the families wait for the refugees at the airport and take them to their fully furnished homes and register them with Medicare and at TAFE for English lessons.

“Before our clients even come to Australia or Wagga Wagga, we have already done a needs assessment and we assess what needs the families may require when they come," she explains.

"We have already set up accommodation for them so as soon as they get to Wagga they walk into a home that has all their furniture and we also provide food.” 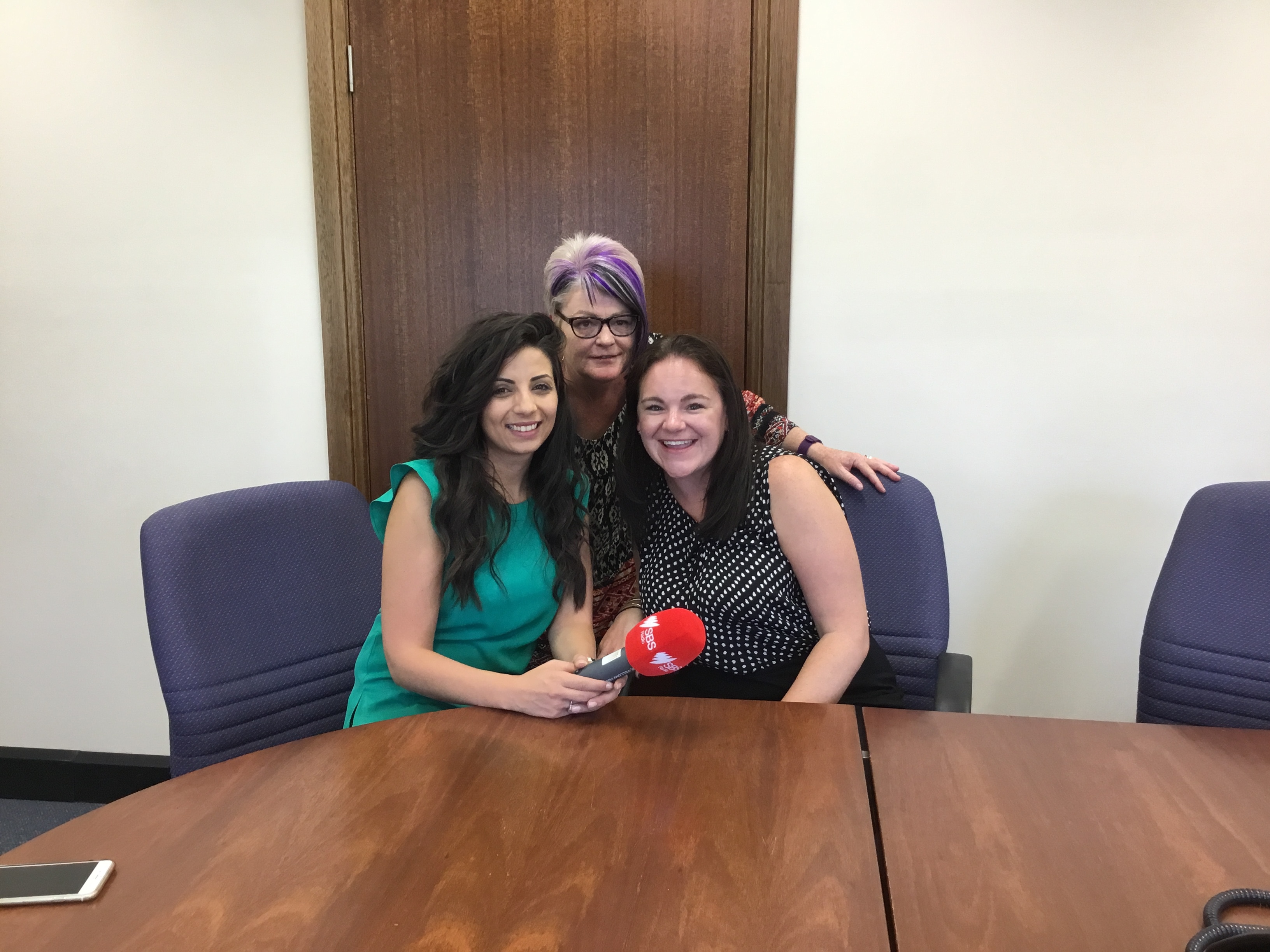 Ms Mace says the Multicultural Council supports refugees for the first twelve months so they can become partially or fully independent.  The Council also helps the refugees find work.

Head of English for Speakers of Other Languages (ESOL) at TAFE NSW Riverina Institute, Elizabeth Stott says they help ensure all new refugees are enrolled at TAFE. She explains how learning English is a critical achievement so they can communicate and eventually get a job.

“This is the first time that the Wagga area has welcomed new arrivals from Iraq," says Stott.

"They have only been in class a very short period of time but we have noticed their keenness." 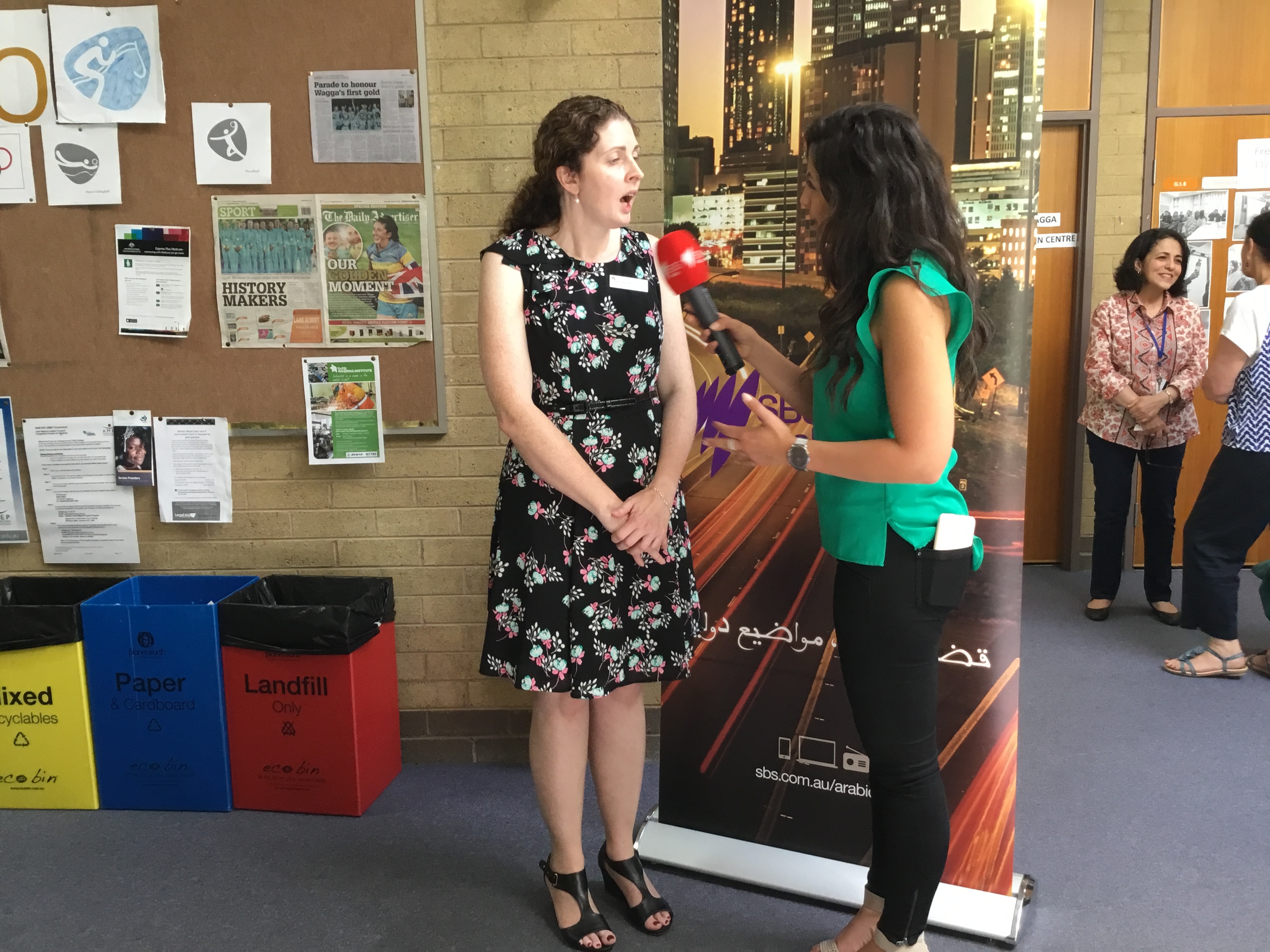 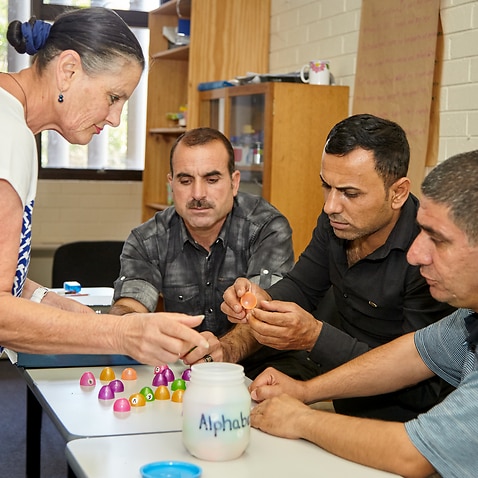 "Everyone always attends. And we have noticed that English is developing for some of them quite quickly. We are just hoping that with their English classes we are also helping them through their settlement process because it is not only focused on English but also other sort of areas that is helping with their settlement.” 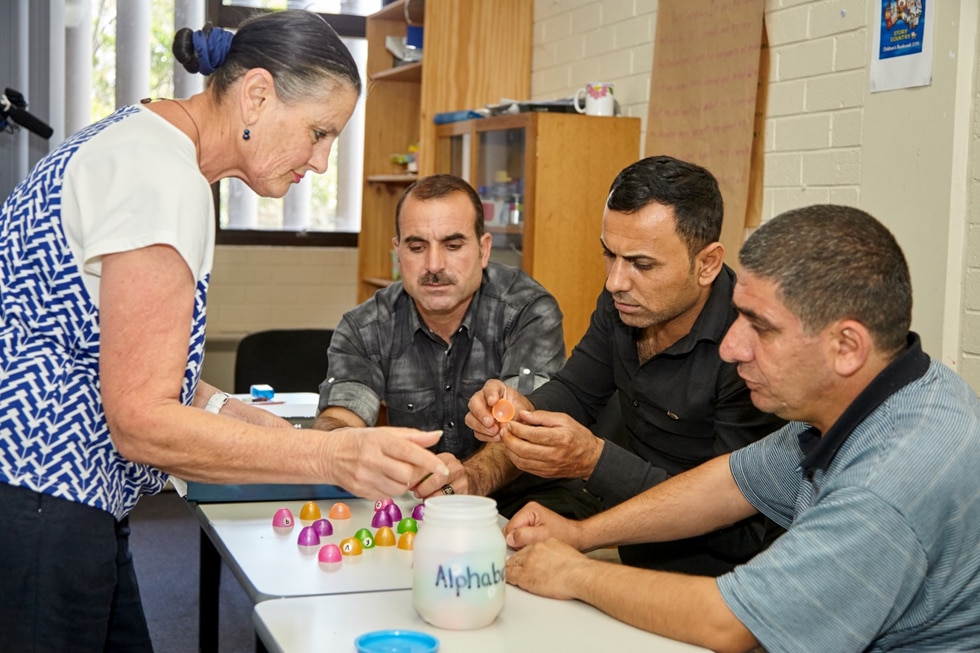 The refugees also say they feel learning English is their number one priority.

"English is not a very strange language to us," explained one man. "We cannot speak it but we want to learn quickly and do a year’s worth of work in two days."

He explains that he hopes it will allow him to express his gratitude properly.

"We want to do that for two reasons," he says. "First, English is a global language and everyone wants to learn it. Secondly, English is going to be our mother tongue because Australia is now our homeland and we have no intention of leaving it. We hope to give back to Australia just like every other Australian." 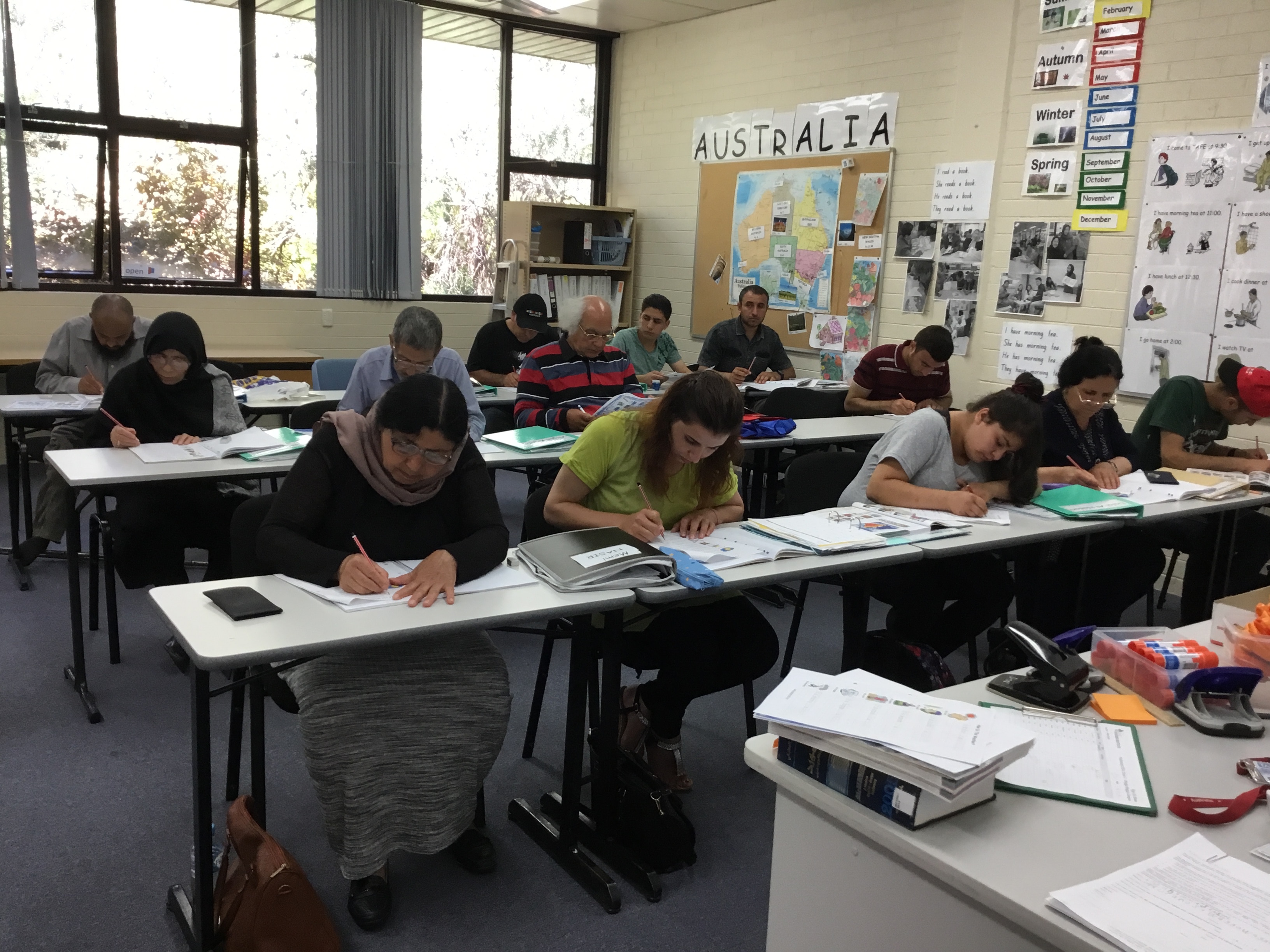 Volunteers are also a very important part of the resettlement process. As an Australian Iraqi, Laith Gardner, is happy to be of service to the newly arrived refugees. In fact he sees it as his humanitarian duty.

"As an Arabic speaker who can also speak English, I thought the best thing I can do is help the new arrivals with everything," he tells SBS. "I help them with Centrelink, Medicare and when they need to go to the bank." 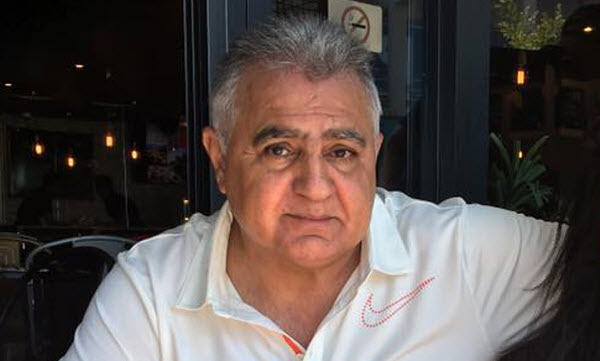 Wagga local and Australian Iraqi, Laith Gardner is one of the locals who have volunteered to help out the new Yazidi arrivals (Source: Facebook)
Facebook

Salwa is another volunteer who helps interpret for the refugees in Kurmanji – a dialect of Kurdish. She explained how grateful they are to be in a safe place.

"The people in Wagga Wagga are very nice and welcoming," she tells SBS. "When I visit the Yazidi families I see their neighbours coming in and bringing them everything they need. I asked the families if they knew them personally and they said no but they come around all the time." 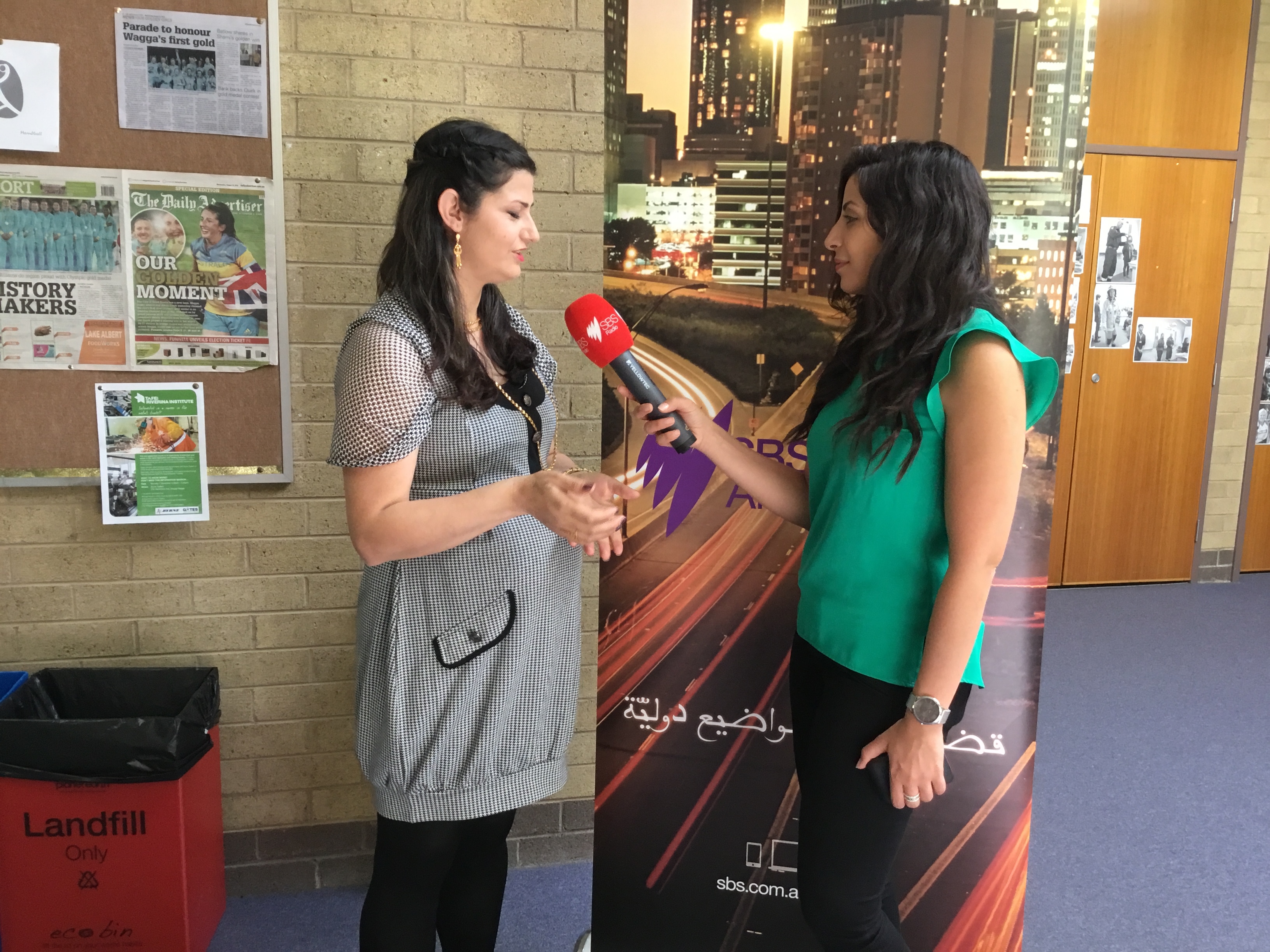 Mr Gardner says Wagga Wagga is the little town that could – it has everything to make the new arrivals feel at home.

He says Wagga locals have been very positive about their town’s new members.

"The people here have helped them although they cannot communicate.," Mr Gardner says. "Many times I will get a call to take someone to hospital but by the time I get there their Australian neighbour has already helped them and took them there." 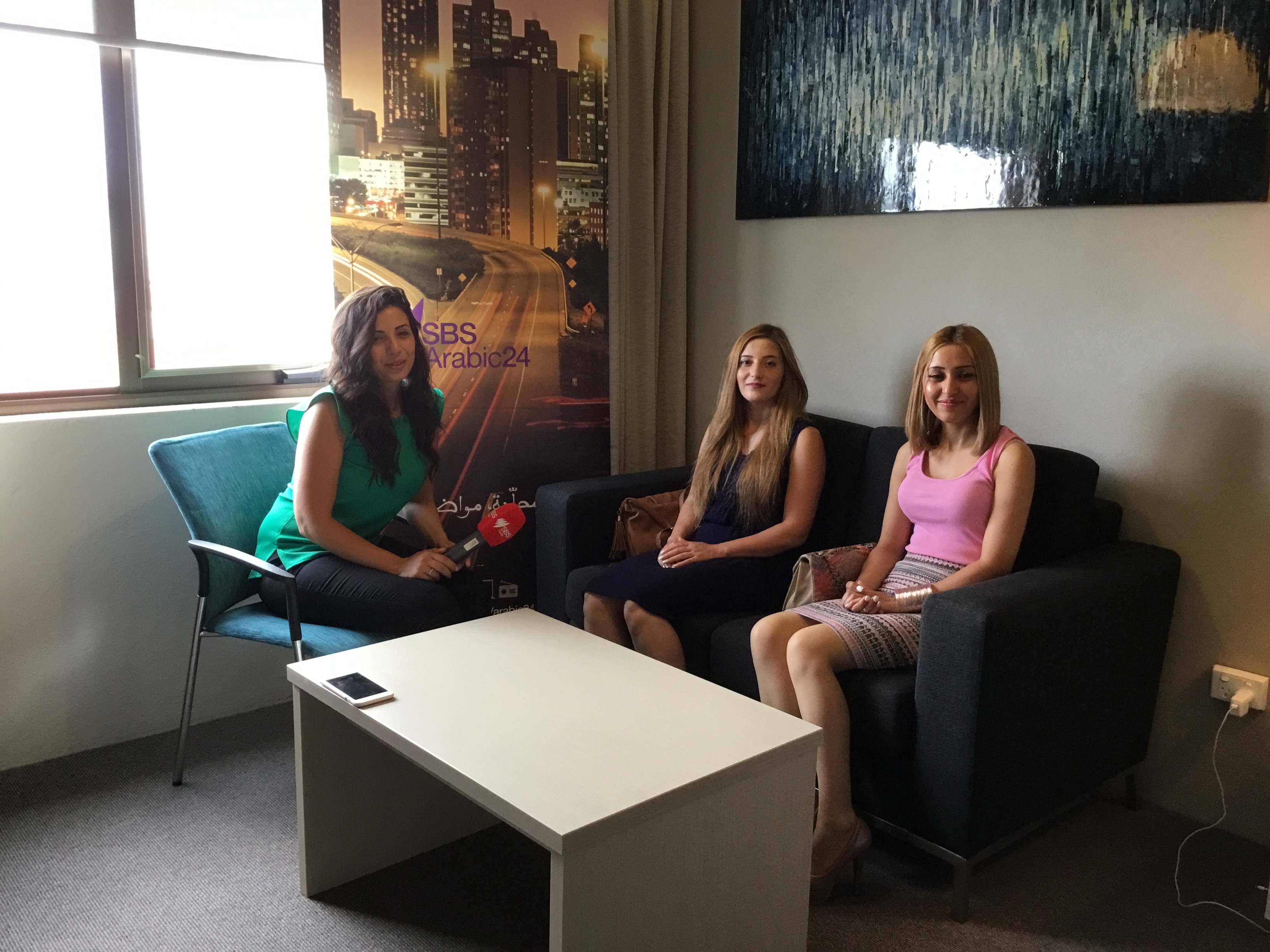 The future is looking very bright for some of the refugees hoping to overcome their past traumas. Khayro, for example, wants to learn English as quickly as possible in order to be able to complete his studies in Video Journalism. His intention is then to document the stories of his people and those of other minorities who have suffered around the world. He says in Australia he feels he can finally do that.

Arias Khayro has been Wagga for two months and says it’s great that all the Yazidi families are arriving together. She says they really feel like part of a bigger family now.

"The people of Wagga Wagga don’t make us feel like strangers. They treat us as humans just like them. That is the best thing about Wagga Wagga." 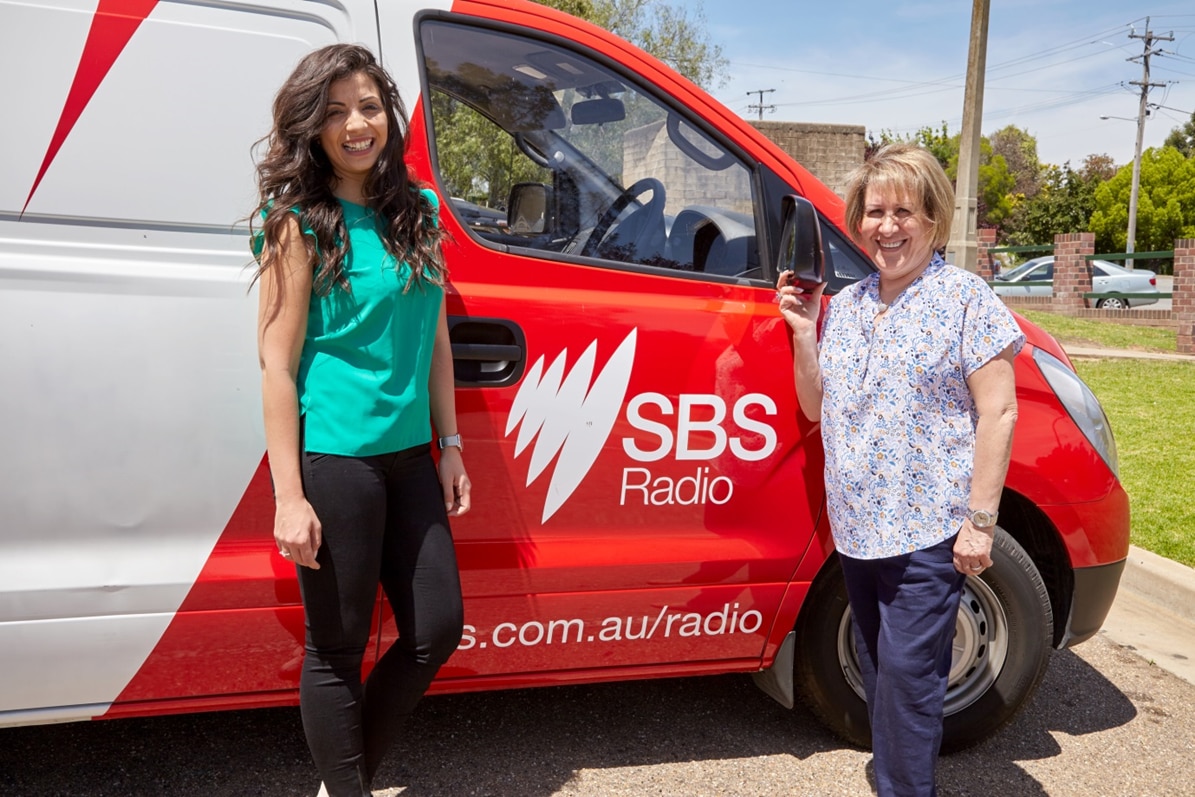 Update: In June 2017 SBS Arabic24 returned to see how the community is settling into their new life, seven months on. Read the update here:

Listen to the full feature (in Arabic) via podcast from SBS Arabic 24 here: 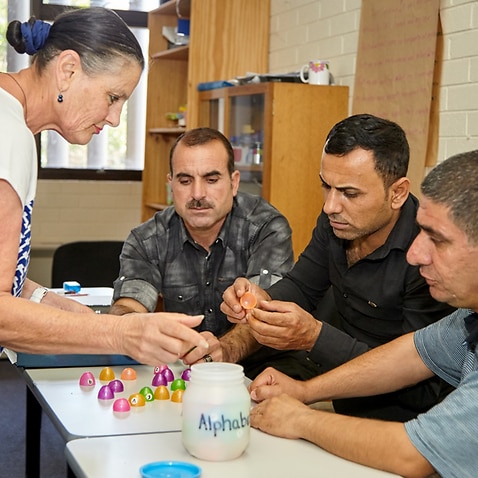