Queensland Greens have announced Navdeep Singh as their second candidate for the Senate as the party prepares for the return of its lead candidate Larissa Waters to federal parliament.

An Indian-origin Greens Party politician Navdeep Singh will join former Senator Larissa Waters in their run for Senate from Queensland.

Navdeep is working in close association with Ms Waters who stepped down last year after discovering she was a dual citizen.

Senator Waters has already won the party’s preselection for the No 1 Senate spot from Queensland, winning three-quarters of the vote in April 2018.

Navdeep told SBS Punjabi that he was inspired to join the Greens and run for the Senate because of the divisive political atmosphere created by One Nation, Peter Dutton and the others.

“Migrants are a huge part of the Australian community, and for these politicians to demonise and vilify us for cheap political point scoring is very wrong. Refugees and family reunions should not be used as a political football,” he says.

“The values of our diverse cultures from Europe, Asia, Africa and Latin America, combined with the cultures of our First Nations people, have created positive and thriving communities in Australia, which should be celebrated and encouraged."

“Unfortunately, as the current government has failed to provide sustainable growth and a better lifestyle to all Australians, we see those who came across the seas blamed for our problems. 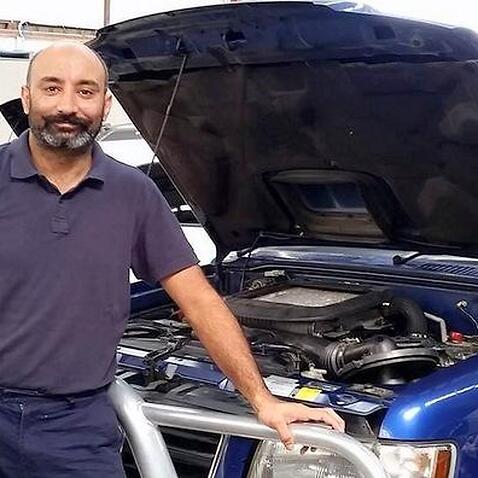 Navdeep says that being born in North India in a farming family, he was always keen to learn the importance of sustainable farming practices and protecting the natural world from over-development.

After completing a Bachelor of Mechanical Engineering, he moved to Australia with his wife in 2007, where he completed a Graduate Diploma in Environmental Engineering at Griffith University.

Since 2009 he has grown two successful small businesses in the automotive and food industries.

In 2016, he contested state elections against the Queensland Premier Annastacia Palaszczuk at the seat of Inala. Navdeep Singh was among the hundreds of people gathered at Brisbane to protest against Australia Day and rally for Aboriginal sovereignty.
Supplied

Navdeep says the primary focus of his campaign will be social and economic justice for families, particularly family reunions and parent visas for migrants.

“Family ties are fundamental to human happiness. The Greens have a clear vision for workable family reunions within a reasonable timeframe which allows families to enjoy unity without any discrimination.

“Young and hardworking immigrants from diverse and vibrant cultural backgrounds are one of Australia’s most significant economic assets. Reuniting families is good for families and good for the Australian economy, as it allows families more work flexibility and increases wellbeing.” Greens to oppose new parental visa in the parliament

Navdeep said that the time is ripe for Australia to embrace more diversity in its political institutions.

“Although migrants make up such a large part of Australia’s population, we do not see this reflected in our Parliament; I want to change that,” he says.

“The other parties have failed Queenslanders. They’ve taken over $100 million in corporate donations in just the last five years, looking after their big business mates, while ignoring the needs of everyday people."

“Wages have stagnated, healthcare and education are going backwards, and people can’t pay their bills. It’s no wonder these politicians try to distract us by whipping up fear and division.”