The Australian Border Force (ABF) has said an error was made in notifying a Pakistani family stranded outside Australia who had applied for an exemption to the country’s coronavirus travel ban.

On the night of June 22nd, Melbourne-based store manager Danish Ghori received an email from the Department of Home Affairs stating that his wife and two kids had been exempted from Australia’s travel restriction policy.

Exulted upon receiving the long-awaited approval, the 35-year-old jumped out of his bed to call his wife Urooj Usman who is currently stuck in Karachi along with the couple’s Australian-born children aged one and two.

'Best and worst day of my life'

“I immediately picked up the phone and called Urooj to inform her that she and our kids Rayan and Zara had been given special permission to travel to Australia after months of separation and six failed attempts,” said Mr Ghori.

“We were over the moon. I told my kids to get up and start packing. I even started looking at the available flight options flying out of Pakistan.”

But the Ghori family’s happiness was short-lived as precisely ten minutes after receiving the travel grant, another “ill-fated” mail landed in Danish’s inbox.

“I immediately clicked on the email and could not believe what I was reading. The email from the Department stated that wrong advice had been sent to us and that Urooj and the kids had in fact not been exempted,” said Mr Ghori. 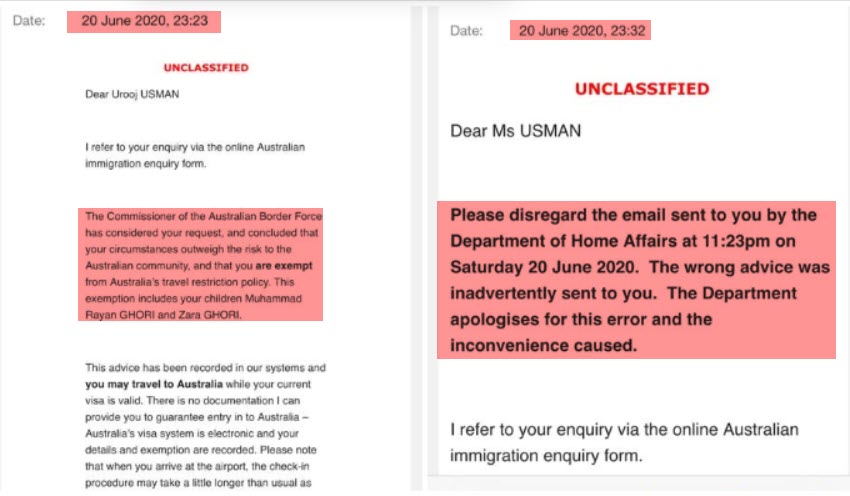 Snapshots of the notifcation grant (L) and and rejection (R).
Supplied

At present, temporary visa holders can only enter the Australian borders if they have been exempted by the ABF from the country’s travel ban - a decision which relies on the ABF Commissioner exercising his discretion on a case by case basis.

When contacted, an ABF spokesperson told SBS Punjabi that an error was made in notifying the traveller who was immediately advised of the error and was provided with the correct information within 10 minutes of the original notification.

“Decisions by the ABF Commissioner regarding inbound travel exemptions are balanced against the Government’s imposed rules and guidelines (which entail the health risks posed to the Australian community by international travellers,” said the ABF spokesperson. 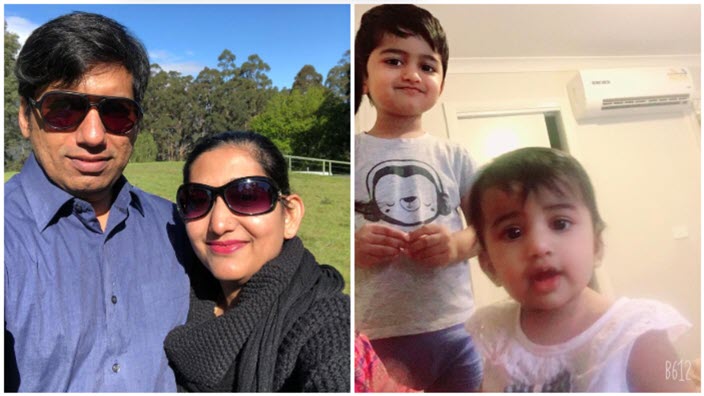 Danish Ghori and Urooj Usman with their children Rayan and Zara.
Supplied

Separated from her husband for four months, Ms Usman who has been living in Australia for six years on a temporary skilled visa said the email bungle has left her family “shattered.”

“It’s not just an error, it’s a decision that is going to have a lasting impact on four lives. We have been desperately waiting to be reunited with my husband and to my home in Australia,” said Ms Usman.

The news could not have been more ill-timed for the Ghori family who had recently received a pre-grant for permanent residency in Australia after a long wait of two years.

“Our pre-grant for 887 visa application had been approved, but to receive a full grant, Urooj and the kids have to be onshore as directed by the Department. I had applied for exemptions for them based on that pre-grant,” said Mr Ghori.

He added that his family would be separated for a long time if his wife and children were not allowed to enter within the next few days.

“Their skilled visas are expiring in the next few days. If they are not allowed to enter before the expiry date, I wouldn’t be able to see them until Australia opens its international borders.” A snapshot of pre-approval for permanent residency addressed to Mr Ghori.
Supplied

Greens Senator and immigration spokesperson, Nick McKim who had raised the family’s plight in the Parliament last week said Ms Usman must be allowed to re-enter Australia as she has a “strong compassionate case.”

Senator McKim added that the Department must probe the matter.

“It must have been so difficult for Urooj and her family to be told that they could come back to Australia and then to have their hopes dashed.  The minister’s got to get to the bottom of this because it is not good enough that when people are stressed because their families are separated, it's very difficult to deal with situations like this so the government has to do a lot better than it has,” he added.

Besides the Ghori family, there are hundreds of other temporary migrants who have been separated from their loved ones because of the country’s coronavirus-induced border closures.

Independent MP Zali Steggall who has also raised concerns of the long-term visa holders in Parliament said her office is working to ensure the “best prospect” for applicants seeking travel exemptions.

“We are coordinating with the staff at the Department of Home Affairs to ensure the best prospect for these applications and to understand where there’s been a rejection, what are the grounds for the rejection. Sometimes it has taken several applications to be successful and some are still pending,” she said. 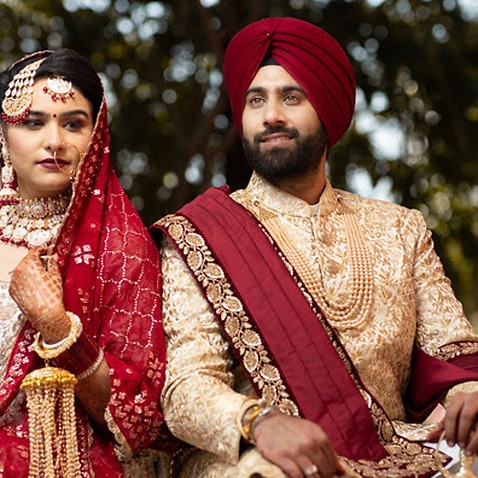