"Audiences at the festival will get a close peek at the cultural and social conflicts the Indian LGBTIQ+ community faces even today," says the filmmaker and gay activist Sridhar Rangayan.

India’s first gay film to get a child-friendly classification, Evening Shadows will have its world premiere in Sydney during the Mardi Gras Festival.

The Central Board of Film Certification (CBFC) in India, under its new chief Prasoon Joshi, cleared this gay Indian coming-out movie with ‘U/A’ certificate.

The film’s director Sridhar Rangayan told Indiatimes that the CBFC members were contemplating giving the film an ‘A’ certificate but after reasoning with them, it was cleared.

He said, "But I reasoned that mine is a mainstream Indian film, not urban multiplex or a niche documentary targeting the intelligentsia. And it is important for it to have a wider TV and theatrical release, reach out to families, as the attempt is to change mindsets."

EVENING SHADOWS TO PREMIERE IN SYDNEY

Evening Shadows will have its world premiere in Sydney during the Mardi Gras festival.

Set in a small town in southern India, the film, Evening Shadows, explores how a son comes out to his mother and what happens thereafter.

The film will premiere at the internationally renowned Queer Screen Mardi Gras Film Festival in Sydney, which runs in conjunction with the Sydney Gay and Lesbian Mardi Gras.

"We couldn’t have asked for a better showcase for the world premiere of our film than Mardi Gras Film Festival, which is one of the oldest and most prominent film festivals celebrating its 25th edition this year," the filmmaker and gay activist Sridhar Rangayan told Gay Star News.

"Our film not only underlines the challenges, but celebrates diversity.

"Audiences at the festival will get a close peek at the cultural and social conflicts the Indian LGBTQ community faces even today, as well makes a strong plea for gender equality."

Rangayan is ‘thrilled’ with the film’s rating which can be seen by everyone including children.

"Our main aim when we made the film was not only to reach out to the LGBTQ community, but also mainly to parents and families in small towns," he said at the time.

The main lead of the film, Mona Ambegaonkar, who plays the mother in the film, will be in Sydney for the premiere.

The 40th Annual Sydney Gay and Lesbian Mardi Gras will air on Sunday, March 4 at 8:30pm on SBS.

Celebrate all things that veer towards the queer with the Queer Binge -a colourful, thought-provoking collection of films and programs streaming free now at SBS OnDemand. 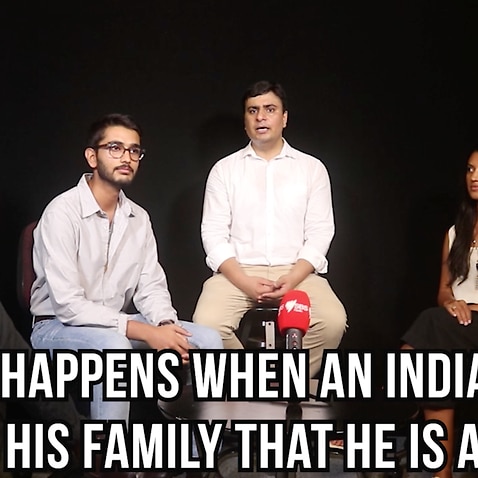 What happened when an Indian boy told his family that he is gay? 'I haven't cried like this in years': Migrants thrilled with the Yes vote Despite being spurned by family, Kamalika Dasgupta is an ‘out and proud’ gay