Every year Bijal Desai from Sydney makes a traditional Rangoli for her home during the Diwali festival, but this year she included traditional Aboriginal symbols in her Indian design out of respect for the traditional custodians of Australia.

Rangoli, usually made during the Hindu festival Diwali, is the art form which describes Hindu tradition and culture. It has become an integral part of the Diwali celebration and households in different parts of India have unique design attractively drawn and coloured in their home.

Indians who live in Australia, thousands of miles away from their motherland, have also kept this tradition alive by decorating their homes with colourful Rangoli designs, and celebrate the ‘Festival of Lights’ with joy and happiness.

One such Indian-Australian is Sydney-based Bijal Desai, who makes Rangoli every Diwali which showcases Indian culture and tradition but, this year, her Rangoli theme was unique and quite Australian. This Diwali, she made Rangoli that represents Indigenous culture and traditions, to acknowledge and celebrate the success of the First Nation’s people.

"Every year I try to include a different kind of design in my Rangoli," she told SBS Gujarati.

"As we are working from home this year, I received an email from my organisation, acknowledging the importance of NAIDOC Week 2020. And that’s how I made up my mind to draw a Rangoli which shows the Aboriginal culture and their heritage".

This year the Diwali festival dates and NAIDOC week dates coincided, with the festival of lights according to Hindu Lunar calendar falling on 12 - 16 November, and NAIDOC week celebrations falling between 8 – 15 November

Out of the five days of celebrations, 14h Nov was the Diwali Day.

Inspired by her daughter’s school project

Bijal’s daughter was given a school project as a part of NAIDOC Week and Bijal was inspired by the design of the project.

As Aboriginal and Torres Strait Islander peoples are the traditional custodians of the land we are living on, I believe we should acknowledge and extend our respect to their culture in our festivals and celebrations.

"This year the Diwali and the NAIDOC Week celebrations took place in the same period. Hence, it was little effort from me to give their symbols and design a place in my Diwali Rangoli”, she added.

Bijal drew the NAIDOC Week 2020 logo and a Boomerang – a symbol of cultural endurance and a tangible link to the Aboriginal heritage in Australia - in her Rangoli.

“I have been living in Australia for more than 20 years and like Aboriginal art and paintings very much.

"The inclusion of their culture and symbols in our art and celebrations also gives us an opportunity to teach the importance of the struggle and success of the Aboriginal people in Australia to the next generation". 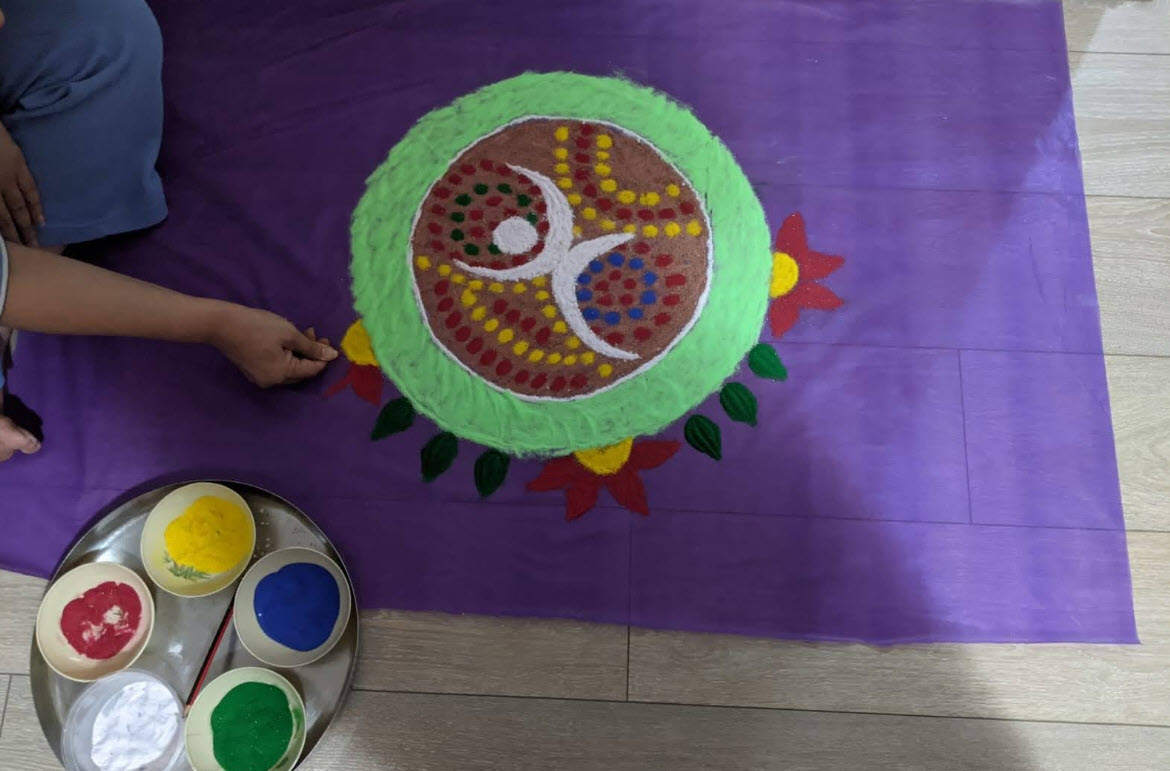 Bijal arrived in Australia in 1999 and has been making Rangoli ever since.  At first, she says it was hard to find the right materials for Rangoli, but it has become easier as the Indian population in Australia increased.

"Now, we can find lots of variety in colours, flower petals, sand and powder in the market which gives us the opportunity to think about unique designs in the Rangoli, she added.

Bijal, with her mother’s help and guidance, finished the Rangoli in just one and half hour.

"The main tasks of making the Rangoli includes finding a proper place in the house and the size of the design. I took the help of my mother and she guided me with the colours and the design as well", Bijal added. Recognize and celebrate Aboriginal art in our celebrations

Bijal has already decided the theme for next year’s Rangoli.

She is planning to draw Australia’s native animals, such as kangaroos and koalas, as well as the musical instruments of Indigenous communities.

"Recognition and acknowledgement of the First Peoples of Australia is our responsibility. Hence, we should include them in our celebrations, and I believe, it shows our real identity as an Indian–Australian,” she concluded.

** This story is a part of the SBS Diwali Photo Competition 2020. To see all entries click here.