Private Miller Mack’s image is iconic - frequently used as a symbol of Indigenous Australians’ important contribution to the ANZAC war effort. Yet for nearly a century, the soldier himself has lain forgotten, in an unmarked pauper’s grave. Now, says his grand-niece Michelle Lovegrove, he has finally been given the burial he deserves, as his body has been re-interred on Ngarrindjeri land.

“We will have a memorial service with full military honours and bury him on country,” Michelle Lovegrove told SBS Living Black on Thursday ahead of the Private Miller Mack’s reburial in the small town of Raukkan, South Australia – where he grew up.

Private Miller Mack served in World War I from 1916-17 alongside fellow Australian troops among the 7th Reinforcements in France.

The exhumation of his body from Adelaide’s West Terrace Cemetery for reburial in his home town marks a very rare, but significant moment in the shared history of Indigenous involvement with the ANZAC war efforts. “I think it’s very important because I’m not sure whether we’ve set a precedent, but we’d be one of at most, a handful of people who’ve been able to successfully negotiate the exhumation of one of our men – one of warriors - to bring them back home,” says Lovegrove.

“So that in itself is very, very important.”

Listen to the Michelle Lovegrove's full interview with Living Black Radio below:

With the help of his family and Aboriginal Veterans South Australia, Mack Miller’s service was held with full military honours with family, politicians and top service men and women in attendance last week in South Australia. 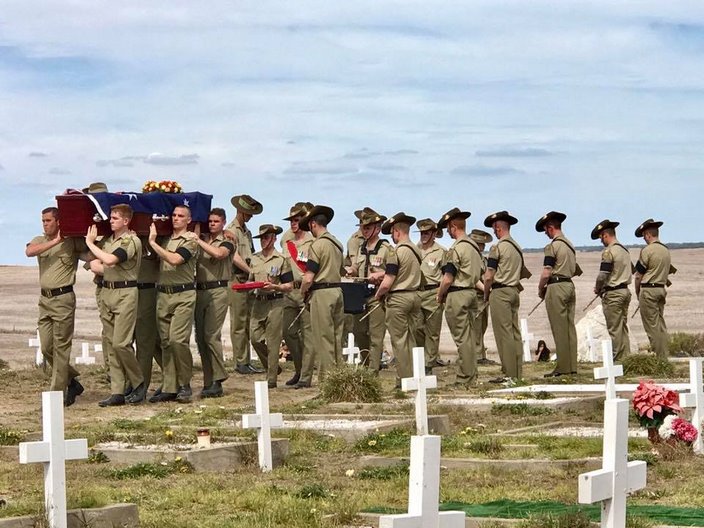 "They fought for their country - their land, as well as Australia.”

“We embarked a few years ago on a project to convince the many powers that be, that he should be exhumed and he should be taken back home,” Lovegrove, the great niece of Mack, tells SBS Living Black Radio.

“The importance of this is that this man was one of many Aboriginal and Torres Strait Islander men who fought as ANZACs in World War I. Only now, over the past few years, are we starting to not only acknowledge, but also to honour their sacrifice.”

“Because they fought for their country - their land, as well as Australia.” Smoking the area, car and casket before entry into Raukkan community
Michelle Lovegrove

It's thought that around 800-1000 indigenous soldiers served in the Australian Imperial Force during WWI, with around 250-300 killed, even though they weren't regarded as citizens and were banned from enlisting.

“He was of legal age to enlist,” explains Lovegrove. “But as people may or may not know, Aboriginal men were not allowed to enlist.” “And so what a lot of these guys did, they said they were Maori, Spanish, or Islander. They were allowed to be all those things - they just couldn’t be Aboriginal.”

“So they just lied on their enlistment papers about their origin.”

Subsequently, the exact number of Indigenous men who fought during World War I is unknown.

"They said they were Maori, Spanish, or Islander. They were allowed to be all those things - they just couldn’t be Aboriginal.”

Lovegrove says that although she doesn’t know exactly what "lie" Mack told, if any, in order to be accepted, that it’s likely authorities would have played a part too, by simply turning a blind eye.

“When people see the very, very, famous photo – because so many people use it – of Uncle Miller,” says Lovegrove. “He was obviously an Aboriginal man – he was a black man.”

“I would imagine that it was quite obvious, but at that time, to put it bluntly, the army just wanted bodies – cannon fodder.” Although Miller may have been welcomed as an equal on the battlefield, he was not afforded the same privileges when he returned home, where, stricken with illness, he died and was not buried with the same honours as his fellow soldiers.

“He died and was buried in a pauper’s grave – only about 10 metres, believe it or not, from his battalion,” says Lovegrove.

“He was listed as a soldier, and when I turned up I thought that I would be walking to see him amongst his battalion and found that that was not the case.”

"I thought that I would see him [buried] amongst his battalion and found that that was not the case.” After 98 years, Private Miller Mack of the 50th Batallion finally rests on Ngarrindjeri Ruwe with his family and others he served with
Michelle Lovegrove

"War historians say, ‘there was no black or white in the trenches.’ But unfortunately it was very much black and white when they returned."

It was finding him buried in such a manner, decades later, that spurred on Lovegrove and her relatives – particularly her cousin, Francis Lovegrove, to pursue the case for re-interment with the Australian War Memorial.

“As so many war historians say, ‘there was no black or white in the trenches’ - they were all just mates.”

“But unfortunately it was very much black and white when they returned - which is why he ended up where he did.”

“Miller Mack was a Private in the 50th Battalion,” Lovegrove explains. “If you can imagine a young man brought up on what is now a remote community (and so at the time, was a very, very remote community) – surrounded by the country and fresh air.”

“He went from that to the horrors of war."

Lovegrove explains the journey that he then went on, "The 50th Battalion went to England to get trained first.”

For the young Aboriginal man from the bush, Lovegrove explains, that was already more than his immune system had ever been exposed to.

“At that point he was already getting sick,” she says.

“They were on an ocean liner for months, because they didn’t fly of course. He was already suffering coughs and colds and that sort of thing when he was training.

“They trained them in trench warfare because that’s what it was all about – being World War I.

“They sent them to France. He’d already been in hospital for a while, sick but they sent him on.

“He survived that – astonishingly. They lost almost 160 men in the 50th battalion in that battle." “After that, Uncle Miller became extremely sick – he had not recovered at all from his coughs and colds, etcetera.

“So in the trenches, he became extremely ill – to the point where he was unable to fight.

“He was evacuated in 1917 and sent to a hospital in England where he was diagnosed with severe bronchial pneumonia. He was diagnosed not long after with tuberculosis.

“They put him on a ship – so he had to go through all that again – and sent him back to Australia.

“Ultimately, he succumbed to tuberculosis and died and was buried in the place where we found him – many, many decades later.”

Lovegrove said that although the re-interment is groundbreaking, her family’s story is not unique.

“A lot of Aboriginal people have said to me ‘my relatives are lying in places where they shouldn’t be,’” says Lovegrove.

“And they fought! And they weren’t buried with their battalions as they would have been were they not Aboriginal."

“That’s the importance too,” she says. "When you have these instances where people are buried in places where they should not be buried – where they are not buried in culturally appropriate areas.”

Below: The Australian Army shared footage from the reinterment ceremony:

While, the significance may be important to the Indigenous community, Lovegrove explains that that has not necessarily made their two-year long fight to have Mack’s body moved any easier.

“It’s a long process,” Lovegrove explains, of how the re-interment came about. “If you ring up the War Memorial and say ‘I want to do this’, they are not going to say yes – not straight away, anyway.” "Repatriation is not just about overseas, it's also about here in Australia too,” says Lovegrove.

“My cousin Francis Lovegrove has done an enormous amount of work on this,” explains Michelle.

“In the negotiations it was put that he would be exhumed and then reinterred with his battalion.”

Centennial Park was also put forward as a suggested alternative.

“He’s going to go back to Raukkan where he lived and where he was happy and where his family was.

Photographs are courtesy of Michelle Lovegrove.