The Immigration Department has revealed that over 12,000 people have been in Australia for over twenty years after their visas expired.

More than 64,000 people are living in Australia illegally after having overstayed their visas, 12,000 of them for over twenty years, the Immigration Department has revealed.

The department captures the number of what it calls unlawful non-citizens on June 30 every year.

The number of people staying in Australia illegally was 64,600 last year as of June 30. The department said this year the number has remained “largely static”.

According to the figures disclosed to a Senate Committee, the Department of Immigration revealed that 12,080 people have been living illegally in Australia for more than twenty years. 6,670 people have overstayed their visas by 15 -20 years.

The department couldn’t provide an estimate of the number of unlawful non-citizens who are working in Australia. But it said of the 12,966 illegal non-citizens located in 2016-17, 1,756 were working illegally.

Commissioner of the Australian Border Force, Roman Quaedvlieg said their focus is on the facilitators of illegal labour hire intermediaries rather than individuals who breach their visas.

“We have involuntarily detained about 3,000 or so people in the field, but I should emphasise that our current priority focus is not on the individual visa holder, per se, unless they are particularly high risk,” Mr Quaedvlieg told the committee.

“What we have done over the last two years since the ABF was established was to start targeting the facilitators and the enablers of organised exploitation in the system such as labour hire intermediaries, migration brokers, offshore visa sponsoring houses, educational institution, employers et cetera.” 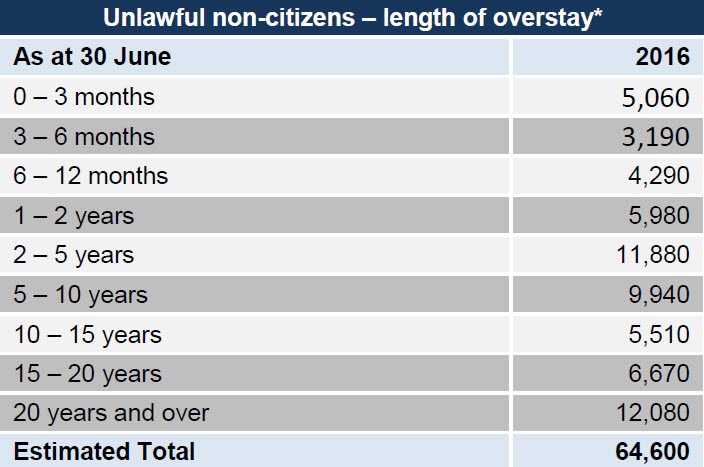 A DIBP chart giving an indicative breakdown of how many people have overstayed their visas by duration.
DIBP

The Department said its team of 193 field compliance officers are based out of the capital cities in Australia and conduct operations in all areas, including regional areas.

A vast majority of those overstaying their visas, a total of 47,000, came to Australia on visitor visas. Nearly 10,000 of those were on student visas.

Nick Xenophon Team Senator Stirling Griff said the long duration for which thousands of people have been illegally working in Australia makes a mockery of the border protection.

"Given that almost 20,000 illegal overstayers have been in Australia for more than 15 years, it makes a mockery of the border protection focus on so called boat people and their lack of Australian placement," Fairfax Media quoted him as saying.

Senator Griff said there should be better surveillance around those arriving on visitor visas.

"Most of these almost 65,000 would have travelled to Australia by air and the overwhelming majority have settled into Australian life, with little – if any – regard for our laws and responsibilities.

“At a time the Federal Government is overhauling the 457 visa scheme in order to protect Australian jobs, it should not be turning a blind eye to some 20,000 visa over-stayers who continue to work almost unchecked," Senator Griff said in a statement. 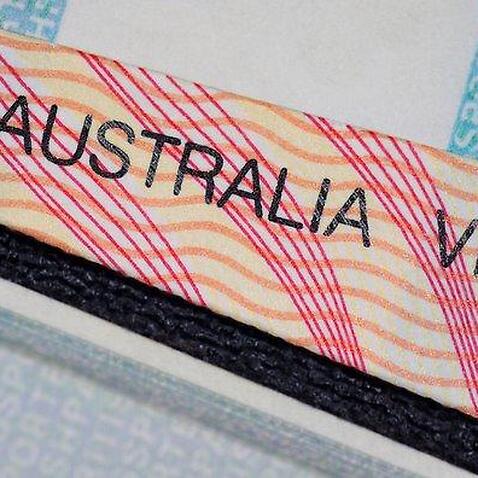 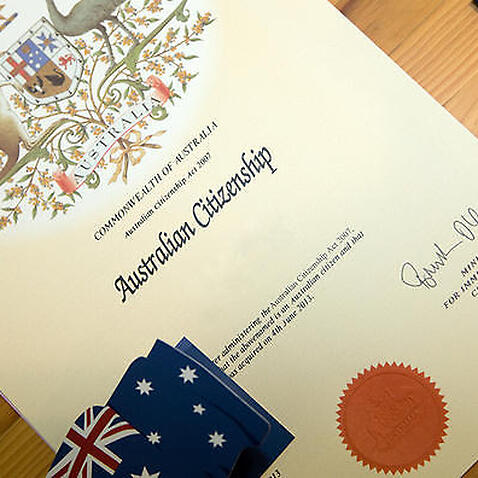