Whether it’s reporting suspicious activity, or being random breath tested, many of us will meet police in our day to day lives. However, for some new arrivals it can be a fearful experience, reminding them of corruption or injustice in their homelands. A new initiative called ‘Coffee with a Cop’ is trying to overcome old resentments towards police.

Having a casual chat with a member of the police, asking for directions or reporting something suspicious, is part of everyday life in Australia. However, many refugees, particularly from countries with conflicts in Africa, the Middle East and parts of Asia, see law enforcement agents in a very different light and are fearful when approached by local police on patrol. Catherine, a refugee from Iraq, admits that she always feels uneasy when seeing police.

“Scared, scared.  When we drive, when my husband drives and we see police, I tell him like drive good, no something wrong.”

Many refugees, says psychotherapist Charlotte Stapf, who has Iranian heritage, share this fear of police because of the injustices they have experienced in their former homelands.

“They can get away with a lot and so the population becomes scared of interacting with the police because it’s not a matter of being innocent and you be left alone. It’s more a matter of being able to pay the bribe and then maybe being left alone and torture can be definitely part of their playbook.”

Police in all states and territories know about the distrust many refugees and new arrivals have towards law enforcement agents.

In NSW, police is trying a novel approach towards bridging the gap. “Coffee with a Cop” is the brainchild of Police Superintendent Peter Lennon. His initiative has brought together about 50 refugees, community members, school students and police for an informal morning meeting at Fairfield Public School in Western Sydney.

“It started off in America, in 2011, and I heard about it from a friend in America, so I thought it would be a very good idea for Fairfield because of the Middle Eastern population that we got here to actually offer a cup of coffee which is a very strong message in Middle Eastern cultures – it’s an offer of friendship – and as well as that it is a way for us to meet with the community.”

And a friendly meeting it was with smiling senior officers mingling with the crowd, police hats being passed around freely for numerous selfies and colourful highway patrol cars available for inspection. Those who attended the meeting enjoyed it.

Apart from building bridges between police and refugee communities, the 'Coffee with a Cop' initiative  also offers an opportunity to inform the community about the rules and regulations that apply when police are called to an incident.

Assistant Commissioner Frank Minnelli is in charge of the Sydney’s south-west metropolitan region which has more than 140 different cultures. He says a common reason police interact with ethnic communities is when they’re called to investigate a large gathering of youngsters which can alert shop owners and other citizens. He says police officers can question anyone but like to do it in a friendly and amicable way.

If arrests are made, Assistant Commissioner Minnelli says, the person affected will be told their rights and if necessary, interpreter services will be involved for assistance.

“They’ll be taken back to the police station, particularly if they are juvenile under 18 years of age. They will be given an opportunity to speak to legal aid and get advice from a qualified legal practitioner prior to any interview be a police officer.”

In serious cases, the arrested person will stay at the police station over night before release.

“It depends on the actual charge. In the majority of cases you’ll find the person will be released on bail and will be given a date to attend court. But if it is a serious crime, a violent crime and there is also a fear that the individual could commit further offences, or that that individual might interfere with witnesses or evidence in that matter, then police will make an application to have bail refused.”

Assistant Police Commissioner Frank Minnelli acknowledges that some refugees, particularly those from war-torn countries, could have different attitudes to crime. Psychotherapist Charlotte Stapf says combined with a deep-rooted distrust of police, changing the mindset takes time.

“They can overcome their fears. I think that the longer they are here and they see the positive impact our police has and how polite they are and that they are trustworthy and honest the more they will come out of that state of fear. But it will take some time, that’s for sure, yes.”

‘Coffee with a Cop’ days have now been rolled out to police commands across NSW. 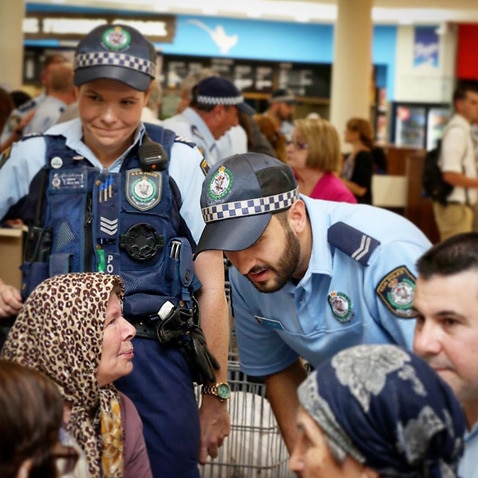 Settlement Guide: How to approach the police in your community