Many people change their names when getting married or divorced. Upon marrying, Melbourne resident Emilia Rossi chose to take on her new husband's surname.

Many people change their names when getting married or divorced.

"When you get married you get the marriage certificate. They ask you beforehand what name you want, so I had put my husband's name because that's what I wanted. So then what you need to do is contact Births, Deaths and Marriages and you need to get yourself a change of name form. One of the reasons that you have to tick is because of marriage that you're changing your name."

However she then decided to go back to her maiden name.

You need to contact the Registry of Births, Deaths and Marriages and get a change of name form.

"But then, my husband and I separated and then basically I wanted to change my name back to my birth name, so you do all those steps in reverse.  I had to contact Births, Deaths and Marriages and I had to apply for that change of name and then there's a little part where it says why, and I had said separated and divorced."

State and territory governments are responsible for the registry of births, deaths and names of residents. They see many reasons why people want to change their name. NSW Registry of Births, Deaths and Marriages' Assistant Registrar Ben Finn explains.

Some people may be changing their name to escape domestic violence or start afresh and have a new life.

"They may be changing their name to escape domestic violence or start afresh and have a new life. Somebody might have been born with a name like Giovanni and then have used an Anglicised version of that name such as John throughout their life and then when they go to apply for a passport the organisation might turn around and say we require a change of name to establish that Giovanni and John are the same person; or it may be difficult to pronounce, it may have other associations that they feel are connected to that name."

Some people change their name to avoid discrimination against their ethnic background.

"So they may feel more comfortable in changing their name to something that they feel may be more readily accepted throughout Australian society, which could be unfortunate in certain circumstances, but obviously we understand that people are in this situation sometimes."

The NSW Migration Heritage Centre says at the outbreak of World War One many German families in Australia changed their names to stop harassment from the government and community. Having a multicultural name is currently a concern for some people seeking work. The Australia@2015 Scanlon Foundation Survey reported experiences of migrants who felt their job applications were rejected solely on the basis of ethnicity and assumed religion.

The Australia@2015 Scanlon Foundation Survey reported experiences of migrants who felt their job applications were rejected solely on the basis of ethnicity and assumed religion.

Participants said after not getting a response to a job, they anglicised their name and received responses with the new name. The Victorian Government is addressing the issue of discrimination in the job market through an 18-month anonymous resumes trial called "Recruit Smarter". The pilot initiative aims to stamp out workplace hiring biases by omitting personal details, including the applicant's name. Victoria's Finance and Multicultural Affairs Minister Robin Scott says people in the job market can be prejudiced against a person's name without realizing it.

The Victorian Government is addressing the issue of discrimination in the job market through an 18-month anonymous resumes trial called "Recruit Smarter".

"I think we all make judgements about others so there's very strong evidence we all have unconscious biases and unfortunately that affects some groups more than others and it's very interesting because I know this from my own personal experience that my wife had exactly this experience. She's from a Chinese background and when she changed her name on job applications to a more Anglo name, she was receiving more job interviews. And when she went to the interviews herself she didn't feel she was being discriminated against, so it's sometimes a bit of a subtle process."

Victoria's Multicultural Minister Robin Scott admits that changing your name to improve your job prospects should not be happening.

"So it's a big thing for someone to change their name, it's not a flippant decision in many cases and it shouldn't occur but I think by highlighting the issue and looking at what we can do to address it, hopefully over time we can reduce the incidences of bias but also ensure that less people would have to change their name into the future."

And he says it's important for the job market to develop an attitude of non-bias towards the diversity of names in Australia.

"I've met many people, when discussing this issue, as a Minister for Multicultural Affairs, who had exactly this experience and it's something that they didn't want to do, but they felt they needed to do and as a society I think ultimately we should look to how we can do better to ensure that people have fair opportunities in the labour market and can live true to the values we espouse as a multicultural society."

If a person wishes to change their name in Australia they must lodge a legal name change application form with Births, Deaths and Marriages in their state or territory. NSW Assistant Registrar Ben Finn says those who are over 18 and eligible can apply but rules change across the country.

Different states have different laws and different requirements for their change of name.

Requesting the name change can be done in person or online.

"The first thing they can do is either come into the registry or go onto the website and on the website the change of name form is available where they can actually complete it on their computer or they can print it and complete it with a pen. They then fill out all the questions on the change of name form, or they can come in and visit us and do an interview. But they'd have to book an interview and that might take a week or two or perhaps even longer."

But not all applications for a change of name are approved.

"For instance we also have a requirement that a name can't be changed more than three times by the same person or can't be changed more than once in a 12 month period. There is the ability to have an exemption, but that exemption needs to be approved by the Registrar. Also if they try to change their name to a name that's prohibited or offensive then we can also reject that change of name application. Also if a person is on a restricted person's list due to legal issues."

For an application to be considered the person must provide specific reasons for wanting to change their name.

For more information on how to apply for a change of name contact the Births, Deaths and Marriages Registry in your state or territory or visit the Australian Government's website. 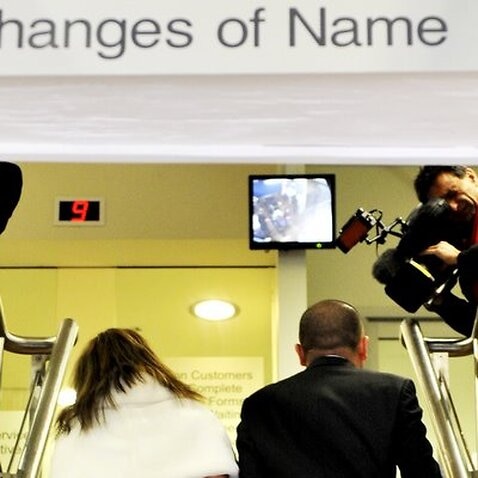