In Australia, 90 per cent of eligible students take up a loan to pay for university study. The federal government administers different loan schemes to assist students with their fees.

For university students, a three-year undergraduate degree costs about $32,000 or up to $60,000 for medicine.
Andrew Norton is the Higher Education Program Director at the Grattan Institute. He says students at universities or at an approved higher education provider are offered either a Commonwealth supported place (CSP) or a fee paying place.

The Higher Education Loan Programme (HELP) consists of five loan schemes. The main one is HECS-HELP. Under HECS-HELP students who are Australian citizens can borrow money from the government for their higher education. Andrew Norton says HECS-HELP is the most popular loan in Australia.

"Virtually all undergraduates in Australia universities are eligible for HECS-HELP, which sort of permanent resident being the only major exception. And of those who are eligible about 90 per cent take up their loan. So this is by far the most popular kind of loan. And if you are an undergraduate it's pretty unlikely, you'll have any loan except that."

There are four other loans available to assist students.

"Then there is another scheme called FEE-HELP, and that applies to students who are on full-fee places, and that's mostly post-graduate courses, or courses in private higher education providers. SA-HELP is to pay for your student amenities' fees, so each university charges about $300 for extra non-academic services. OS-HELP is if you want to do a semester overseas in a foreign university, OS-HELP pays for that. And VET-FEE HELP is something that applies to diploma level courses in vocational education."

All Australian permanent residents and citizens can have a Commonwealth supported place, but only citizens are allowed to take out a HELP loan.

There is no age restriction on any HELP loans and students can keep taking out HECS-HELP loans through their entire life if they want to. With FEE-HELP there is a maximum debt about $100,000. All Australian permanent residents and citizens can have a CSP but only citizens are allowed to take out a HELP loan. Andrew Norton says permanent residents pay upfront fees depending on what they study.

Humanitarian entrants can access HELP loans, but not other visa holders.

Andrew Norton from the Grattan Institute says humanitarian entrants can access HELP loans, but not other visa holders.

The Government's Study Assist website warns students that they have until census date to confirm their enrolment in their subjects. Andrew Norton says census date is the date which students actually become liable for their debt.

Students could also receive ongoing payments to assist with cost of living.

"Youth allowance applies for young people up to age 24. Fairly complex eligibility, but generally people whose parents earn up to $150,000 can get at least some youth allowance. Not necessarily the whole amount, and so that can be a valuable assistance to people who are seeking to go to higher education. Generally most students also work, so it's a combination of your own income and youth allowance."

Currently students can pay part of their fees upfront and receive a 10 per cent discount.

"In theory universities can charge any price up to a legal maximum, but in practice they all charge the legal maximum. So they are all the same. For a Commonwealth supported place, effectively you pay the same amount whichever university you attend."

Currently students can pay part of their fees upfront and receive a 10 per cent discount. However, the discount will be abolished from 1 January 2017. Andrew Norton predicts some loan rules will change. For example, from 2017 students who move overseas will have to pay back their loans.

"So it's one important change for a migrant who might return to their home country. The other potential change is that, at the moment you don't have to repay unless you earn $54,000 a year. In the recent past the government has suggested that it should be lower, so it's possible that in future that threshold for repaying will be a lower annual income that it is now." 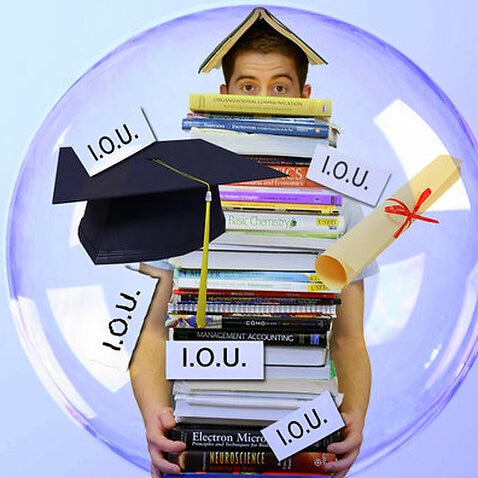