Australians go to the polls to vote in the federal election on July 2. Voting is compulsory for all eligible citizens over 18. Voters must be enrolled with the Australian Electoral Commission. Once registered, they must vote on election day to avoid penalties.

Voting is compulsory for 15.5 million Australians aged over 18 who have lived at their current address for more than one month. The Australian Electoral Commission, or the AEC, is an independent statutory body which facilitates the election process.

Those registered must vote or be penalised.

AEC spokesman Evan Ekin-Smyth predicts that close to 950 thousand potentially eligible voters won't be able to vote because they fail to enrol. He says those registered must vote or be penalised.

"If anybody who is enrolled and doesn't turn up to a polling place to cast a vote, they could be issued with what we call a non-voter notice. If you have a valid reason, that's fine, you just let us know. But otherwise you have to pay the $20 fine. And if we don't get a response from that non-voter notice, it could end up in court with a $170 fee and associated court cost."

You need to update your personal details on the electoral roll.

If you are already enrolled to vote, but have recently changed your name or address, you need to update your personal details on the electoral roll.

"We live in a great democracy in Australia. And there are a lot of countries around the world where people fight very very hard to have their vote. In Australia, we have easy access to our vote. All you've got to do is be enrolled by the deadline which is 8pm 23rd of May and then turn up to a polling centre on polling day."

In Australia, we have easy access to our vote.

Federal elections are held every three years to determine members of the House of Representatives, who serve a three-year term, and members of the Senate who serve a six-year term. Traditionally, half the Senate is elected every three years. However, this double-dissolution election means all seats are being contested. That's 150 seats in the House of Representatives and 76 in the Senate. The AEC's Evan Ekin-Smyth says it's the seventh double-dissolution election since Australia became a nation in 1901.

Double-dissolution election means that you're electing double the amount of senators that you would normal elect at what we call a standard election.

"Double-dissolution election quite simply means that you're electing double the amount of senators that you would normal elect at what we call a standard election. And that's in the states. So in all the states at a standard election which is a half senate election, you elect six senators for each state and two for the territories. For a double-dissolution election, the entire senate is dissolved so that means there are vacancies for twelve senators per state and still just two for the territories."

Candidates are elected by a preferential voting system.

Voters at 8000 polling stations across Australia will be given two ballot papers. The green ballot paper is to elect a local candidate for the House of Representatives. While, the white ballot paper is for electing a senator from their own state or territory. Candidates are elected by a preferential voting system. Evan Ekin-Smyth explains how this works.

"So Australia's system of preferential voting essentially aims to make your vote go further. So if you're numbering like on the House of Representatives ballot paper, you need to number all the boxes. If the person you vote for as number one is struck out of the count, then your vote will flow onto your next preference and so on, until it is counted towards a candidate."

On the white Senate ballot paper voters can either mark their preferences by party above the line, or number their preferred candidates below the line.

Voting on the white Senate ballot paper is slightly different. Voters can either mark their preferences by party above the line, or number their preferred candidates below the line.

"You still have to number at least 1 to 6 above the line if you're voting for parties or groups or 1 to 12 below the line if you want to vote directly for candidates. It's very important that the people who are elected make decisions that'll affect your local area or your state or territory. So do a little bit of research and get out and cast an informed vote."

Voters who cannot attend a polling place on election day can vote in other ways.

"If a polling place is over 8 km away or you have a barrier to voting on election day, there are early voting centres in the weeks leading up to polling day. And likewise, if you're unable to get to an early polling centre, you can cast a postal vote as well."

For overseas voters, ballot papers must be completed and posted back to the AEC on or before election day.

"If you're overseas, we do provide overseas voting centres at most Australian High Commissions so you can go to aec.gov.au/overseas to see those voting locations. If you can't get to one of those, you can apply for a postal vote now and we can try and get your postal vote to you. However, we understand there are people who are in circumstances who are unable to get a postal vote or get to one of the voting centres. If that's the case, then that's a valid reason for not voting."

Ballot papers filled out incorrectly are deemed invalid. If unsure, voters can approach officials at the polling centre for assistance. Major parties often hand out how-to-vote cards outside polling centres. However, Evan Ekin-Smyth says, it's important not to be misled about how to vote.

The AEC provides voting instructions in 26 languages at polling places across Australia.

"Party workers often will be at the polling place you go to handing out cards, telling you how to cast your vote. This is an instructional piece only. Your vote is your vote. You don't need to follow anybody's instruction as to how you vote. This is simply an instruction for if you are a supporter of a particular political party, this is how they suggest you vote. Make sure you cast a vote according to who you want to vote for."

The AEC provides voting instructions in 26 languages at polling places across Australia. However, voters with language barriers can ask to be accompanied by an assistant.

"If you need assistance to cast your vote, yes, you can get somebody to assist you to cast your vote. That's allowed for in the legislation. We actually have an interpreting service via telephone that you can access. If you think you'll need to access these sorts of services, there's a number on our website you can access via aec.gov.au/translated. You call up that number and you'll be able to ask questions and have somebody in language instruct you as to how to cast your formal vote."

Polling places will be open from 8am to 6 pm on election day. The AEC expects approximately one million voters per hour throughout polling places across the country.

Polling places will be open from 8am to 6 pm on election day. The AEC expects approximately one million voters per hour throughout polling places across the country. Once voting ends, the ballot papers are counted by polling officials who are observed by scrutineers* nominated by the candidates. Results for the House of Representatives are determined on election night, while the Senate count may require several weeks to finalise due to the complexity of the voting method. The party which wins more than 75 seats in the Lower House forms government.

To find out how you can enroll to vote, go to the Australian Electoral Commission website or ring 13 23 26.
More information on how to vote in your language and specific voting details.
*scrutineer - a person who supervises the conduct of an election 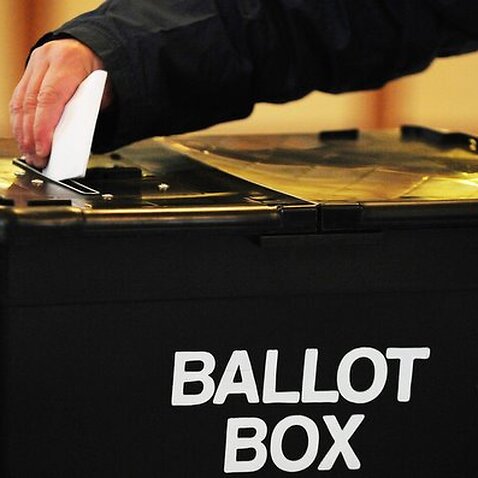