Husband-and-wife Chefs Jay and Kim Prieto are proof that in as much as cooking transforms ingredients, it too pushes the cook to evolve.

"[Kim and I] emphasise simple traditional Filipino food; but when you study all the aspects of our cuisine, you'll discover all it had to go through to evolve to what it is now," Jay Prieto shares.

In as much as the cuisine they hold dear has evolved throughout time, Jay and Kim Prieto have undergone transformations as chefs, restaurateurs and partners in and out of the kitchen.

From students to migrants

Bicolano Jay met Laguna-native Kim in 2003 while they were both studying in the Centre for Culinary Arts (CCA) Manila. As culinary students, the two were sent to Australia for apprenticeships in both the Grand Hyatt Hotel in Melbourne and the Grace Hotel in Sydney.

After their apprenticeships, the two went back to the Philippines to gain more kitchen experience. But while the tandem settled into their lives back home, Australia was never far from their minds. In 2008, the Prietos decided to migrate to Western Australia. Jay and Kim’s love story began in 2003 when they were both culinary students in the Center for Culinary Arts (CCA) Manila.
Kim Cudia-Prieto

"Our time in Western Australia was very different from our experience in Melbourne and Sydney. It was a lot more laid-back," Jay admits.

While the couple slowly got used to the more laid-back life in Western Australia, another milestone would push them to opt for another change.

"We had a child - a cheeky and beautiful little girl named Lexi. When I gave birth to Lexi, we thought of moving to Canberra because we heard that it was a good place to raise a family. We wanted her to grow up here," Kim shares. Lexi has been influenced by her parents' love of food and cooking.
Kim Cudia-Prieto

Jay agrees, adding, "It was 2014. During that time, from what I remember, the Lonely Planet said that Canberra was one of the best places in the world to live in."

It was in Canberra that the family held Lexi's second birthday celebration. The celebration unexpectedly led to a new venture for the Prietos.

"I thought of making ensaymada for Lexie's birthday. The guests loved it," Kim shares, adding, "One guest ordered four dozens from me. After that, word spread about my ensaymada throughout the Filipino community." 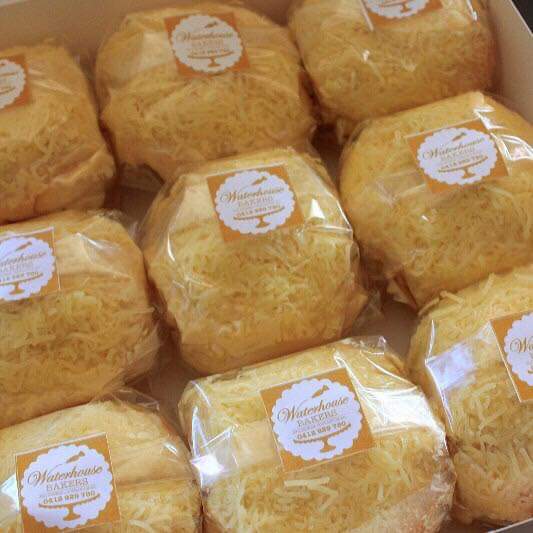 It all started with ensaymada.
Kim Cudia-Prieto

Jay shares that they baked ensaymada and made deliveries during their days off from work.

Following the popularity of their ensaymada, the couple decided to add more Filipino baked goods to their offering such as sansrival, pan de coco and ube leche flan.

"We realised there were a lot of Filipinos in Canberra craving for Filipino goodies; so we decided to get a stall in one Sunday market in the city," Kim shares. Jay adds, "We called our home business 'Waterhouse Bakers' because we lived in Waterhouse Street then."

From running Waterhouse Bakers, Jay and Kim didn't expect to establish a full-fledged food business right away, but the call for Filipino food was too strong to disregard.

"We saw how much Filipinos missed Filipino food, so we decided to open a food truck - a 20-ft shipping container in one of the container villages here in Canberra," Kim shares.

With a changing weekly menu of sweet and savoury Filipino dishes, Jay and Kim named their food truck 'Lolo and Lola' ('Grandfather and Grandmother') after the most influential culinary figures in their lives. In as much as Jay considers his grandfather to have sparked his love for cooking, Kim says her grandmother taught her how to cook from the heart.
Kim Cudia-Prieto

Jay's grandfather was known in their town for making delicious fiesta dishes from scratch.

"He started with slaughtering a pig in the morning and, then I would see him make a lot of dishes from just one whole pig. I wasn't allowed to help when I was young, but I would watch him. As I got older, I was allowed to help. I learned a lot from him," Jay shares.

Kim, on the other hand, credits her grandmother for teaching her intuitive cooking.

"This was our way of giving respect and paying homage to all our grandparents who passed down their traditions to us. There's always a feeling of warmth, comfort and love that goes with remembering our grandparents. When we think of them, we think of home," Kim shares.

The feeling of home certainly radiated in the four corners of their food truck, with the spouses working side by side.

"We both have strong personalities and our own way of doing things," Kim laughs, adding, "We fought a lot in the beginning; but working together all the time meant we didn't have the luxury of being mad at each other for long." "We fought a lot in the beginning; but working together all the time meant we didn't have the luxury of being mad at each other for long."
Kim Cudia-Prieto

Jay agrees, saying, "Friction in a kitchen environment is normal. The nice thing about working with your spouse is that you understand where he or she is coming from from both a professional and personal level."

When the container village that housed their food truck closed down, the couple sought a more permanent space for their eatery. In 2017, the couple opened the Lolo and Lola restaurant in Watson and, brought in a new business partner, fellow Filipino and CCA alumnus, Pastry Chef Christina Uy.

"The great thing about our training in CCA was that the three of us are culinary-qualified chefs. We have experience with different responsibilities in the kitchen so we all have a hand in the entire operation," Jay shares. 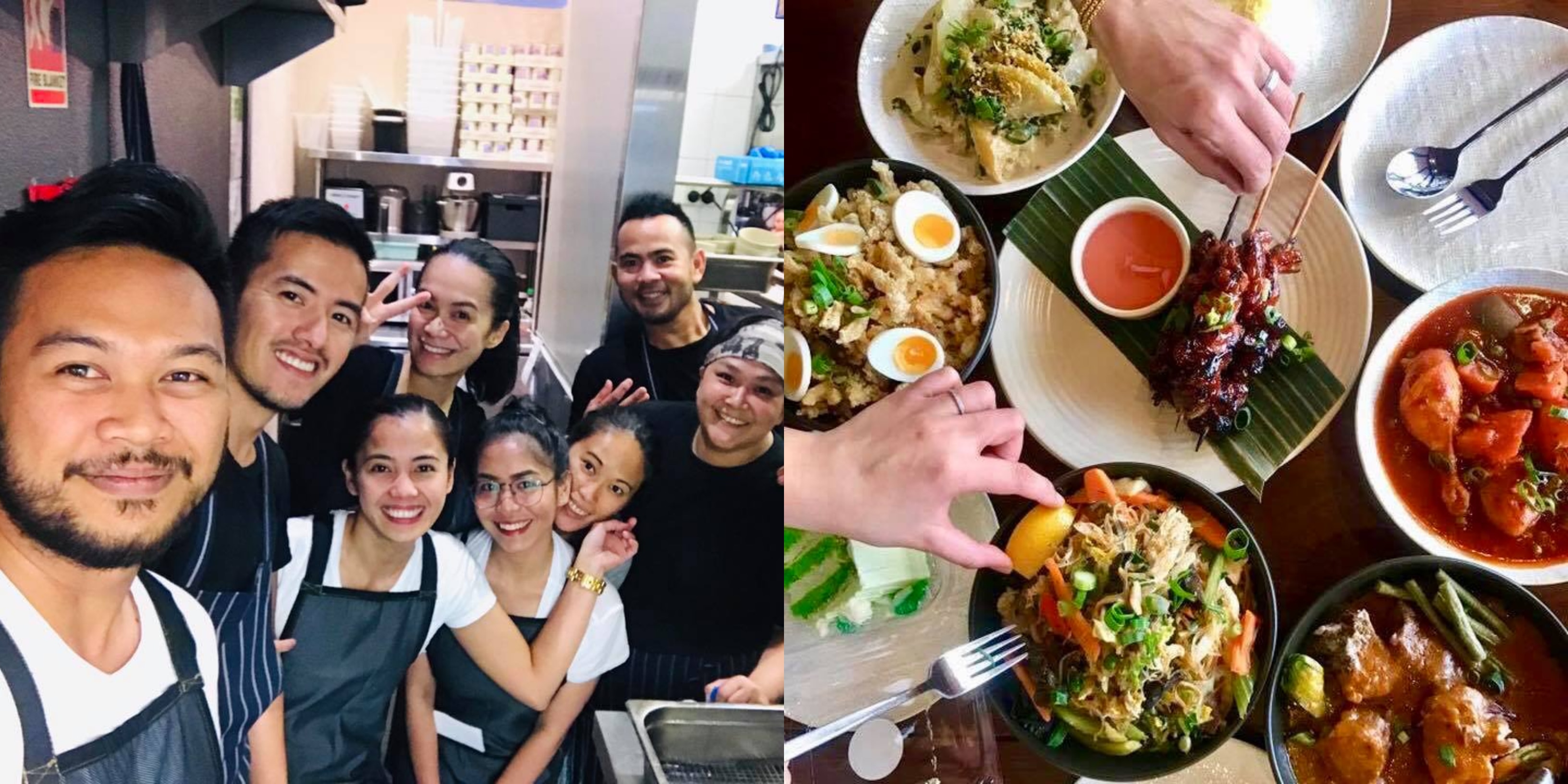 Aside from having the same culinary training, what the chefs have in common is their love for honest-to-goodness Filipino food cooked in the traditional way.

"Our advocacy is to promote Filipino food as it is. No shortcuts. No modifications, For example, we cook papaitan  (soup with innards) the traditional way and we still use tuwalya (tripe)," Kim shares, adding, "For me and Jay, Filipino cuisine is already fusion. It's a fusion of Spanish, Chinese, Indo-Malay; so there's no need to complicate it even further."

Jay agrees, sharing that Filipino food is not only vital to him being a chef, but is a huge part of what defines him as a person.

"No matter where we are in the world, we never forget the food we ate even before we became chefs. My history with Filipino food is what makes me different from other chefs around the world. All my memories of food has shaped me into the chef and person I am today." "Be true to yourself. Stay true to your traditions, to your culture and to your roots."
Kim Cudia-Prieto

Throughout their evolution as chefs, restaurateurs and, partners in business and in life, the Prietos have stayed true to the fundamental reason for their success - authenticity.

As Kim so aptly puts it, "Be true to yourself. Stay true to your traditions, to your culture and to your roots." The RICE of Chef Ross Magnaye