Forget the Socceroos and Matildas, Australia now reigns supreme in a world football tournament where player intelligence is artificial, but victory is very real.

Researchers from the University of Sydney and CSIRO Data61 took part in RoboCup, an international robotic soccer competition, and they won the 2D Simulation League with their software, or 'team', Fractals.

In a combination of footballing passion, coding and complex systems, they conquered a field of 15 international teams from the likes of Brazil, China and Germany.

After their victory, Prokopenko told SBS Russian about the significance of RoboCup.

“It’s a prestigious event and the competition is quite tough with 15 teams from around the world. It shows the levels of the AI and robotics research and you can compare those developments in the science across different labs.”

It’s the second time Australia has taken the win. RoboCup goes to University of Sydney
Provided by Professor Prokopenko

The annual competition started in 1996 and the number of the participating teams has steadily grown resulting also in technological advances in autonomous decision making.

As opposed to a computer game, RoboCup's Simulation League sees fully autonomous teams compete, relying on coding done by the research team. This means that once the game has begun, the computer scientists sit back and watch their teams duke it out on a big screen in real-time.

The entertainment portion of the competition is strong, as researchers cheer for their players and aspire for the win just like in any major tournament.

Even on the two-dimensional screen, diversity shines through, as Prokopenko says each team cheers differently.

“We all sit in front of the big screen where all the action comes live and we literally cheer. All teams display it differently. For example, the Japanese researchers are quite reserved, everything [emotions] happens ‘inside’. The Iranian team is very emotional and you can see straight away what’s going on for them.” 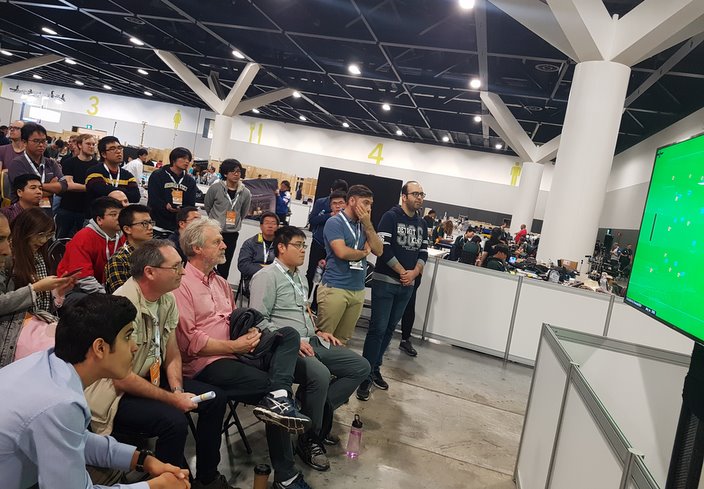 Professor Prokopenko says the playing style of a researcher's country of origin can be reflected in the virtual field too, with a variety of styles and strategies taking place.

“Depending on the research focus the football team would be imbued with specific style and attributes. Someone prioritises the navigation, someone the visual processing, sensor or communication abilities.

There are teams who play more like Chelsea, or like Dinamo Kyiv attacking from the wing, or those who play hard on defence and play on counter-attacks. Our rules are identical to FIFA’s with offside, corner shots, penalties."

Although gender diversity in sport is a hot topic, it’s hardly reflected in digital football where a digital player has zero gender.

“Generally, all players have the same abilities but before the game begins, the players are randomised. Some would run quicker but will get tired quicker too, some hit the ball not as precisely, some have smaller feet size", says the professor, explaining that the big focus is on squad tactics and not individual qualities.

Back in the real world, though, RoboCup is encouraging more female researchers to take part in the competition by establishing The Silvia Coradeschi RoboCup Award, honouring the late professor Silvia Coradeschi who was a frequent participant and respected academic.

Professor Prokopenko is a veteran of the competition, partaking in it for almost 20 years and, being a football fan, he admires both the practical and the entertainment aspects of RoboCup.

“It’s a great way to assess research progress, which is often a problem in the academic field. While here, sooner or later the squads meet and one of them will eventually win.”