The death of a Hazara protester in Indonesia has devastated members of a large group of refugees who are demanding action on resettlement, though their calls are increasingly being met with threats and violence by local authorities.

This article contains references to self-harm.

The 37-year-old  was one of more than 13,000 refugees in Indonesia - the majority of whom are Hazaras from Afghanistan - who have been staging demonstrations against their conditions in the country, which has seen some sew their lips together in protest.

The demonstrations, which have been ongoing for months outside the UN refugee agency (UNHCR) and International Organization for Migration (IOM) offices in several Indonesian cities, are demanding urgent action regarding the resettlement of this cohort into other countries and to provide better work rights, access to education and the easing of travel restrictions.

The calls have led to a campaign to end '10 years of limbo' for the group, which has called into question Australia's asylum seeker policy. Sayed Nader Balkhi took his own life on Saturday.

Mr Balkhi is survived by his wife and five children, and his death has left his family "devastated", his cousin Sayed Abbas Alavi told SBS Dari.

“Basically, I am still in shock and can’t believe that such a thing could have happened to him,” said Mr Alavi who flew in from Bogor after hearing the news.

“To this moment, I can’t believe that Sayed Nader could have done such a thing and as I sit down and talk with friends, I feel that at this moment Sayed Nader might open the door and come in.

“But, unfortunately, this is something that has already happened, and he ended the miserable life that he had here, and we have, he couldn’t bear it.” Sayed Nader Balkhi (central left) was active during the refugee rallies in the past few weeks.
Supplied/Hassan nazari

Mr Balkhi travelled to Indonesia with his wife and children to seek asylum after fleeing Afghanistan in 2017.

Only the oldest child, aged 12, knows about his father’s death and understands the situation they are in, Mr Alavi said.

“I haven’t been able to have a proper chat with his wife so far, because when she sees me, she says a word or two, and she passes out. She is in very bad shape."

'Our cries and moans get nowhere'

Friends and family said Mr Balkhi was "very active" during the rallies and always advised others to stay positive and keep up the struggle for resettlement.

His death comes amid the growing use of force by local authorities against the refugee protesters. In a video obtained by SBS Dari of protests in Batam city on Sunday, a man who appears to be an IOM guard threatens protesters that he will call “gangsters" if they do not stop the demonstrations.

In another video, police are seen beating protesters with batons, leaving at least one refugee severely injured. His condition is not known.

Dozens of Afghan refugees were subjected to violence during forced dispersal by Indonesian police today (17/1/22) in Pekanbaru.

They were protesting in front of the @UNHCRIndo office following the suicide of an Afghan refugee yesterday.

They are all desperate for resettlement. pic.twitter.com/NiLhZctoAR

Karim Alizada is one of the dozens of Hazara refugees who have been living in the same hotel as Mr Balkhi for several years.

He said Mr Balkhi’s death has taken a toll on the 20 families living in the hotel in Pekanbaru, the capital city of the Indonesian province of Riau.

“There is too much stress. Our cries and moans get nowhere,” he said.

“The fact is that we are not in a good situation. I myself have been living here for eight and a half years, if you ask me about my mental situation, it’s zero.”

Some members of the refugee cohort have been in Indonesia for up to 10 years, with many fleeing their countries to seek refuge in Australia.

In 2013, the Australian government under the Labor Party announced that no asylum seeker who arrived by boat would be resettled in Australia.

Then in 2014, the Coalition government went further by banning any refugee and asylum seeker who registered with the UNHCR in Indonesia from being resettled in the country. 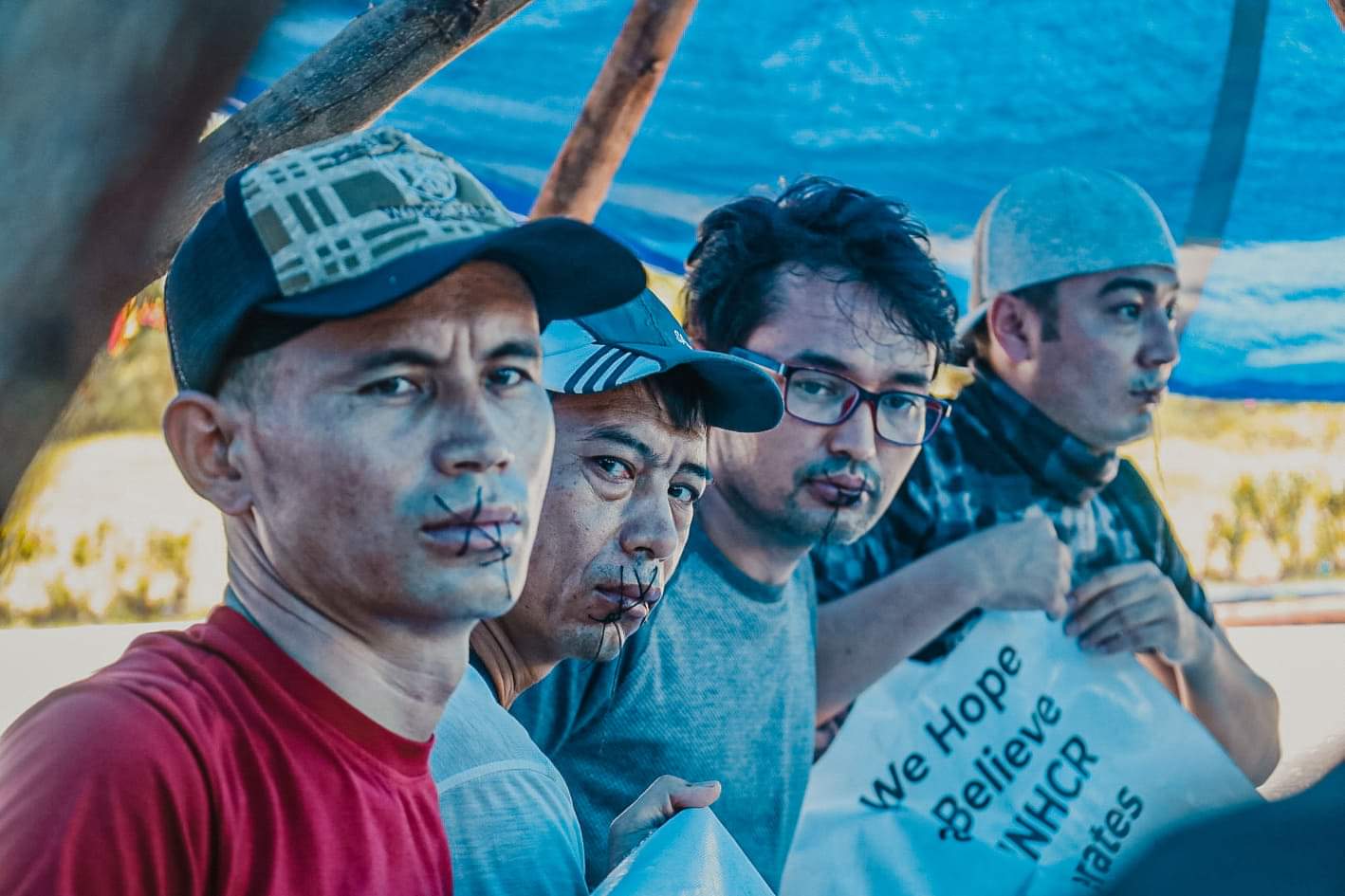 Hazara refugees sewed their lips in an attempt to get the world's attention.
Supplied/Hassan Nazari

Mr Alavi said Australia’s “filthy” refugee policies and the "triangle" of Australia, UNHCR and Indonesia were to blame for their dire situation in Indonesia.

“The cause of these problems and suicides is 100 per cent [due to] Australia’s policies towards refugees in Indonesia,” he said.

Fourteen refugees have reportedly taken their lives since 2013, 13 of whom are Hazaras.

Under a bilateral agreement, the Indonesian government has agreed to intercept and detain asylum seekers bound for Australia.

Mr Alizada also blamed the Australian government for the current situation, adding that if the UNHCR and resettlement countries don't address the crisis, it will lead to a “disaster”. When contacted by SBS Dari in December, the Department of Home Affairs didn’t directly address questions on the issue of refugees in Indonesia, but said, “transitory persons in regional processing countries or temporarily in Australia have durable migration options and are being resettled”.

“The Australian government is working to ensure that visa options continue to be available to eligible Afghan nationals, through Australia’s long-standing Humanitarian and Migration Programs,” a spokesperson said, stressing that Australia’s policies on border protection and combating people smuggling remained unchanged.