A small refugee community in Victoria, that has itself experienced the pain of losing everything, has dug deep to raise almost $160,000 for their 'brothers and sisters' in the bushfire-ravaged areas of the state.

Victoria’s Hazara community has donated almost $160,000 to the state’s bushfire relief efforts and offered up its members who have tradie skills to help rebuild communities hit by the devastating fires.

Community members told SBS Dari that they felt very close to the stories of bushfire survival, that they couldn’t sit back and watch the affected communities suffer. Community leaders and businessmen presented $22,543 of the fund to the CFA .
SBS Dari

They said they “owed Australian society a lot” as they presented the money to the Country Fire Authority (CFA) and Gippsland Emergency Relief Fund (GERF).

“For the Hazaras, it has always been about survival, we’ve come from a country that has been ravaged by war, and as a result, we understand the pain of [our] brothers and sisters in the bushfire ravaged communities,” said Rayan Rezaie, a member of the Victorian Hazara Community Bushfire Appeal’s executive committee.

Mr Rezaie said the community response to the fundraising campaign was “overwhelming and heart touching” and show their “sense of responsibility” to the country that offered them asylum. The relief efforts were the first steps made by this community. Some members are keen to take it a step further by offering their tradie skills in the reconstruction efforts, Mr Rezaie said.

“After fleeing war and persecution from Afghanistan and Pakistan, Australia became our home. Regardless of our visa status, this money has been raised by the Australian Hazara citizens, refugees and asylum seekers who also contributed in fundraising campaigns,” said community leader Sadia Ali. Ms Ali also announced they’re working with the other communities to arrange a multicultural food and music festival to raise funds for native animals.

Australia has ‘honoured our dignity’ Ahmad Rezaei said as Australians have “honoured our dignity” in the past, the Hazaras should always remain grateful to them.
SBS Dari

Senior community member Ahmad Rezaei said as Australians have “honoured our dignity” in the past, the Hazaras should always remain grateful to them and give back as much as they can.

“Let’s remember that we are the people who put their children in boats because the water was safer than the land,” he said.

“We started to immigrate to Australia only about 20 years ago and now we’re having what we could hardly imagine we would ever have. Refugee advocate and human rights activist Veronika Quinton said the Hazaras’ lives have always been on survival mode for many, many generations.
SBS Dari

“We really, really owe Australian society a lot, yes, we must remain grateful to them and it’s our responsibility to give back as much as we can, not only at this time of hardship but at all time.”

Minister for Local Government and Small Business Adem Somyurek thanked the Hazara community for its support. “On behalf of the Victorian government and indeed on behalf of the people of Victoria, I would like to take this opportunity to express my heartfelt gratitude to the Victorian Hazara community for their generosity and their community spirit in digging deep in raising so much money, much needed money for the victims of the horrendous bushfires that we’re experiencing,” he said.

“You, the Hazara community put aside your own personal pain and tragedy and some of the settlement issues that you’re experiencing, and you’ve done all of that to ease the pain for fellow Victorians who are actually at the moment being dispossessed, homeless and displaced.” Victorian upper house member for Eastern Victoria Region Melina Bath, a sixth-generation Gippslander, said the Hazara community had reached out in the “most magnificent way” to people who have been hurt by the devastating bushfires.

She invited the community members to visit the bushfire affected communities in East Gippsland to see the effects of fires firsthand and see where their funds would go. 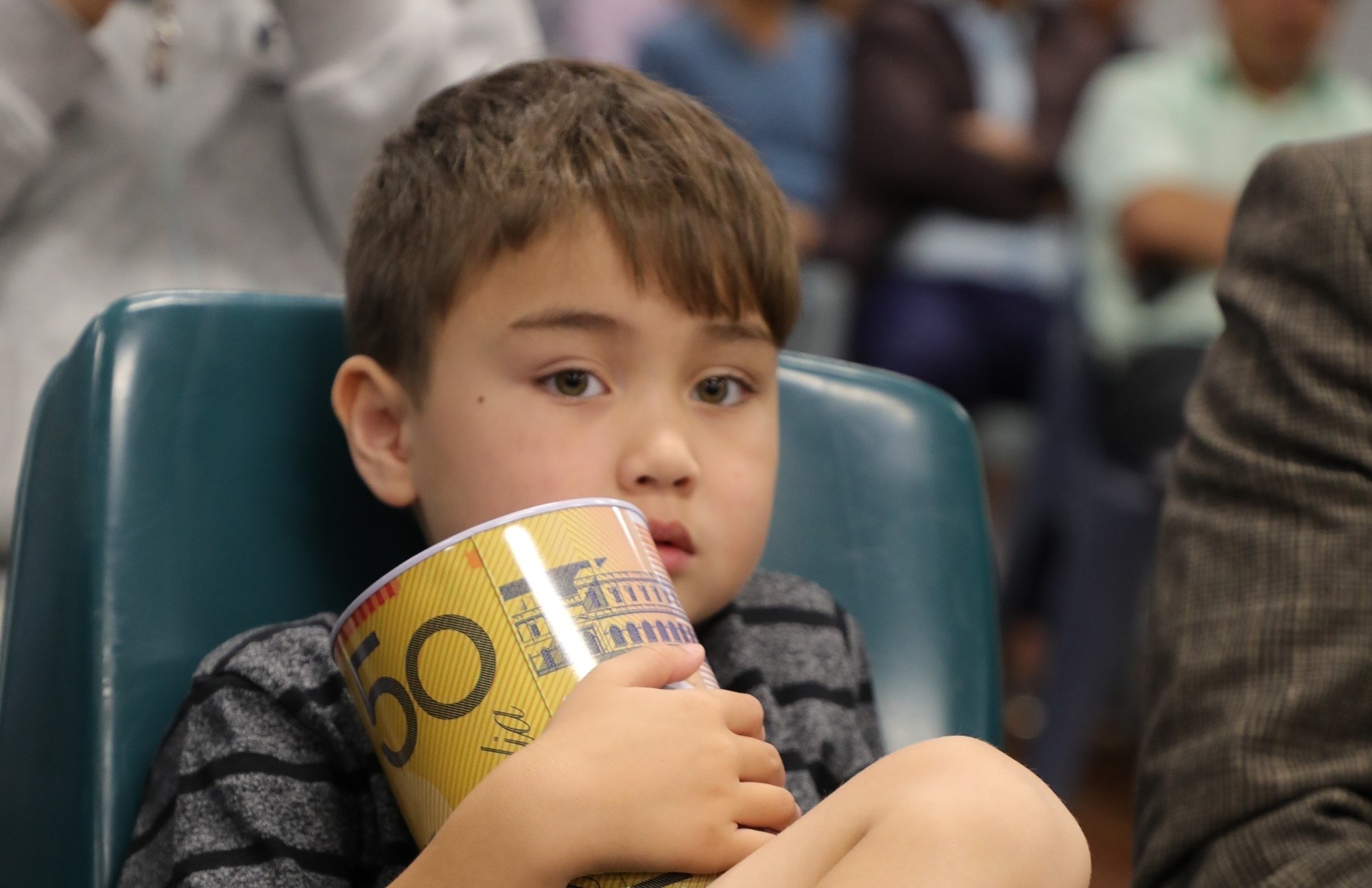 A young boy attended the event to donate what he had in his saving tin.
SBS Dari

Community leaders and businessmen presented $22,543 of the fund to the CFA and $133,477 to Gippsland Emergency Relief Fund in an event attended by hundreds of community members on Thursday night.