As the controversial anti-Islam activist Ayaan Hirsi Ali cancels her Australian tour at the last minute, citing security concerns, a group of Australian Muslim women have released a new video stating that, "You don't speak for us."

The speaking tour of the Somali-Dutch outspoken critic of Islam, Ayaan Hirsi-Ali, organized by Think Inc. was scheduled to start this week with a talk on Thursday in Brisbane and continue in various Australian cities to end in Melbourne on Saturday. Ms Ali was also scheduled to appear on ABC panel show Q and A this evening but has also cancelled.

“Ayaan Hirsi Ali regrets that for a number of reasons including security concerns, she must cancel her upcoming appearances," a Think Inc. spokesperson said in a statement today.

"She wishes the event organisers success in their future endeavours and hopes to return to Australia in the not too distant future."

Organisers promised that all ticket holders will be refunded.

Prior to the announcement, earlier today, Persons Of Interest, a news and media page dedicated to conversations about social justice, published a video titled “Ayaan Hirsi Ali: You don't speak for us," showing a group of Muslim women responding to the activist. The video went viral and has so far received over 100,000 views.

Ayaan Hirsi Ali's planned tour would not have been the first time she would have visited Australia, but it's the first time there has been significant public opposition, as a group of high-profile Australian Muslim women, many of whom are featured in the video above, launched a petition against the outspoken Dutch-American activist, claiming she "does not speak for us."

Unlike Geert Wilders, who was recently defeated in the Dutch national election, the Somali-born Ayaan Hirsi Ali might seem like an unlikely advocate of the Dutch far right: she’s female, black and grew up Muslim. Now, a group of Muslim women in Australia are petitioning her upcoming speaking tour to the country.

The group, which includes a number of high-profile writers, academics and activists, have expressed “disappointment” over Ayaan Hirsi Ali’s invitation to speak in Australia as part of a tour organised by event group Think Inc.

In an online petition, titled "Ayaan Hirsi Ali does not speak for us," the group stated that ,"Hirsi Ali’s sheer presence in Australia undermines both intra and inter-community efforts toward social cohesion and in providing platforms for Muslim women to champion their own causes.”

Notwithstanding that position, the group extended an invitation for Hirsi Ali to meet with them during her visit and to engage in a discussion to debate and contest her views regarding Islam and the status of women in Islam.

"Ayaan Hirsi Ali does not speak for us"

The statement, which is signed by about 398 Muslim women in Australia, including high profile writers and activists, condemns Hirsi Ali’s discourse, which they say is "grounded in hate-mongering and bigotry." They also fear that her views against Islam will serve to increase what they describe as "hostility and hatred towards Muslims in a world of increased Islamophobia.”

The author is well known for her views condemning Islam and its incompatibility with the West.

During her visit to Australia last year, she said on the ABC’s program Q&A, “critics of Islam must be less squeamish about criticising practices carried out in Muslim countries such as forced marriage.” Hirsi Ali has often used her own life experiences to shed light on the conditions of women in Muslim countries and around the world. Her story as a victim of female genital mutilation, a refugee who fled the civil war in Somalia to then to be married off to a Somali man against her will, are widely reported.

“Hirsi Ali’s brand of hate speech and incitement can lead to acts of violence.”

The protesting group insists that they do not oppose Hirsi Ali’s right to express her opinion but highlight that her views may incite more aggression against Muslims in Australia and worldwide.

Award-winning playwright and author Samah Sabawi, a signatory to the petition explained “Hirsi Ali’s brand of hate speech and incitement can lead to acts of violence.”

“We have seen this in the US as Trump’s anti- Islam rhetoric directly lead to various attacks against Muslims.  Muslim women, especially those wearing hijab, are especially vulnerable as they are identifiable targets.”

Think.Inc, the company that was organising Hirsi Ali’s tour to Australia (titled: 'The Hero of Heresy') does not see the visit in the same light.

The company’s spokeswoman Suzi Jamil in a phone call before the cancelation told SBS Arabic 24 that the company provides a platform for individuals to discuss ideas and encourage discussion throughout society.

“We don’t feel that she’s spreading hate-speech and we don’t feel she is an Islamophobe, otherwise we wouldn’t be bringing her here,” says Jamil.

Ralf Schumann, the deputy president of the Australian far-right group the Q Society, tells SBS on behalf of the group “We welcome Ayaan Hirsi Ali.”

Women’s rights activist and high-profile restaurateur Hana Assafiri, who was recently added to the Victorian Honour Roll of Women for 2017, and runs the event 'Speed Date a Muslim,' is a spokeswoman for the online petition against Hirsi Ali.

“Violence against women is an expression of misogyny underscoring all societal systems,” Assafiri tells SBS.

The group’s statement rejects “any Islamic basis for the violence that occurred to Hirsi Ali in her life and the violence perpetrated to women all over the world who have fallen victim to culturally- influenced misogynistic abuse.” Assafiri also raised concerns about the lack of community protest in Australia against Hirsi-Ali’s previous visits and public engagements compare with, for example, the far-right Dutch politician Geert Wilders (freshly defeated in the Dutch National election) who holds similar views against Islam and was faced with strong opposition upon his previous visits to Australia, including a 2015 visit to Perth to launch a far-right political party 'The Australian Liberty Alliance'.

“Society can readily identify the dangers of Geert Wilders and organise to protest against his message on the grounds that his discourse undermines the principles of a homogenous multicultural Australia,” says Assafiri.

“Yet Ayaan Hirsi Ali, who parrots the same conversation is not only embraced in some circles but also seen as a voice of elegance and reason in some more progressive circles regarding her views on reforming Islam.”

“Society can readily identify the dangers of Geert Wilders ...yet Ayaan Hirsi Ali, who parrots the same conversation, is not only embraced in some circles but also seen as a voice of elegance and reason."

Doubt has been cast on various elements of Hirsi Ali’s story leading to questions about her credibility.

Samah Sabawi told SBS that Hirsi Ali was forced to step down from Parliament when a Dutch documentary revealed “Hirsi Ali lied to Dutch authorities about her past,” says Sabawi. ”She didn’t flee from civil war in Somalia but left before the war broke out and arrived in the Netherlands from Kenya.”

“She grew up in a secure environment, her family weren’t fanatic Muslims, her brother went to a Christian school, many other aspects of her story turned out to be a lie including her claim of threats of honour killing.”

Below: The documentary in question by Dutch television program Zembla

Hana Assafiri says Hirsi Ali’s lack of credibility should undermine her position as an authority on Islam.

“Most of Ayaan Hirsi Ali’s career is built on lies, deceit and misinformation,” Assafiri alleges. “Namely when claiming asylum, the circumstances surrounding her marriage and abuse.”

“Yet we continue to portray the lies inherent in her discourse as truth to audiences who are less informed about her past, and especially those who simply want to believe her to be both the victim and expert of Islam.”

The Rationalist Society of Australia, which champions secularism, has issued a statement of support for Hirsi Ali’s right to speak during her upcoming visit. President of the Society, (as well as Victorian Senate candidate for the Australian Sex Party) Dr Meredtih Doig, tells SBS Arabic24 that "For anyone to say that Ayaan Hirsi Ali 'lacks credibility' is absurd.”

“This is a woman who has written four books, has founded a charity to help Muslim women suffering in America, and who has demonstrated time and again her intelligence and courage in more life-threatening situations than most of us could imagine.

“She does not indulge in gratuitous slanging matches but brings clear-sighted analysis to her pronouncements. If listeners do not agree with her conclusions, they should argue it out with her. But trying to undermine by saying she 'tells lies' is simply a diversionary tactic, unworthy of the gravity of the issues involved." 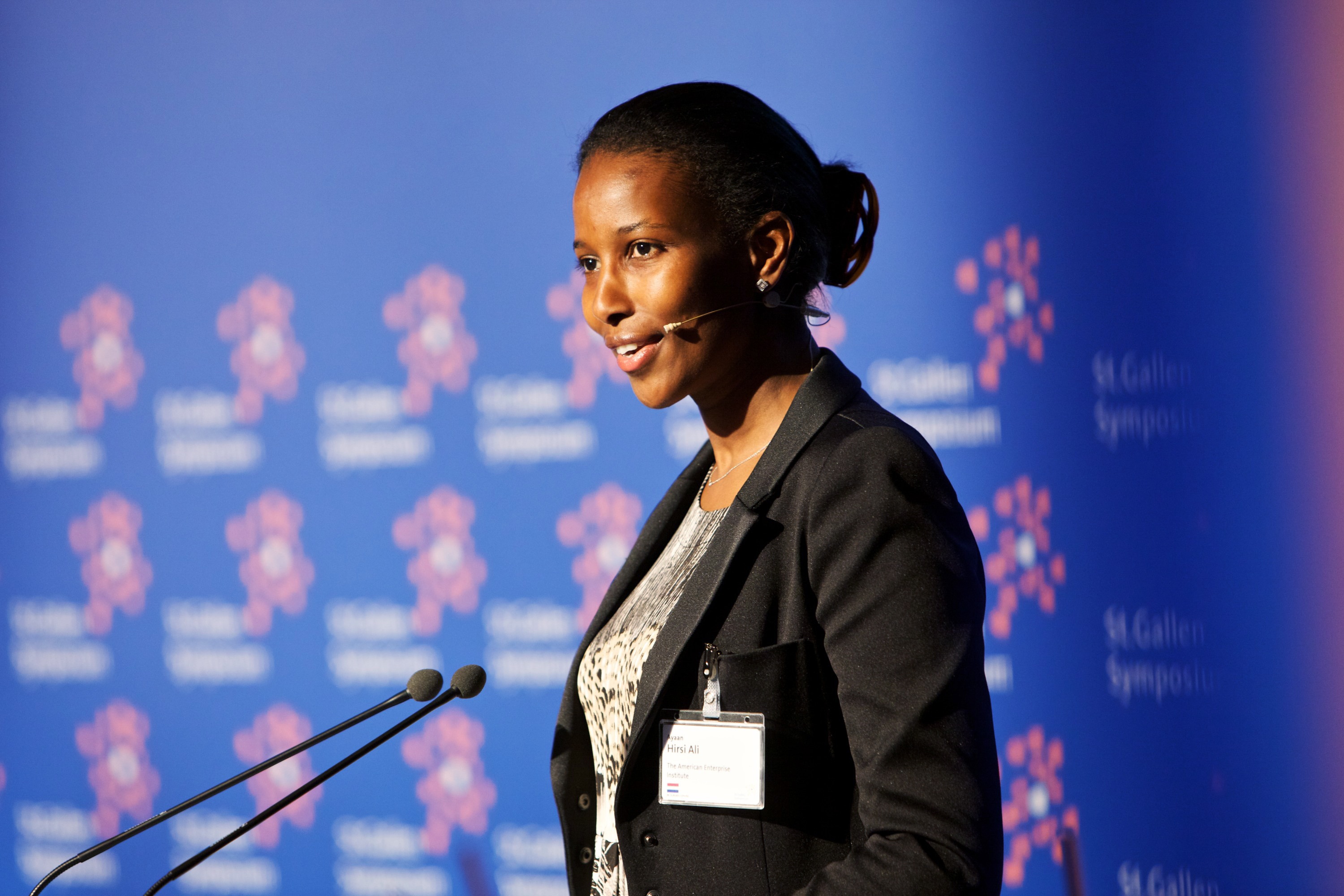 The petitioning group extended an invitation to Hirsi Ali, through Think.Inc, the company managing her tour in Australia, expressing a desire for a conversation forum to enable engagement with Muslim women in Melbourne and Sydney.

Sherene Hassan, a member of the group, and director at the Islamic Museum of Australia, says the invitation was made in good-faith to engage directly with Hirsi Ali in a dialogue about her views and experiences.

“If Ayaan Hirsi Ali is genuine, if she’s sincere, and wants to improve the plights of Muslim women, then she would engage with us in a conversation,” says Hassan. “Instead of constantly speaking to the media and dehumanising the whole Islamic faith and using very inflammatory language.”

“All she does is increase hatred and bigotry that exist in the community, and we are extremely concerned about that,” Hassan says.

Assafiri adds “We want to emphasise that freedom of expression, when it goes un-vetted and promotes hate, has a profound impact on women and especially the most vulnerable sections of the society.”

Assafiri also adds that the group who have signed the petition, 'condemns unequivocally the subjugation of women through forced marriage, female genital mutilation and violence perpetrated in any way." Debate on the Burqa : Lifting the veil on Islamophobia in Australia "Only terrorists and extremists will gain from billboard outcry" - Muslim Association

Listen to SBS Arabic 24 as well as BBC here.