Sri Lankan cricketers wore pollution masks during the third Test against India at Delhi’s Feroz Shah Kotla cricket ground on Sunday with the game stopping for nearly twenty minutes after the visitors complained of breathing difficulty.

Sri Lankan coach Nic Pothas said his players – who took the extraordinary step of wearing face masks – were “coming off the field and vomiting."

"I think it's the first time that everybody has come across that situation," he added.

"There aren't too many rules regarding pollution. What we are going to do tomorrow is in the hands of the match referee. They will have meetings tonight to put in some sort of a precedent if it happens like this tomorrow." 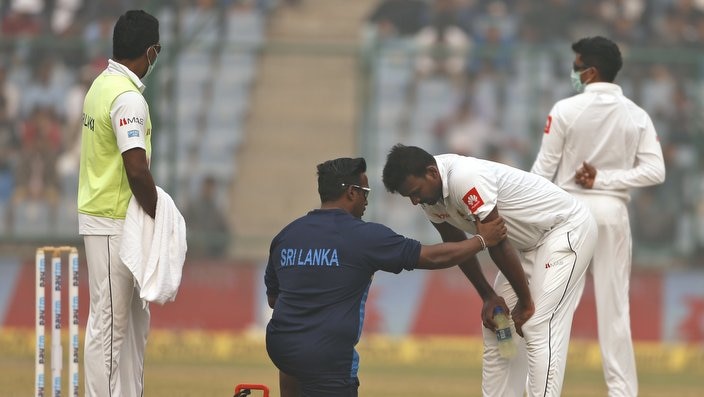 The play was stopped for 17 minutes after lunch as Sri Lankan players wanted to leave the field complaining of severe pollution.

After the umpires and the match officials convinced the visitors to return to the field and the play resumed, it was again stopped in the 123rd over when Lahiru Gamage stopped in his run-up and complained of uneasiness.

Later in the 127th over pacer Suranga Lakhmal went off the field without completing his over, sparking another round of consultations between the umpires and the Sri Lankan captain over this. Indian coach, Ravi Shastri also consulted the visiting team manager Asanka Gurusinha. NDTV has reported that the Sri Lankan Cricket Board has asked the Board of Control for Cricket in India (BCCI) to explain why Delhi was picked to host a game despite concerns of pollution in the city. But the BCCI accused the visitors of making a fuss.

"If 20,000 people in the stands did not have problem and the Indian team did not face any issue, I wonder why Sri Lankan team made a big fuss?" TOI quoted CK Khanna, acting BCCI president as saying.

Many Indian fans also echoed the reaction online on the Sri Lankan players' move of wearing masks and leaving the field.

RT If You Feel Sri Lankan Team Deserves An Oscar. They're Wasting Their Talent In Cricket. #DelhiSmog #INDvSL #INDvsSL pic.twitter.com/7F6oHkKJYG

However, many believe the pollution levels in Delhi are indeed alarming.

To all the Indians who said Sri Lankans are cowards to wear masks, here are few pics of your own people covering their faces due to Delhi pollution. It’s currently on very unhealthy stage and India must take actions before these innocent people suffer even more. #INDvSL pic.twitter.com/GtO3uWrnwc

Really sad state this, when they have to come out and play with masks on. And to think about the people who go through this plight on a daily basis. Pictures compare the AQI in #Delhi with that in #Trivandrum and #SriLanka. #INDvSL #DelhiSmog pic.twitter.com/ViCuXG2OcP

The Times of India reported that Indian spinner Kuldeep Yadav was also seen sporting a mask earlier in the day as he brought drinks to teammates on the field.

Delhi has been ranked among the world's most polluted capital cities, with air quality worsening in winter as cooler air traps pollutants near the ground. The pollution levels in the city had hit 15 times the WHO’s set maximum levels last month at 384 PM, with health experts declaring a public health emergency, shutting down schools for days.

On Monday, Delhi's air quality was rated 'hazardous' at 358 PM. In one particular area, it was measured 702 PM.