Read this story in English:

Trapped in what he describes as a “prison-like” detention centre in Melbourne, Guru skirts the edge of the boundary wire on a wet August morning, longing for a life that could have been his on the other side of the fence.

Dreams broken and hope replaced with despair, the 39-year-old reflects on the past three of years of his life in Australia, knowing well that the path of his life is now shifting.

He stands to be deported from Australia on 7 September 2018. Guru is slated to be deported from Australia on September 7th, 2018
Supplied

When he had arrived in this part of the world, back in 2015, Guru’s dreams were big but his means were equally small.

“All I ever wanted was a life in this promised land,” reminisces Guru, once a practicing Hindu priest in the city of Ipoh in Malaysia, who says he was “forced to flee” the country because he feared “persecution”.

And hence, he arrived in Australia in early 2015 on a tourist visa with the hope of attaining an asylum - a “golden apple” as he loves to call it.

But Guru is not alone in his pursuit of getting a bite of that apple.

According to the numbers revealed by the Administrative Appeals Tribunal earlier this year, Malaysians make up 50 per cent of appeal cases for refugee status in Australia, citing fear of repression mostly on the grounds of race, religion, political opinion or their affiliations.

So with a passport, very little money, and a suitcase full of his favourite clothes, Guru settled in the town of Robinvale in the north-west of Victoria.

In the process of settling in, he quickly struck up acquaintances and made friends, unaware that some of the people he had randomly met were going to have a significant impact on the next few years of his life.

One such person was fellow Malaysian, Jenny* who, like him, had come to Australia as a tourist and was seeking ways to extend her stay.

After a few futile efforts to find an agent that could help them, their search ended in Melbourne at the doorsteps of an immigration agent named Jack*, a “Godfather of sorts” for all freshly arrived Malaysian migrants, legal or otherwise. Guru at his Dandenong residence with his cats
Supplied

“When we first met Jack, we felt we had found everything in one man,” says Guru in his broken English.

“He promised to file a protection visa for me, student visa for Jenny and in the meantime also gave us a place to stay.”

“Our happiness knew no bounds. I felt like I had finally arrived in the promised land where all dreams come true,” he recalls with a hint of sadness in his voice.

But little did he know that from here onward, what he thought would be his uphill journey, was soon to become a downwards spiral, hitting numerous obstacles.

“He (Jack) called me to a Woolworths store in Dandenong (a south eastern suburb of Melbourne) to collect my passport and asked me to sign a few documents for my visa application.” Guru in his early days in Melbourne
Supplied

“Soon the good news came. I was told that I now had a temporary visa and my protection visa application too had been filed.

“Jack then arranged for a job for me and gave me a place to stay in a rented accommodation in Dandenong which was shared by at least 20 other Malaysians at the time.

“In the beginning, Jack had solutions to all our problems”, says Guru.

“He owned many businesses in the construction and cleaning industries where most of us would work for $100 per day.”

But it didn’t take long for things to go south. "All I wanted was a life in Australia," says Guru
Supplied

Guru alleges that the “godfather” changed into a “menacing” boss who started unleashing his terror on him and other immigrants who, too, had trusted Jack and paid him to arrange their visas.

“We were kept like slaves in a tiny house in bad conditions. All our documents including passports would remain in his custody.”

“He would control all our activities. He hardly ever showed up. His team of men would escort us to work and then bring us back to the cramped house.

“They even transferred all their bills and traffic offences to our names.”

“If anybody tried to blow his cover or report to the police, his team of goons would become abusive and violent. Once, I even witnessed them beating up one of my housemates mercilessly.

“He and his men would threaten us that anyone who dared to raise their voice would be sent back to Malaysia.

“But then there came a time when I lost my patience”, says Guru.

“I went to the police and reported him.

“But the police did nothing and sent me back saying that it is a civil dispute that must be settled between the two of us.”

Dejected and disillusioned by the man he once thought was God-sent, Guru then committed himself to seek another course of action.

“I went to the AAT (Administrative Appeals Tribunal) to check my visa status and to decide on my next steps.

He says he was shocked at what he discovered.

“They informed me that although I had a bridging visa, I had NO work rights.”

“That meant, that not only had I been working illegally, but my protection visa application too had been withdrawn.

“I felt like my whole world was falling into pieces.”

“Imagine sister…I had no work, no money and no visa. My future was gone - gone sister,”

Guru breaks down and pauses for a long time before continuing his story. "My whole world was falling into pieces"
Supplied

“Then I went to the ASRC (Asylum Seekers Resource Centre) for help”, he says after regaining composure.

He claims that he was unaware that his application for a protection visa had been withdrawn.

“I have no idea how somebody could withdraw my application without my knowledge.

“I’m sure Jack’s men must have forged my signatures and cancelled my appeal for an asylum because I complained to the police about them,” alleges Guru.

“He is quite capable of doing anything.

“He even burnt my car back in Malaysia and threatened my family.”

When SBS Punjabi approached ASRC, they refused to divulge any details regarding Guru’s application saying, “The ASRC has no comment at this stage, as we can't comment on clients and cases that are currently open.”

In the meantime, Guru was introduced to Kevin* yet another immigration agent who reportedly promised him the exact same things as Jack.

“It was like an action replay. I again fell into the trap,” says Guru.

“Just like Jack, Kevin also took thousands of dollars, assuring me that he would apply for my work rights.

“After a few days, he told me that I could now work full time and I was no longer in danger from Jack’s men.

“For the first time in years, I felt relieved.

“Kevin employed me and also gave me a house to stay, not far from where I used to live while I was working for Jack.”

Guru acknowledges that he never demanded to check the documents himself despite being “fooled” once before.

“Like Jack, Kevin too had many businesses. My job was to drive a group of people to work and bring them back to the rented house in Dandenong.” 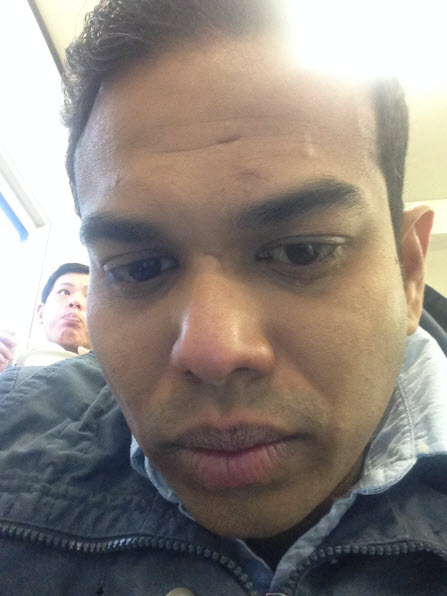 "What wrong have I done?"says Guru with a cracking voice
Supplied

But unlike the last time, warning bells started ringing in his head this time round and he soon felt that Kevin, too, had vested interests.

“He too was selfish and just wanted to serve his own purpose. He never made a single visa application on my behalf.

“I got him more than 30 new clients who had been duped by Jack, but he never helped anyone of us,” alleges Guru.

But this time, his quest to bring out the “truth” came with a heavy price.

He not only lost his savings, his livelihood, but also Jenny’s support who over the years had become “more than a friend.”

“She too turned out to be selfish, left me and went on to work with Kevin.”

But whilst dreams were slipping away and checkpoints were blurring, Guru was informed that his application for a protection visa had been considered and his matter was slated for hearing before the Federal Circuit Court on April 18th earlier this year.

“Every time I would see a glimmer of hope, it would vanish, just like that.”

“Just when I thought my destination was in sight, I was kidnapped, assaulted and confined in a house in Dandenong by a group of unknown men.”

Because of this, Guru failed to show up for the direction hearing.

“I don’t know who those men were, but am sure that their only motive was to prevent me from attending the court hearing.” Guru shows the scars he received in this “assault” and the finger that was fractured when the group of men allegedly beat him up.

Despite this setback, and determined to chase a life he had once imagined for himself in Australia, Guru moved on and embraced the chaos his life had become.

The turbulence in his life taught him to live the life of a nomad, which meant switching lodgings every few months. “I never made friends, kept my family photos in a shoe box, which were stacked away in the boot of my car. I had no place that I could truly call home.”

But just when Guru thought he had mastered the art of the dodge, he received the biggest blow of all.

It began on an ordinary Sunday morning on July 27th when Guru was pulled up by a traffic police officer on his way to a regular meeting with his legal advisor.

He was arrested for speeding and driving without a valid licence. Later, when police discovered that his bridging visa had expired, he was bundled off to an Immigration Detention Centre.

Now isolated and confined, Guru wonders how things might have turned out differently, if he had taken the other road or if he had encountered another police officer. In the meantime, he has been re-scheduled for hearing at the Federal Circuit Court in Melbourne, because of his alleged kidnapping.

But here, too, he seems to have run out of luck since his case has been slated for hearing on September 17th – ten days after his scheduled deportation by the Immigration Department.

His application for a bridging visa to extend his stay just so he can appear for his hearing was denied at the time of publishing this article. 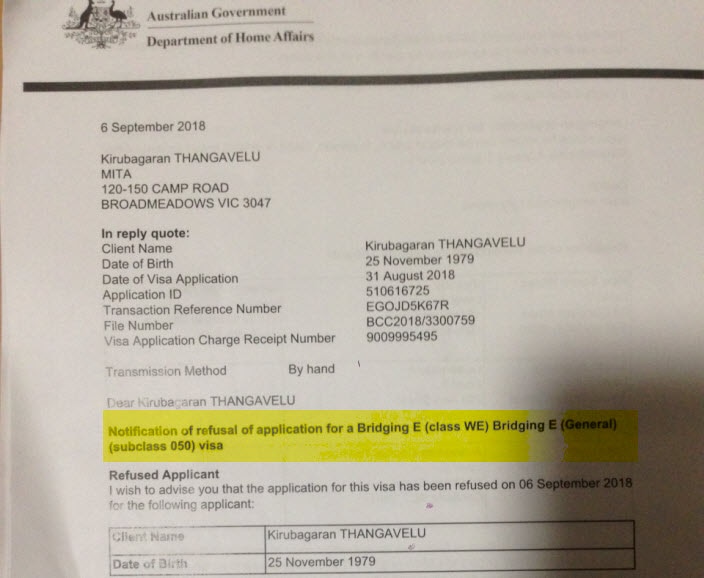 Now, facing the prospect of going back to the life he had bid goodbye to a long time ago, Guru called his estranged family recently.

“I wanted to fill the gaps in my memory of the time we had spent together so many years ago.

“In these years, I have never bothered to check on my ex-wife and son.”

He mentions them for the first time.

“I wonder how they will receive me. Will they cry, hug me or if my son even remembers me?” says Guru, his voice cracking.

“All I ever wanted was a good life in Australia.”

“Was it a crime sister?” he mulls, skirting on the edge of the fence, on the other side of which, stands his life, love and longings.

* Some names have been changed. 30 Punjabi immigrants are deported to India every day 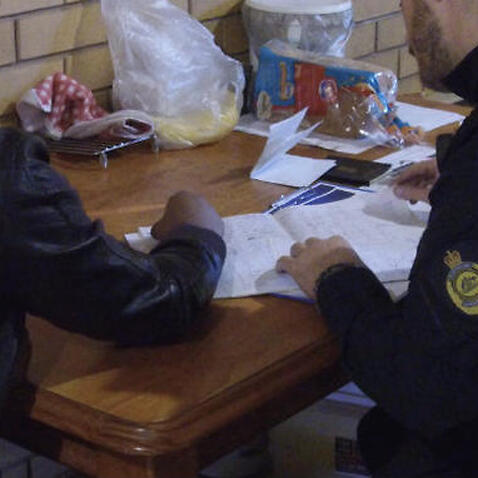