After being forced into marriage as a child, Habon Mohamed still carries vivid and painful memories of that time, and strongly advocates for the elimination of child marriage, using her experience as an example.

Habon Mohamed had a tumultuous childhood. Born in Somalia but raised in Kenya, Habon was separated from her mother at an early age. She then discovered as a child that the family she grew up with were not her true parents. While she came to terms with that she was married off to an older man. It's a chapter in her life she recalls with sadness.

She remembers how one day, without any forewarning, she was told her mother lived in Kenya and the woman she thought was her mother was, in fact, her aunty.

Habon says she couldn’t believe what she was hearing.

“It took me a week for the news to sink in, I thought it was a joke or dream,” she says.

The former child bride says she knew the family treated her differently because all the other children in the family went to school except her. She thought that was part of a custom that doesn’t encourage girls to go to school.

“I said to myself maybe its because the rest of the children were boys and I was the only girl,” she says.

Habon was married off to a much older man when she was at the age of 14. The man was her uncle’s friend, and it is an episode in her life she says traumatises her just  in "remembering it”. Habon Mohamed was forced to marry at the age of 14. Image Source: SBS Somali
sbs somali

Child marriage among girls is common in Africa, and according to UNICEF, African nations have the highest incidence rates of child marriage, with over 70 per cent of girls marrying under the age of 18 in some nations.

As minors, child brides are rarely able to assert their wishes or rights in those countries.

Under the Marriage Act of 1961, the legal age for a person to marry in Australia is 18 years of age. However, there are exceptional and unusual circumstances when it may be possible for a person to be married at the age of 16.

Forced marriage was criminalised in Australia in 2013 under the Australian commonwealth criminal code.

Yet forced marriages do happen in different scenarios in Australia, and that can include girls who are residents or citizens in Australia sent overseas to marry. In other cases, the marriage takes place in Australia.

The data on forced marriages is quite scant and successful prosecution depends on reporting by the victims, who are themselves in vulnerable positions. As of July 2019, data showed the federal Police received 325 referrals of potential forced marriages since criminalisation in 2013.

Laura Vidal is policy and research specialist at Good Shepherd Australia and New Zealand, a nonprofit organisation advocating for women and girls.

She says young people who are forced to marry often experience a range of ordeals both physical and psychological.

"They are often in a situation where they are having children young and that has a physical impact on their health," says Vidal. "The other concern is psychological, people experiencing trauma from marriages and relationships they don’t want to be in."

“And they also experience disruption or potential cessation of their education so they no longer able to study,” she says.

Other impacts include social isolation or estrangement from their families.

Vidal says her organisation has been calling for amendments to the current policies and legislation at the federal level.

”[We want to] implement forced marriage protection order similar to the system in place in the UK which provides a range of protective measures for people who are at risk of forced marriage,” she says.

Habon says because of social norms, customary or religious laws that condone the practice, the option to say 'no' was not available to her.

She says the trauma started as soon as she moved in with the man.

Many child brides become pregnant before their bodies can safely carry or deliver children, and in her forced marriage Habon had a daughter who died soon after. She says she does not clearly remember the circumstances of her daughter’s death.

“All I remember is my daughter was on my lap... I used to ask myself. Did she die or was she taken away.? I used to cry in the house alone,” she says.

Habon described the relationship as “tough” and tried to run away from the house she shared with the husband at every opportunity.

Falling pregnant again she decided to escape from the relationship for good, joining her mother in Kenya where she successfully sought help to divorce the older man. 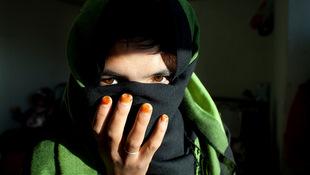 Her view on child marriage is unequivocal.

"It’s wrong, I advocate against it on social media, I share the trauma and hurt it caused me," she says. “Those girls are not fully developed both mentally and physically. They are still growing and can’t handle pregnancy or childbirth."

Reflecting on a practice known as “vacation marriage” involving Somali diaspora men from Western Countries exploiting young, poor and vulnerable women in Kenya, Habon condemns these men and pleads with them to treat these young girls the same way they would their daughters.

Many of these young girls are lured by the promise of a better life abroad.

“We see men from the Western Countries in their 60s and even 70s marrying very young girls with the consent of the girl’s parents who are not thinking of their daughter's well-being but motivated by financial gain... I would like to see that practice stopped because it brings a lot of trauma and sadness to these young girls.

“Those older men should be ashamed of themselves,” she says.