Fessehaie Abraham has helped bring the world's attention to the plight of his homeland Eritrea, with the help of high profile Australians including Fred Hollows and Thomas Keneally, for whom he arranged passage to the hermit African nation.

Eritrea and its struggle for independence remain little known to foreigners around the world, but one man, who became the country's first ever ambassador to Australia, has spent decades working to bridge the gap between the two nations, creating a pathway for high profile Australians including Fred Hollows and Thomas Keneally to visit Eritrea, help its people and share their stories.

When Fessehaie Abraham arrived in Australia in 1979 as a refugee from Eritrea, he had two missions.

Firstly, he came to study at a university - but his second mission was to support the Eritrean people in their struggle for independence.

Fessehaie had never imagined that the struggle of his fellow countrymen in the jungle of Eritrea would attract the attention of the iconic Australians such as Fred Hollows, writer Thomas Keneally and the people and government of Australia at large.

Eritrea, a small country in the horn of Africa, was colonised by Italians for fifty years and federated with Ethiopia in 1952 by the United Nations.

The Ethiopian Emperor Hailesselasie annulled the federation agreement and annexed Eritrea to become one of the 14 Ethiopian provinces. Eritreans then started an armed struggle against Ethiopian forced annexation.

"Great Australians have done many good things for Eritrea and me."

Fessehaie was born in Eritrea during this time of political turmoil in the country, where all his generation were engaged in fighting the injustice imposed on their land.

"All of us were committed in one way or the other to liberate our country by all means," Fessehaie tells SBS Tigrinya of the mood of his generation during 60s and 70s. 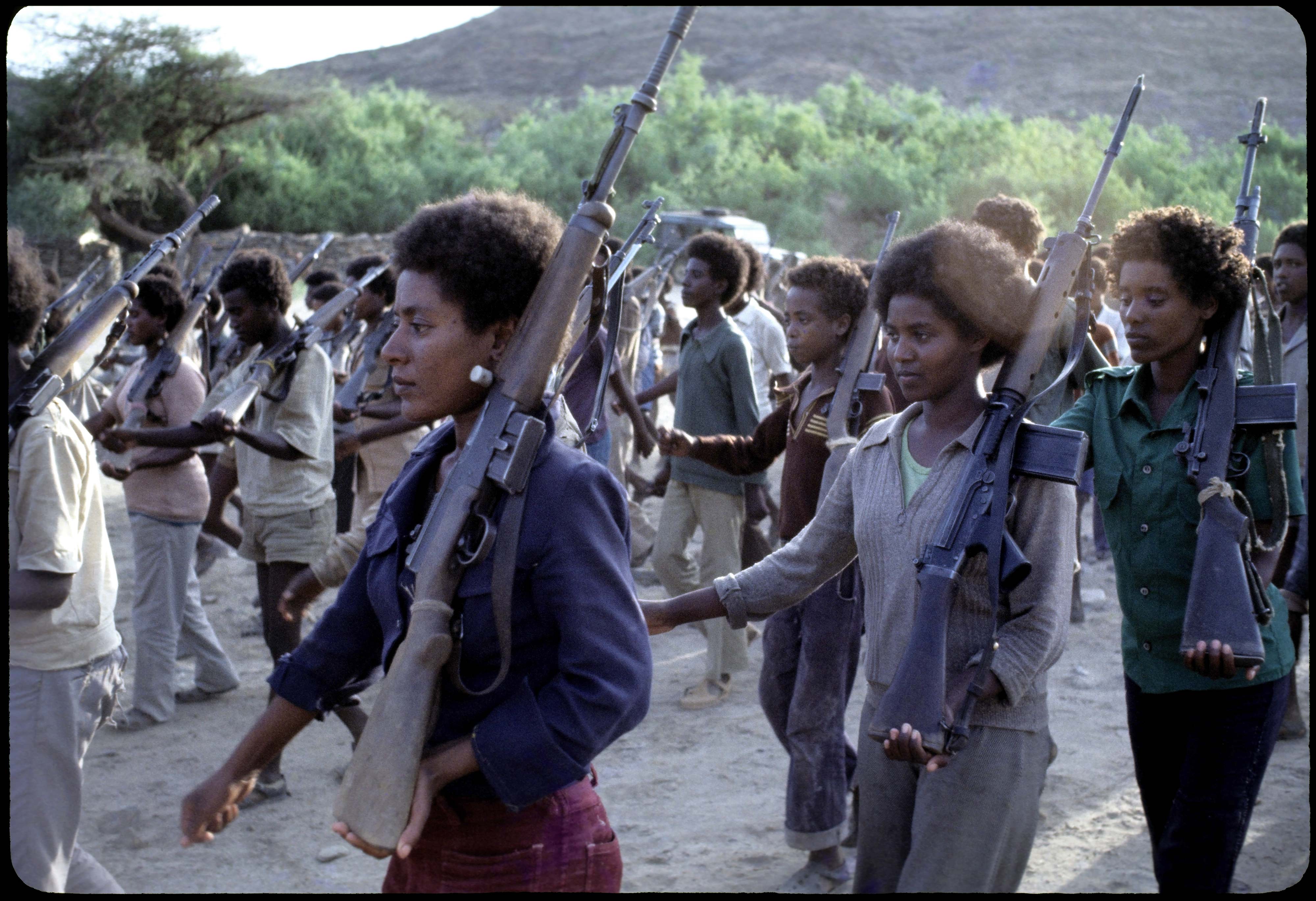 When Fesshaie went to Addis Ababa University to study chemistry in the early 70s, political changes in Ethiopia and Eritrea moved fast.

While the armed struggle to liberate Eritrea from Ethiopian occupation intensified, the Emperor government in Ethiopia was toppled by a communist military junta.

Fesshaie and his friends who were studying in Ethiopia had to make their way in different directions.

Some joined the armed struggle in Eritrea while others dispersed to various countries.

Fessehaie, who always had a dream to pursue his studies, got a sponsorship to study before he tried unsuccessful journey to join the armed struggle in Eritrea through Somalia.

"If you approach Australians, individuals or organisations, for a support and if you explain to them the problem and the type of support needed properly, they are always ready to lend you their hands."

Upon arrival in Australia in 1979, while studying chemical engineering at the University of New South Wales, he embarked on meeting with organisations to support the Eritrean people through relief programs. 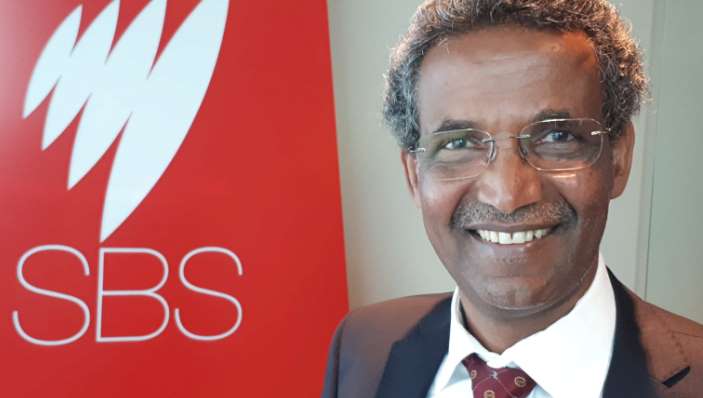 Before he came to Australia, Fessehaie had already been connected with the Eritrean Relief Association (ERA) which was the relief arm of the Eritrean People's Liberation Front (EPLF).

Fessehaie wasted no time in meeting some of the aid organisations in Australia and he got a positive and quick response from those organisations.

"If you approach Australians, individuals or organisations, for a support and if you explain to them the problem and the type of support needed properly, they are always ready to lend you their hands," says Fessehaie.

The National Council of Churches was the first Australian organisation that Fessehaie had been able to connect with ERA.

This organisation helped with relief and development programs before Eritrea was even an independent country.

Through this program, the people and the Australian government raised about AU $32 million and sent to the people of Eritrea in the form of food and other types of aid.

"One day I went to see this eye specialist called Fred Hollows. While he was examining my eyes, he asked me where I was from and what was I doing....."

"One day I went to see this eye specialist called Fred Hollows," says Fessehaie. "While he was examining my eyes, he asked me where I was from and what was I doing."

That first meeting and conversation between Fessehaie and Hollows started the long journey for the ophthamologist to become a best friend of Fessehaie and the first person to be bestowed an honorary citizenship of Eritrea.

In 1987, Fessehaie organised for Hollows to visit Eritrea. 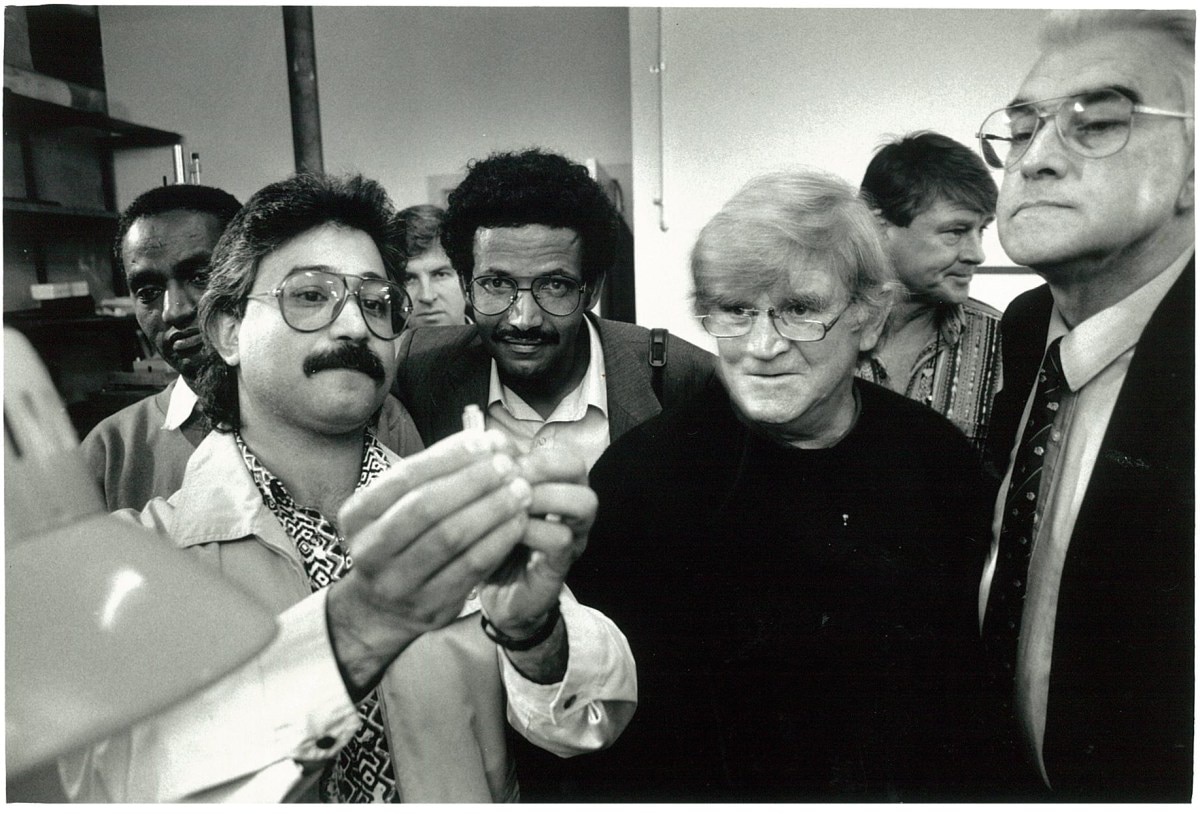 It was then that Fred Hollows became impressed by the Eritrean medical activities while they were engaged in war after war with Ethiopians. Fred Hollows made a second trip in 1990 accompanied by 60 minutes television program while he was diagnosed with cancer.

After consecutive visits to the areas of strong holds of the fighting group for Eritrean independence, Fred Hollows dreamed of bringing an intraocular lens factory to Eritrea.

“While he was under surgery for his cancer, Fred was thinking about his dream to build the factory in Eritrea," says Fessehaie.

"That is why, despite his seriousness of his illness, he went to the capital Asmara in 1991, months after the whole Eritrea was liberated and laid a foundation stone for the factory.

"The Australian government supported the project.

"The equipment for the factory was manufactured in Australia, and shipped to Eritrea.

"After Fred Hollows passed away, the factory, which was the first of its kind in Africa, was opened in 1994 by the President of Eritrea and the then-Australian Foreign Minister Gareth Evans." Fessehaie with his mother and Gabi Hollows after the opening of the intraocular lens factory in Asmara.
Supplied

"When Keneally visited our ERA office, we did not know much about him," explains Fessehaie. "And when he asked us to visit Eritrea, we asked him to write a letter.

"But when we read the letter we were so astonished to know who Keneally was."

So Fessehaie organised a trip for Thomas Keneally and the Man-Booker prize winning author then wrote about the experience of his visit to Eritrea in the book Towards Asmara.

The book was launched in 1989 by then-Prime Minister Bob Hawke. Many people in Australia and around the world would know the struggle of the Eritrean people and their causes through the work of Thomas Keneally. 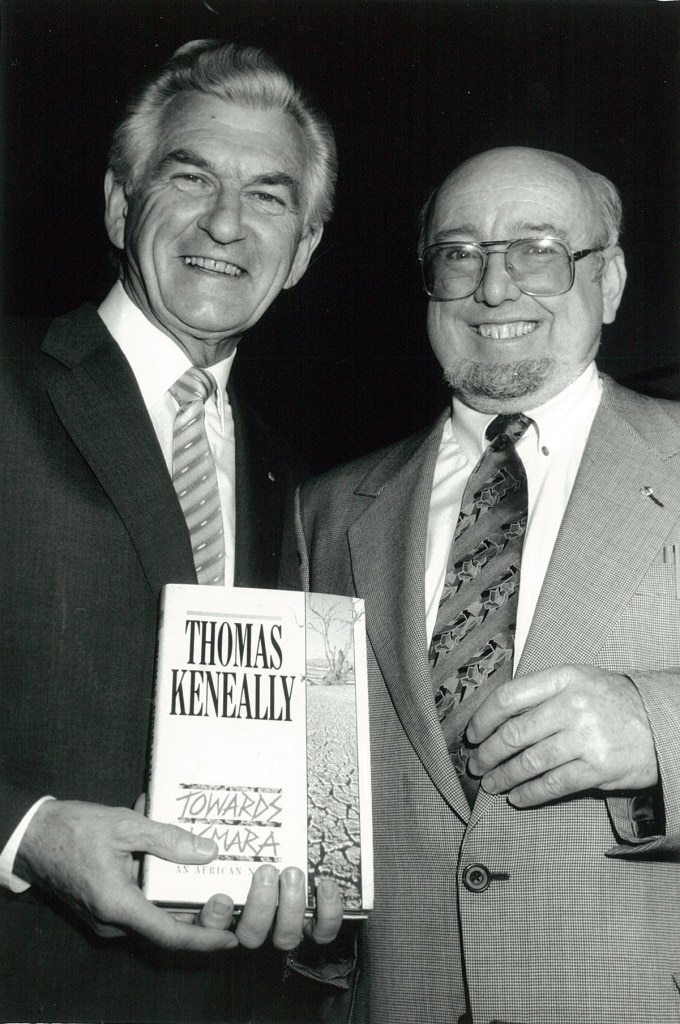 "I believe Keneally’s book ‘Towards Asmara’ helped draw the attention of the world to the plight of the Eritrean people," says Fessehaie.

Eritrea held, through the UN’s sponsorship, a popular referendum in 1992 and become the 54th official African nation.

Fessehaie became the first Eritrean Ambassador to Australia from 1993 to 1997. 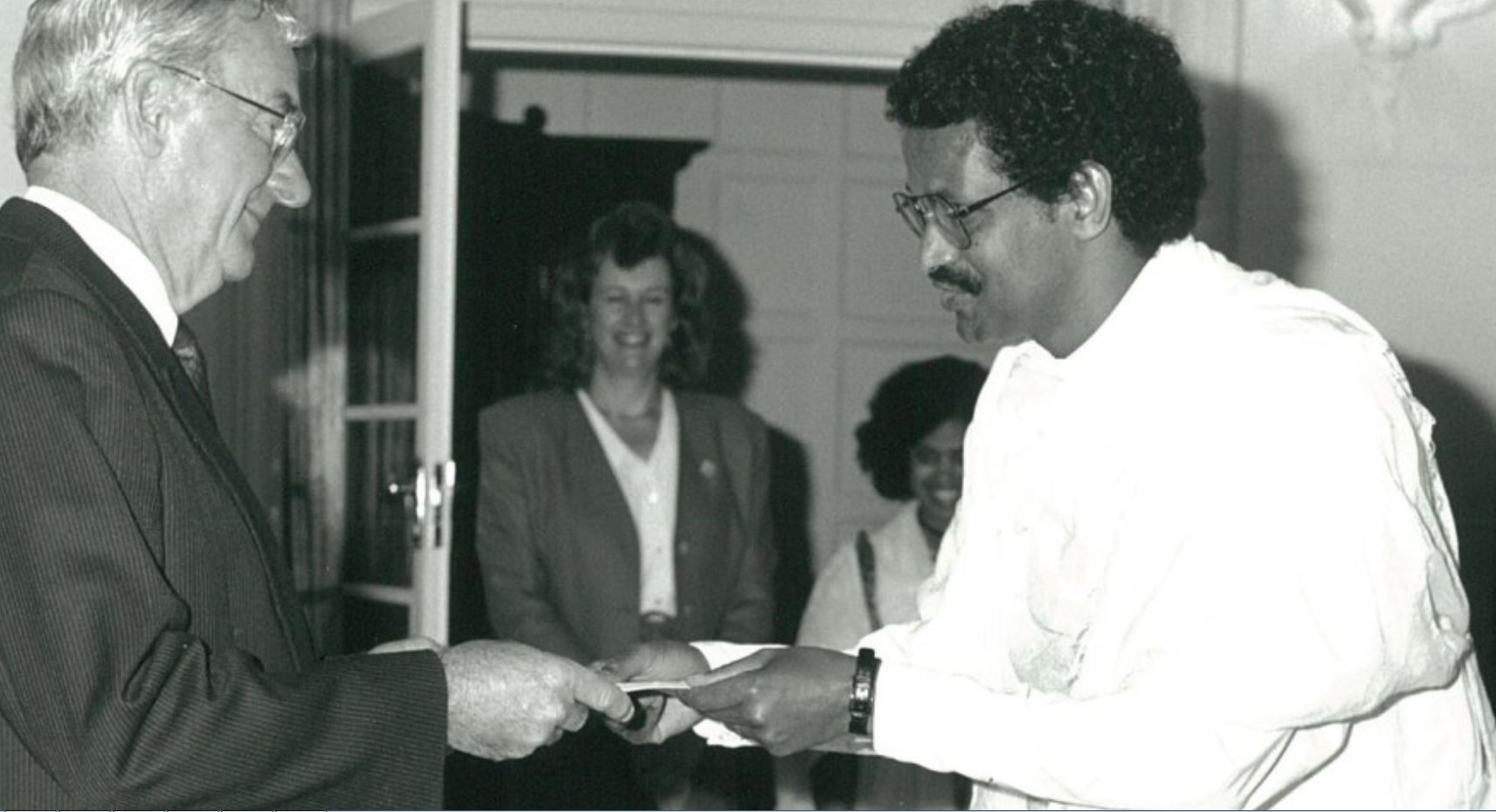 Because of his long years of effort to connect Australia with Eritrea, it was easier for him to get scholarships for Eritreans.

Through him, many have received the opportunity to study in the fields of agriculture, mining, health and engineering in different Australian universities - particularly UNSW - Fessehaie’s former university, which commenced a program in engineering with the University of Asmara.

The foundation that Fessehaie created has, for two decades, paved the way for several Australian parliamentarians, including Foreign Minister Gareth Evans, to visit the independent Eritrea. Fessehaie Abrahams looks on as then foreign-minister Gareth Evans signs an MOU with the Eritrean government in the capital Asmara in 1994.
Supplied

When the referendum was held, a team of Australians were sent to be part of the observatory group of the United Nations.

Many Eritreans came to Australia to study and many Australians went to Eritrea as voluntary workers.

The Eritrean government removed Fessehaie’s from his ambassadorial position in 1997, for the reason that he had dual Eritrean and Australian citizenships. Fessehaie has never accepted this reasoning and says he is also disappointed with the current Eritrean government.

Since Eritrea got its independence in 1991, the country has been ruled by the leader of the guerrilla fighters, Isaias Afewerki for 27 years.

Eritrea has no national elections, no legislator, no independent media and religion freedom remains curtailed.

Fessehaie expressed the differences of the dream he had for Eritrea and the reality of life in the nation today.

"For me, the past 20 years have been years of agony," he says. "The country has lost many economic opportunities."

"Every day I feel sad about the top officials who have been imprisoned for 17 years without any trials.

"I worked under three foreign ministers and I don’t know whether they are alive or dead.

"I don’t accept the government’s intervention on religion." 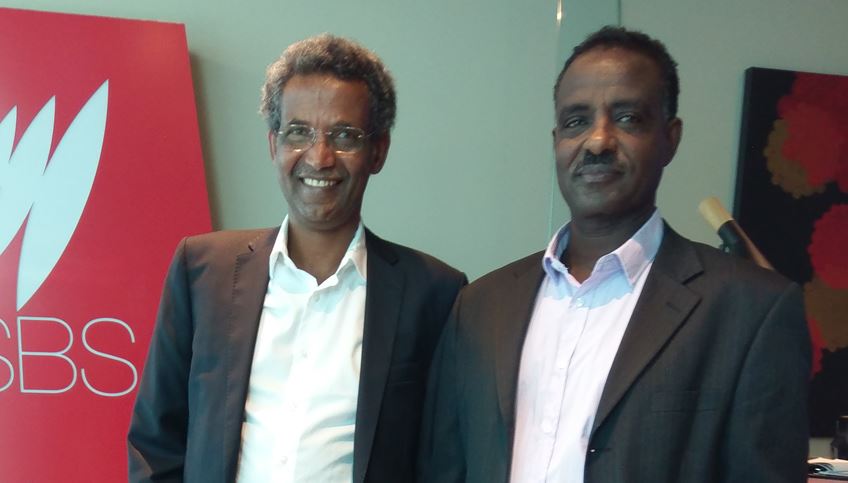 After he was alienated from his homeland, Fessehaie had to find a new life to support himself and his family. He studied for an MBA and worked as a consultant - and from 2003 he has been working as financial officer under the Australian Federal government in Canberra.

As to what he has planned for his future, Fessehaie says, "In Tigrinya there is saying; ‘ንዝገበረልካ ግበረሉ ወይ ንገረሉ’  - if someone has done well for you, in response you have to do similar good things to that person."

If you can’t, you have to tell people about what has been done to you.

"Great Australians have done many good things for Eritrea and me.

"And in my years of retirement, which I am starting now, I cannot begin to be able to do what Australians have done for Eritreans, but at least I will share the story and write a book about it."

Listen to the full interview (in Tigrinya) with SBS Tigrinya in the audio player, top. 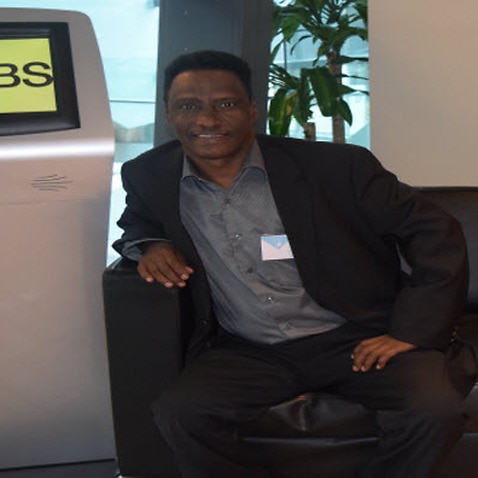 Once forced to create propaganda for their government, Eritrean artists are defecting to seek new lives in Australia