Melbourne comedian and writer Samantha Andrew only joined TikTok at the start of the year, but her videos have since had more than 28 million views. 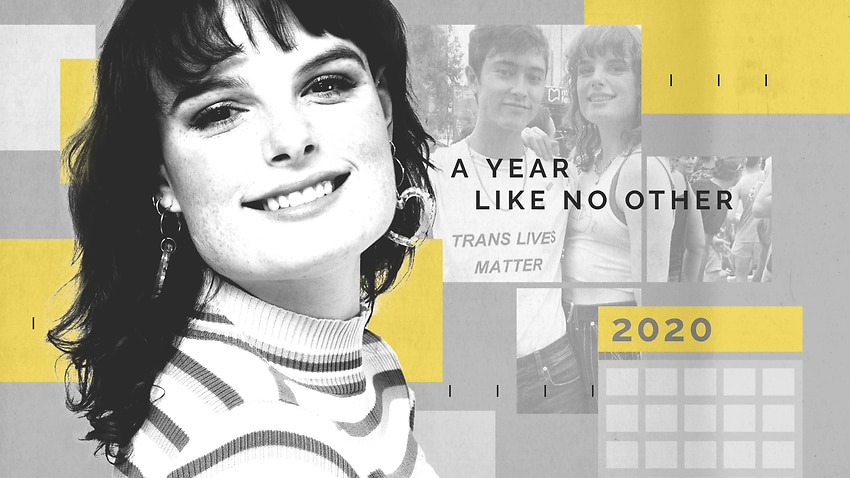 Samantha started 2020 working with two friends on a self-devised musical called Girls are Hot, which explored ideas of representation within queer communities.

But when the world went into lockdown due to the coronavirus pandemic, the show had to be put on hold.

Stuck indoors in Melbourne, the 25-year-old comedian and writer opened a TikTok account to pass the time.

“I remember watching the first few videos, and I was like ‘this is actually really funny’,” Samantha says.

But she didn’t expect them to travel as far as they did.

One of her first comedy sketches - a one-minute video reenacting what it was like to go shopping with your friends when you were 12 - went viral.

“I remember calling my partner and being like ‘oh my gosh, I just keep getting notifications every time I open my phone’,” she says.

The video had more than 100,000 likes and suddenly her account had 10,000 new fans following her, waiting for more.

Oh my gosh, I just keep getting notifications every time I open my phone.

With the popularity came criticism.

“Naturally, when a video goes viral, you get more of the comments from every man and their dog who wouldn’t usually comment,” Samantha says.

But she realised she now had a platform and, as well as comedy, she could use it for good.

Samantha decided to be open about who she was as a queer woman, and her relationship with her partner Cody, a transgender man.

She hoped being open about her personal life while running a comedy account would help remove some of the stigmas or misunderstandings about LGBTIQ+ individuals and couples.

“It removes that kind of heaviness and need for it always to be political,” she says.

“It goes, ‘no here’s just a person who makes funny videos on the internet. Oh here’s her partner, who just happens to be trans. And she happens to be queer’.”

In October, Samantha and Cody, 23, shared a video explaining their wish to have biological children in the future (see clip below).

Samantha would be carrying the child, she explained, and she hoped to educate her followers on the process.

“Cody is in the process of going off testosterone, and he’s already begun the process now so that he can freeze his eggs so that one day we can have a kid,” she says in the video.

“We’re obviously not going to be having kids anytime soon, we’re talking in the kind of 10-year mark. This is just the planning and preparing that he has to do.”

The video had more than 450,000 views with some viewers sharing their personal stories or asking questions in the comments section to learn more.

“We’ve had people comment on the video who are trans men being like, ‘wow I didn’t even know this was possible,’” Samantha says.

“The video could have gotten four views, and if it was viewed by four people and it changed their perspective and gave them some insight, then I’m happy.”

Samantha's TikTok account now has more than 140,000 fans, 5 million likes, and her videos have had more than 28 million views.

Samantha says she is keen to get back on the stage in 2021 and is working on a stand-up comedy show.

And she’ll continue to share her personal journey online.

“I hope it starts conversations in audiences that are younger, whose brains and outlooks are malleable, and can have a really profound impact on the next generation.”

Alysha Woodey is from Sydney. She completed her first year studying journalism, media arts and production in 2020 and developed her cooking skills during lockdown. She hopes to further her professional writing next year.

Read More
Coronavirus cancelled Tainga's big stage debut. Now he'll star in the must-see show of 2021
Read More
Alex needed to marry his fiancée to get her a visa - but they were 15,000km apart when coronavirus hit
Read More
2020 has been tough for nurse and activist Teresa, but fighting for her community is everything
Read More
After losing his legs in a car accident, Khoa wasn't going to let the pandemic beat him
Read More
Australian Olympic hopeful Tiffany put her life on hold for 2020, then the pandemic hit
Read More
Alex became a parent unexpectedly. He's cherished having family time in lockdown
Read More
2020 made Samantha famous. Now she's using her platform to support LGBTIQ+ couples
Share
Published 24 December 2020 at 3:07pm
By Alysha Woodey
Topics
IdentityAustralia