A political-aide could face prosecution over the video, which allegedly involves the man tipped as the country’s next prime minister. It is a disappointing step backwards, say LGBT rights activists. 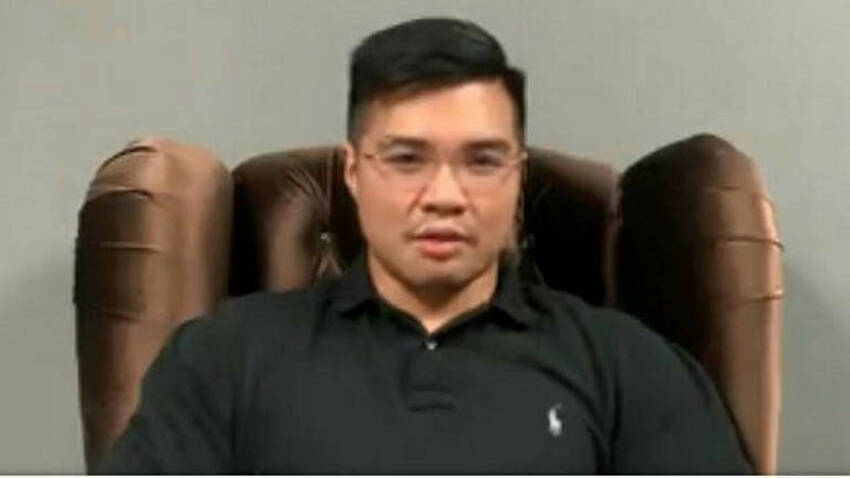 Political aide Muhammad Haziq Abdul Aziz may face charges after confessing to be one of the men in the video. Source: Social media

While countries around the world shake off colonial-era laws criminalising homosexuality, in the socially conservative Southeast Asian nation of Malaysia they are still being used for political ends.

This week, 27-year-old political aide Muhammad Haziq Abdul Aziz will find out whether he is facing prosecution over a gay sex video which has rocked the country's political establishment one year into its new administration.

In the early hours of Tuesday morning, a group of Malaysian journalists were added to a Whatsapp group by an anonymous number and sent three video clips.

The grainy footage of two naked men being intimate on a bed in what appears to be a hotel room alleged to show Malaysia’s Minister for Economic Affairs Azmin Ali, an up-and-coming politician often touted as a future prime minister.

Mr Azmin vehemently denied the allegations, saying he was not the man in the video and calling it “vicious libel”

Gay sex between men (broadly defined as ‘sodomy’ under colonial-era laws) is illegal in Malaysia and carries a prison sentence of up to 20 years.

But in the same week Botswana and Bhutan decriminalised homosexuality, and Ecuador legalised same-sex marriage, diversity advocates say the release of the video has shown Malaysia still has a long way to go.

“It’s disappointing to see Malaysia move backwards while other countries make progress in terms of decriminalisation of laws, non-discrimination and equality for all,” Thilaga Sulathireh a Malaysian LGBT rights activist told SBS News.

“The combination of laws that criminalise consensual sex between men and social stigma increases cases of extortion and violation of privacy, although underdocumented and underreported.”

“I think it is safe to say that we are not progressing.”

“It trivialises our struggle. Our fight for dignity has been reduced to a political chess play by the powerful elites,” he said.

Gay sex as a political weapon

It’s far from the first time sodomy laws have been used as a political weapon in the socially conservative Muslim-majority country.

Malaysia’s former opposition leader Anwar Ibrahim has been jailed twice on separate sodomy charges, both of which he denied and claimed were politically motivated.

In the late 1990s, Anwar was deputy prime minister and in-line to take over the top job from long-time strongman Dr Mahathir Mohamad. But the two fell out in 1998 and many in the public saw the sodomy charges, which sent Anwar to jail, as an orchestrated way for Dr Mahathir to bring down the political career of his former protegee.

In 2014, under Prime Minsiter Najib Razak, after leading the opposition to their strongest ever showing in the polls Anwar was again jailed on separate sodomy charges. Malaysia was ruled by one party for all of the 61 years since independence, until elections last year brought the opposition to power for the first time. Anwar was freed from jail shortly after the elections.

Last week’s videos spread through Whatsapp and then became prominent national news. The following day, political aide Mr Haziq released a video saying he was the other man in the video.

Mr Haziq - who works for another politician in the same party as Mr Azmin - claimed to have slept with Mr Azmin at a hotel on 11 May in the city of Sandakan, in Malaysia’s eastern state of Sabah.

Mr Azmin threatened to sue Mr Haziq over the claims.

“This is nothing but a nefarious plot to assassinate my reputation and character in an attempt to destroy my political career,” he said in a statement.

On Friday night Mr Haziq was arrested at Kuala Lumpur’s international airport attempting to board a flight to the Philippines.

He is being investigated for sodomy, as well as several cyber-based laws prohibiting the spreading of pornographic material and “inproper use of social media”. He was later released on bail.

Malaysian Prime Minister Dr Mahathir, who is in the top job again after switching to the opposition and leading them to victory at last year's polls, is considered to be a close ally of Mr Azmin.

Dr Mahathir has promised to hand over the post to Mr Anwar next year, but political analysts have long suspected Mr Azmin has ambitions to beat Mr Anwar to it.

Is the footage real?

Dr Mahathir has said the video alleging to show Mr Azmin is a fake.

“Nowadays, you can produce all kinds of pictures if you are clever enough. One day, you may see my picture like that too,” he said.

Kevin Nguyen, a digital forensics expert who has previously consulted and provided content verification for the BBC and the New York Times and now works for the Australian Broadcasting Corporation, analysed the three videos for SBS News.

“At an image level, forensically it checks out. I ran a number of forensic analysis … across the three videos and at the six points I checked there was no evidence of photo or image manipulation.”

Mr Nguyen said he could not rule out the video being a ‘deepfake’, a term for the fairly new artificial intelligence based technology which involves machine learning techniques to superimpose a face on a video.

Deepfakes were initially used to superimpose celebrities’ faces onto pornographic videos, but have since moved into the political realm.

But another expert, Giorgio Patrini, CEO of Deeptrace, a Netherlands based company specialised in working to authenticate deepfake videos, said the quality of the video resolution was too low to run a conclusive analysis.

None of the analysts could confirm that Mr Azmin is the man in the video, they only concluded the video appears to not have been digitally altered.

Denby Weller, from the University of Technology Sydney, who has trained in video verification with the Google News Initiative, said in a written statement other aspects of the video raised certain “red flags”.

“It’s been shot in portrait mode on a phone by the looks of it, although that look can be artificially created in post-production. It has also been shot from a slightly elevated position (the height of the camera is very hard to fake), which would indicate that the phone was pointing slightly downwards at the men,” she said.

Either way, activists say the national interest around this story can only have a negative impact on LGBT Malaysians.

“It is disappointing we are still trapped by the same narrative of 20 years ago, while other parts of the world have moved forward considerably,” Mr Numan said.

Members of Australia’s LGBTIQ+ community looking for support can contact these services collated by ReachOut.com