The lead construction contractor for a $31m Australian foreign aid project in Vanuatu claims it is about $5 million out of pocket. 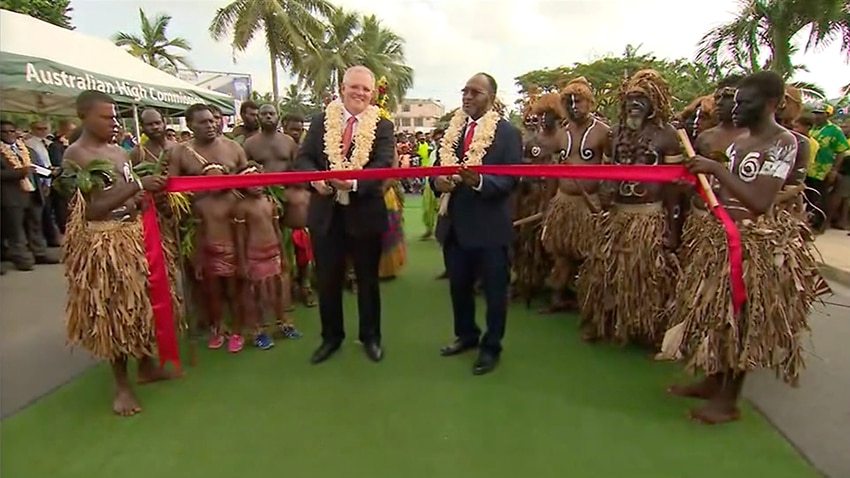 Australia’s flagship foreign aid project in the Pacific nation of Vanuatu has descended into legal acrimony with a Townsville contractor winning the right to sue for millions claimed in unpaid costs.

It promised to bring much-needed road upgrades, footpaths drains and sanitation to the 40,000 residents.

In a photo opportunity in January this year, Prime Minister Scott Morrison cut the ribbon with his Vanuatu counterpart Charlot Salwai for the Port Vila Urban Development Project (PVUDP) - but it was 24-months behind schedule and under-delivered.

The country’s Supreme Court on Tuesday rejected an application by the Vanuatu government to send the case to arbitration and instead set a hearing date for next year.

The court victory comes on the eve of a visit by foreign minister Marise Payne on Thursday.

The lead construction contractor for the project, Townsville-based RMS Construction and Engineering, claims it is about A$5m out of pocket.

“Our position has been vindicated and it shouldn’t have taken this long,” RMS managing director Richard McDonald said.

“Next stage now is the court hearing in early February.”

Supreme Court Justice Viran Trief in a judgement on Tuesday ruled under the terms of the contract, the Ministry of Public Works and Utilities should have paid earlier this year, but has not, and the Australian company has the right to sue.

She further rejected the Vanuatu government’s position the claim should first go to arbitration, adding it had made no effort to start an arbitration, the nominated Singapore tribunal was expensive and the outcome non-binding.

In August, SBS News reported on the start of legal action by RMS and Mr McDonald’s written plea to Mr Morrison and Ms Payne for assistance in getting paid.

Mr McDonald said the whole contract was “a shambles” from beginning to end and RMS had not received assistance from DFAT to recover monies owed.

Despite Mr Morrison opening the project, the Australian government has no direct responsibility for it.

In 2011, Australia granted the $31m to the Asia Development Bank to manage and finance the project, the ADB funded the Vanuatu Government, which then, in turn, was responsible for contracting RMS to do the construction work.

After Cyclone Pam in 2015, the focus of the PVUDP was to fix the capital’s dilapidated roads, provide footpaths with ramps for the disabled and install new drainage, sanitation and toilet blocks.

“This is a contractual issue between RMS Ltd and the Government of Vanuatu,” said the Department of Foreign Affairs (DFAT) in a statement to SBS News in July.

The Vanuatu Project Management Unit responsible for the contract has previously declined to comment.